Few beings in the world of Orr are capable of inspiring both dread and veneration, but the Baba Yaga is one such being. She has appeared in the folk tales and legends of Orr since the very dawn of the civilized age and each race possesses some version of her among their oral and written histories. These various manifestations among the people of the world have created a convoluted narrative and exaggerated history of the character, but some facets remain true no matter where the tale is told.   The Baba Yaga is said to be the first of the Fey. The Grandmother of all that dwells within the Feywild. She is a cunning being with a capricious nature who revels in the comeuppance of mortals and immortals alike. The Baba Yaga is described as a supernatural force, sometimes even as the "breath" of the Feywild, and while there are tales of mortals 'slaying' her, such a hollow victory is historically short lived, and the miseries inflicted on those who who threaten her has been the ruin of entire generations of a familial line. The Baba Yaga is capable of foretelling future events, but often misconstrues these portents so that they unfold in an unexpected way. In dealings with the Baba Yaga it is said that she can innately know when a lie is being spoken to her and while she is not bound to tell the truth, she is said to always keep her word. The Baba Yaga possess incredible magical prowess, possibly even powers that can alter reality itself, but never wields it frivolously. She is the mother of many Fey species, but most notably the creatures known as Hags whom revere here as Granny Blackmoon. To encounter the Baba Yaga even in passing is said to be a terrible omen of miseries to come, but if one can manage to satiate whatever appetite she has when reaching the threshold of your door it's said that she may watch over and protect your family in troubling times as reward.

As a being of the Feywild and a especially supernatural creature of the world, the Baba Yaga is said to be able to take many forms, whether humanoid or beast, but is most often described and depicted as an human crone with long, wiry grey hair, covered in warts. The Baba Yaga's unassuming visage is often the catalyst for many of her tales in which her mistreatment by mortals leads to their sorrow, and is perhaps chosen as a cautionary parable to respect one's elders or that life is short-lived. When appearing as an animal The Baba Yaga is known to take the forms of black birds and ravenous wolves.

There are no known limitations to the Baba Yaga's power but there are certain spheres that she occupies and maintains, in the same way that perhaps the Endless preside over their domains.   The Baba Yaga seems to only appear and interfere in the lives of those living in the rural areas of the world. Perhaps the on-goings in cities and larger townships make it more difficult for her to trample upon the livelihoods of mortals there, or because she acts as a kind of emissary of the untamed wilds and the unknowns that still reside in the world. The Baba Yaga can alter reality and does have great magical prowess when pressed, but most often she prefers to twist lives and wrinkle fate, often in a way that preys upon her victim's flaws and fears. While there are tales of the Baba Yaga eating children, who she seems to especially despise, this may simply be leaping connection to Hags which she is the grandmother of. Rarely has the Baba Yaga been recorded as outright killing mortals. Instead she prefers to see them die at the hands of those they have wronged or torn to shreds by wild animals. The Baba Yaga is known for many curses, most especially the curse of Lycanthropy which in the early eras of the world was often placed upon soldiers or mercenaries who raped women during their pillaging. 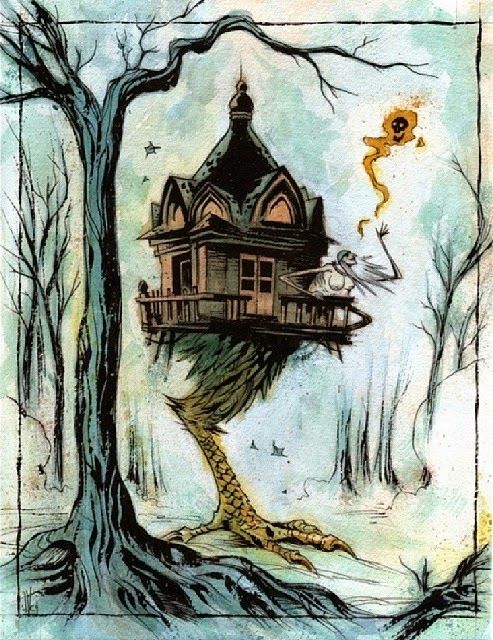 In many stories the Baba Yaga flies inside a giant mortar pestle, or upon a broomstick, which is where those instruments have often gained their reputation and connection to witchcraft, but the most notable object among the mythology of the Baba Yaga is her house which is said to travel on chicken legs.   Because the Baba Yaga is associated with many creatures of the Feywilds and also many other creatures that cause misery, she is said to possess and bestow certain objects. These tales vary from culture to culture, but some of the artifacts that folk lore has recorded is a chest where she stores stolen shadows, a pair of silver scissors that can cut the life thread of any creature, a mirror that blinds anyone who looks upon it, a cauldron filled with the diseases of the world, bed sheets made of maiden's hair, and a spice box filled with ingredients that can cause or cure any curse.

What an amazing, multi-faceted character! I found myself admiring her and at the same time fearing her, because she seems to punish people for wrongdoings yet those are wrongdoings of the kind that are easy to commit without thinking.   The art is very beautiful, too. This deserves tons more likes!

Thank you! I appreciate the time you took to read it. I'm hoping to add some of the in-world myths and fables to this article eventually, but I've got a lot more to do for WorldEmber2018. :)

Now that i'm not on mobile, but on desktop, I would say try to break up the wall of text a little. Maybe a quote of someone talking about the baba yaga, or simply more paragraphs in the text or bbcode-br before or after a headline to give more space. Makes it easier to read for me :)

The opening text alone is worthy of a like, but the whole thing is very well-told!