The mushple container, broke at some point in the hundred years that was buried deep in the cave, and the harvesting machine did its best to protect the samples, using the component of the broken container to facilitate the growth of the mushple. As a result, the mushple mutated into something different, stronger and more vast in its impact on life.


-Boss, we found something in the cave. It's a forest of mushrooms, we think.
-That's not the precious metal we were expecting to find. Why are you bothering me?
-I'm sorry, boss, but this is important. There is nothing like this anywhere.
-Well, maybe we could make profit from it. I'll send the experts.
— A boss in Big Dreams

The forest that sprung deep in the caves is an occurrence only possible by the meddling of the explorers that took away the first generation of mushples but left behind the technology that changed the environment of the cave and the specimen itself.


Most mushples now are between 30 and 45 cm high and cover the entirety of the forest soil, but the novelty is the giant trees that feed from and to the mushples in a perfect symbiotic relationship. One cannot exist without the other. The bark of trees is covered in a glowing orange sap. The fluid is warm to the touch, and its sweetness lingers in the air.


There is one more living being that mutated thanks to the intervention of the harvesting machine left behind: fireflies. Now they help to spread the spores to deeper places into the caves, making the forest bigger and stronger. The robot left behind long ago ceased functioning and delegated this task to the fireflies.


When the fireflies were released to the surface, after the explosion, the spores they carried spread and multiplied in the air and the water. The mutations helped them to survive and adapt to new environments: human bodies. They didn't cause any harm or diseases, but on the children's bodies performed a transformation that no one could foresee. It gave them Superpowers. Of course, all this information is secret, and the profits are private. 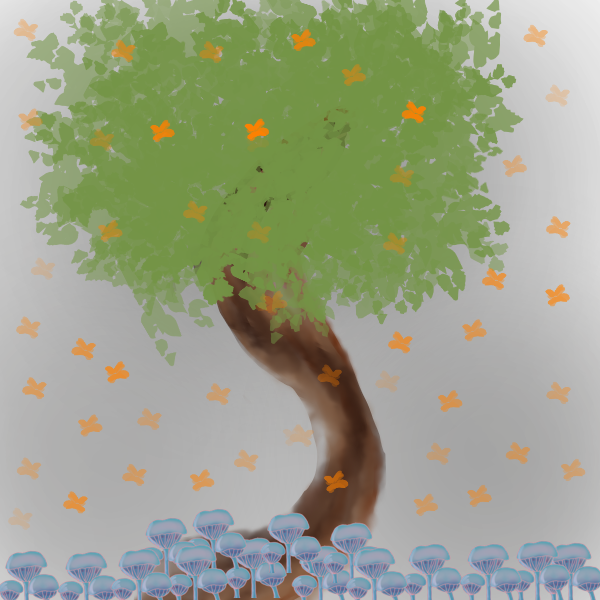 A container with only one task.