When one travels to the continent of Pavanor it is best to know some Pavan. As the lingua franca of the region it is thought in most countries there and knowing it can give merchants travelling there an advantage. Although it is only in the Pavan Empire the main language, it is still spoken in other neighbouring countries.   As it is a language that was derived from the ancient Avaronian language, it has some similarities with language that share the same origin.

Pavan is one of the languages that originate from the Avaronian language. It shares this language family with Varenan and Median.   By the time a wave of independence hit Pavanor, all prior languages of the area were lost. When the Pavans finally freed themselves from the Avaronians they chose to use their own dialect of Avaronian as the official language instead. As an act of defiance , however, they adopted a new script which was a more simplified version. 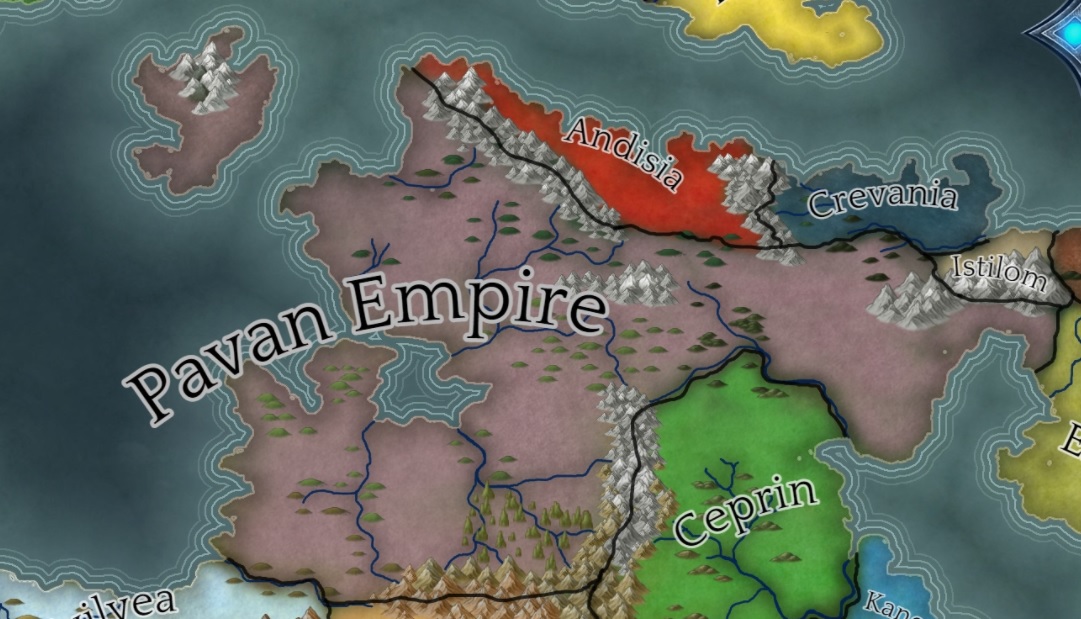 Pavan Empire by Kefkejaco with Inkarnate

With the Avaronians gone the people of Pavanor were finally able to form their own nations. This did not last long since one nation, led by the son of the prophet Archon, conquered the other nations and formed the first Pavan Empire. This led to their dialect becoming the dominant one, which would eventually evolve into the Pavan we know today.   As the hatred for the Avaronians was still strong several decades after the Pavan Freedom, an invasion was planned of the Farlis continent to strike the, to them seen as devilish Avaronians, in their heartlands. The Avaronian's continued used of Human slaves fueled the fire of this war even more.   The war proved to be succesful at the start and the Humans living alongside Farlis' eastern coast were freed. With the fall of the Avaronian capital, Bagor, the war ended. Not long after the Pavan Empire was forced to grant independence to the realms it conquered in Farlis due to internal strife. The new countries that arose in the region took on the Pavan script but continued using their own dialects.

The Pavan alphabet is the main alphabet used by the Humans of Niorath. It is very similar to orignal Avaronian alphabet with many letters closely resembling each other.   There are however some letters found in Avaronian which do not have a counterpart in the Pavan script. These are often written as multiple letters but the pronunciation of words containing these still resemble the Avaronian pronunciation.   Another thing the Pavan script got rid of is the extra letters used for elongating letters. In Avaronian a letter is added to make the vowels long whereas in Pavan this is done by adding an 'i' at before the vowel. For consonant the Avaronians used their letter "tɕi" after a consonant while the Pavan script achieves this by just doubling the same consonant.

In Pavan the plural depends on how to word ends.

In Pavan verbs always tend to end in two ways:     This form is the present/ future form of the verb and can be used regardless of the subject. Both forms have different conjugations depending on the tense.

Will be added soon