Charming and eloquent, some might claim that with his sweetest of words, Beldaragh Voidthrone could very well make the sun descend down to the Underdark just for him. Beldaragh is the oldest of the kids of matron Alauraeva Voidthrone, and has received some of her wit and eye for opportunities.

Beldaragh's resourcefulness has earned him his mother's appreciation, and a permanent place in her palace. He has often made situations turn to the family's favour, and watched an eye of several women, and has gotten the prestige from several children. But alas, Son cannot get too far without getting married, and it is questionable is that always something he enjoys, as grateful as he is from his privileged position.

Lately Beldaragh has been very entertained by the antics and pursuits of his daughter May'chalithra. The city of Netehdrez has become a very interesting place lately!

In the game, Beldaragh is the biological father of May'chalithra Palefury and has thought her his bardic skills. He is particularly fond of May, as she is the only one of his children he has had a proper parental relationship with. He is guilty of taking his daughter's side almost on any opportunity, though does his best not to mess with the family's business.

In the year 3815 AoS, House of Voidthrone was struggling: Matron Nalzynerae had already lived over 700 years, and as impressive it was, she was starting to really succumb to the visions memory shroud. As her state was weakening, her daughter Sabess'xaelay had taken more and more of her responsibilities, and had recently allowed her sister Alauraeva to marry you paladin Divin from house Soulkeeper. 20th of Apren, Alauraeva gave birth to her firstborn child, boy she named Beldaragh.

Beldaragh grew up during this chaotic time in the family when the brilliance of his grandmother Nalzynerae was fading, and the change of power was inevitable. But tragedy struck from an unexpected angle, as his aunt Sabess'xaelay died suddenly in 3837, followed by Nalzynerae just a year later.

The family was in chaos, as they were deciding for the next matron, and it was Beldaragh whom, surprisingly, ended the conflict. While not the oldest of the possible heirs, Alauraeva was the oldest female relative with any children, and thus she took her place as the head of the family.

Young Alauraeva tried to do her best to fit for her role, and Beldaragh had an important role to play in that. The charming young man became eyes and ears as well as a spokesperson to his mother, showing talent with people. As he grew older, his presence was wanted by several important women, bringing prestige to the family as a talented bard, and fathering several children. He would later to be tasked to train his younger brother Jardanas as well as his daughter May'chalithra Palefury.

Beldaragh has a close relationship with his mother Alauraeva, and has great respect to his father Divinerd. He has one full sister Vlonshaleena, and two half siblings, Vicdariina and Jardanas. He has spent a lot of time with Jardanas, whom he has trained in bardic arts. 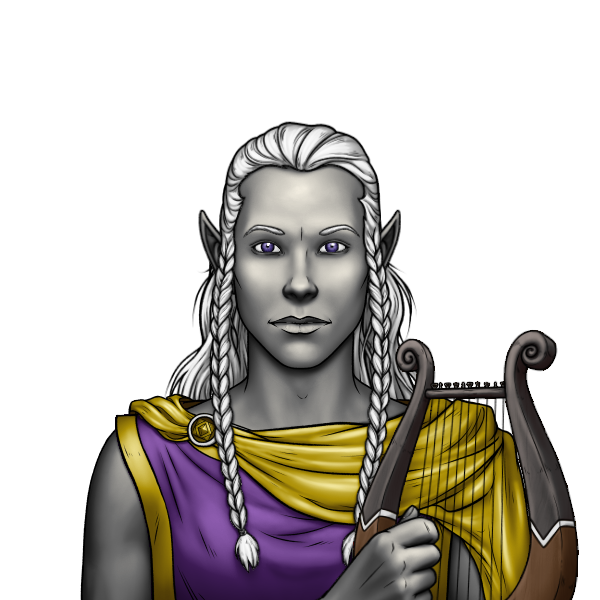