Vasilisa was born into a family of Friaziny merchants, then married off to her Norik husband, who was a Strelok for the boyar Boris Bobchinksky, who controls a large (though sparsely populated) pogost in the Dominion of Great Krinets. Through him, she picked up her talents as a ranger, took well to it, and was happy. Vasilisa's family was involved in the slave trade, and one of the reasons her family married her to her now deceased husband was because, as a frontier guard for the local ruler, he had access to soldiers who could be ransomed or sold as slaves. Now she tends to sell animal wares with her skills as a Lovchii.   However, her husband was called to guard the borders of her lords region against a foe. Vasilisa worried that this would lead to her husband's death. She begged him to stay, or run away with her somewhere else, but his honor wouldn't let him agree to her demands.   Inevitably, word reached her that her husband had fallen in battle. Unable to cope, she left, returning to her family's business, and seeking meaning to her life. It was in these travels that she learned the many languages of the creatures of the old traditions.   Intending to return to the great city of Krinets, where her father's family had a base, left her home. But she soon came upon a creature named Oniric Shadow, who claimed to be a princeling of the chud' people - a childlike Fair Folk which had nearly vanished from the affairs of humans. Oniric seemed inoffensive enough, but he was clearly spying and poaching on Bobchinsky's pogost, and told Vasilisa that his family did not recognize the human ownership of these lands. Though she did not intend to return to her old life, Vasilisa's sense of duty required that she make a detour to turn Oniric over to her former lord. However, as she traveled to his estate, she was scooped up by Baba Yaga, and, together with her prisoner, was taken to the crone's hut, somewhere very far.   Placed in a room with her prisoner for several days, she questioned him further about his family in the distant north, and their interest in the lands that humans now called their own. But she soon learned that Baba Yaga had her own concern about Oniric and the Shadow family. In her telling, their tsardom lay near the Northern Sea, and in proximity to the legendary Island of Buyan, where Baba Yaga had hidden the death of Koshchei - the Dread Lord. For many years, the Shadows helped Baba Yaga keep the approaches to the island safe and secret. But recently, she had learned that the Shadows were conniving with Koshchei behind her back. She had brought Vasilisa with her to ask her to travel to the Realm of Shadows, and learn the truth of the matter, while Oniric remained a prisoner (and possibly, hostage) in the hut.   While in the hut, Vasilisa also met other people, apparently in Baba Yaga's employ - a responsible (albeit eccentric) mage called Chonkorchuk, a friendly half-polevik healer named Plamen, and a widely traveled though childish entertainer named Sasha. These people were being sent on the mission north, along with Vasilisa. With Sasha, she also translated a scroll for summoning Koshchei in order to learn who had been disseminating it.   Baba Yaga sent the group first to Krinets, so the companions could outfit themselves for a long trip. Outside the city, they met a man named Tumma Keza, who offered to become their guide. In the city, Vasilisa also tried to reconnect with her family and their business contacts, as well as to take the opportunity to sell some destitute refugees to a local contractor in order to make some money. The contractor, named Rogdai Siverskii, also introduced the companions to a lordling named Sergei Reznikov, who allowed them to glance into a magic mirror that showed a murky future. But as they prepared to leave, strange forces also moved to thwart them, and they were attacked in the street by creatures who were less than fully human. The use of magic against the creatures brought the unwanted attention of the city authorities. And on top of that, Vasilisa had started to develop a rivalry with her companion Sasha, who was kept putting the party in danger by being too promiscuous, and talking too much. 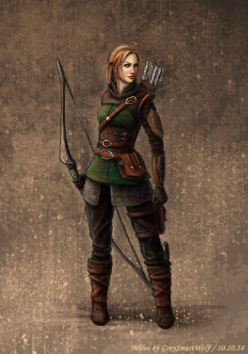