Broad-shouldered, with a large grey beard, despite his relatively young age. 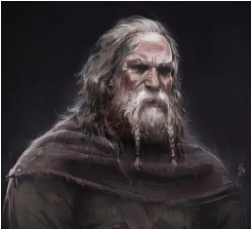