A Stug III tank that fled society after the war due to rejection by humans in his community, and found himself in a feral pack.

Hoss was a well maintained tank during his time in the war, so that means he doesn't have that much noticeable damage with the affected sites either being filled in or replaced. Currently, though, he's started to rust; in some places quite severely, and has the telltale accumulated plant growth of a feral MAI.

Beyond the obvious characteristic being his type of tank, he also has a beige and tawny brown striped camouflage scheme across the entirety of his hull, and kill tallies on the left of it. That, and his optics, in which despite green being a common color, his are oddly dark, whether that be by design or something else happening to them. 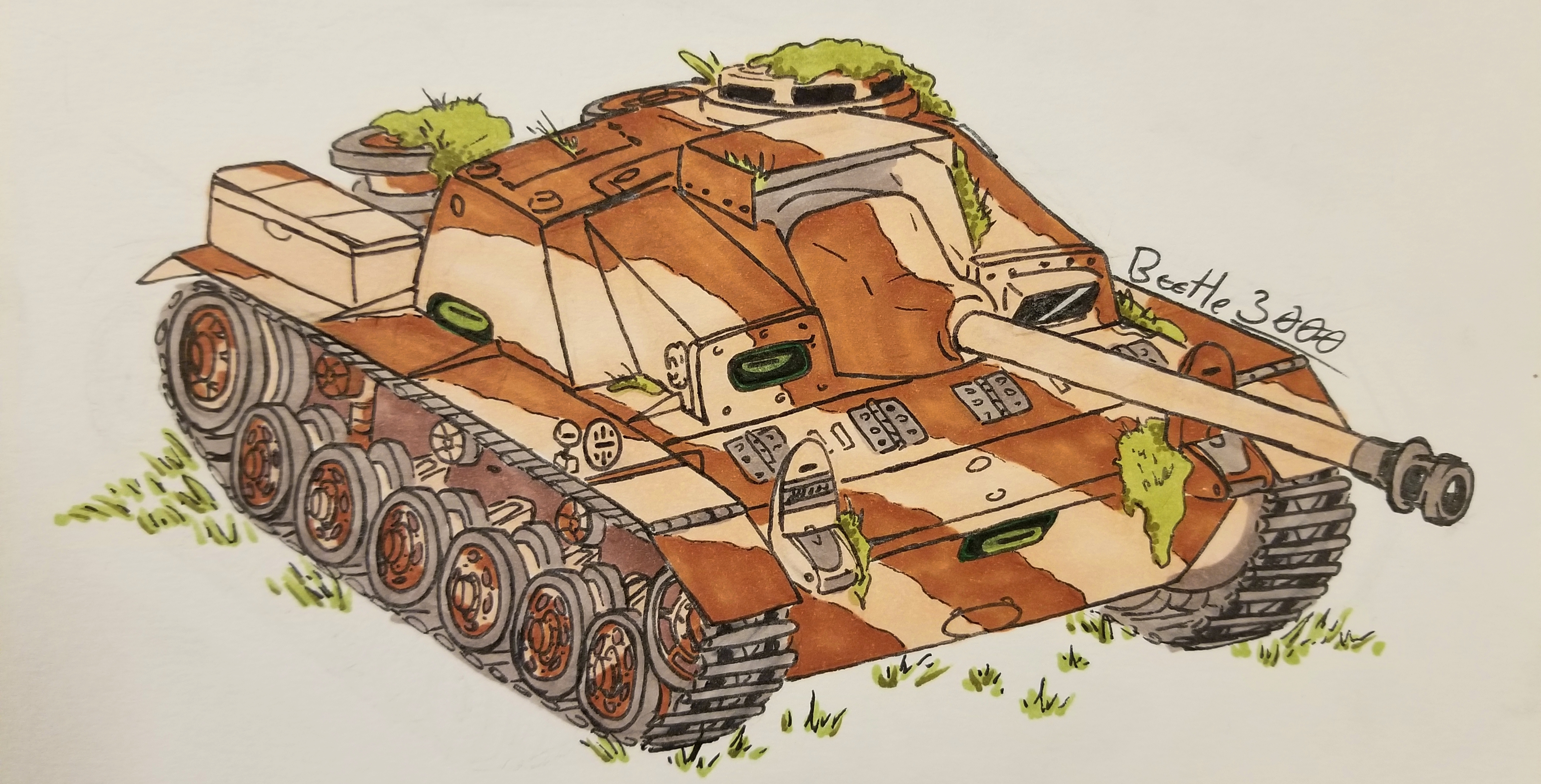 It isn't all that often that he'll make too much effort to face people when talking to them. Not that he's trying to be rude, but it's a lot more tedious to do when you have to turn your whole body just to do so; one less serious disadvantage of not having a turret. Besides, he has eyes all over him anyway, right?

Hoss, despite holding out in the war until the end, was generally only... tolerated. by his crew. He was well maintained, socialized enough, but it was evident that they were just doing what they needed to get him through in one piece. Everything about his early life was, well, average. After the war, though, when the majority of people had no idea where MAI were going to go, in the midst of all the fighting over what was to become of them, Hoss had finally had enough and saw his only means of escape to be what he'd seen (rarely, albeit) other MAI do, flee to the woods. Maybe He'd find other units out there? He wouldn't know unless he went for it, and it felt an awful like now or never. He made the decision to leave, and once everyone at his base was settling down for the night, he left.   He, too, eventually found himself in the midst of Nikita and Adrik's pack, and promptly desired to gain their trust. Seeming oddly desperate to the rest, it was Apollo who convinced them to let him stay because he was able to sympathize with his confusion from the end of the war, and in this, the two became particularly good friends.

Outside of interacting with other LAI, he's a quite reclusive tank. He's not scared of humans; it's more of a... distaste. Beyond what had to be done to keep him fighting, he'd never met a human that really cared about him, and look at post-war! There were literally fights over whether or now they should just be kept at bases, or shut down, or something along the lines of that. He just couldn't find the capacity to open up to other humans when they did... that. Yeah, they can be good, but they're far from saints.