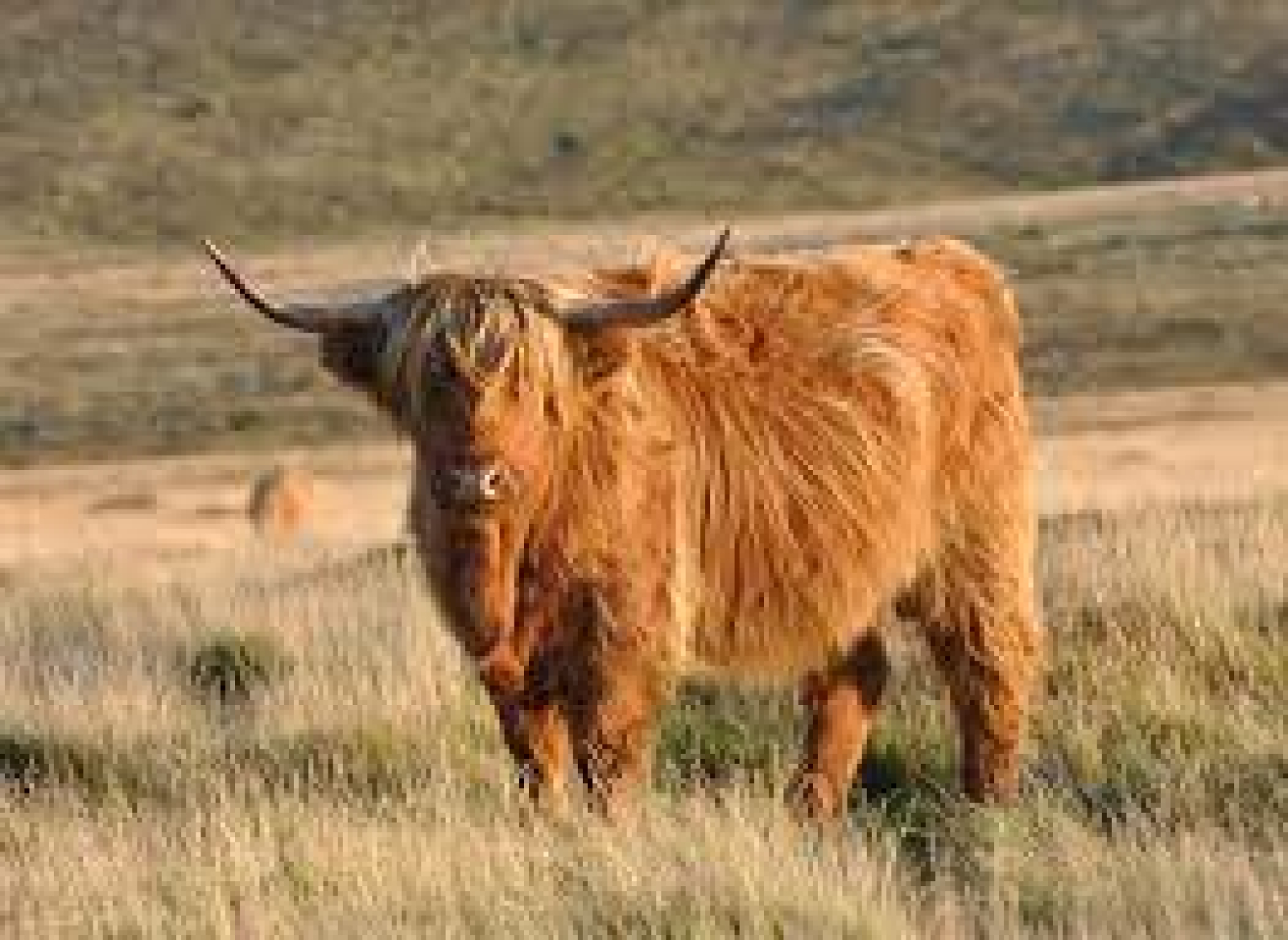 The Long Haired Highland or the Amorian Highland is an Amorian breed of rustic cattle. It originated in the Amorian Highlands and plains, and the hills and mountain foothills of Amoria and has long horns and a long shaggy coat. It is a hardy breed, bred to withstand the intemperate conditions in the region. Their are two types, a smaller breed from the hills and mountain foothills, usually black, and a larger breed from the Highlands and plains, usually dun, tan, or red. It is reared primarily for beef, used on farms to pull ploughs, and used as a pack animal for merchants, and in later years were exported to several other countries. 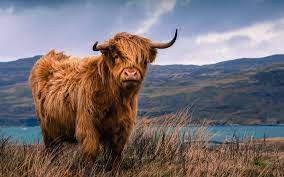 Highland cattle were historically of great importance to the economy, with the cattle being raised for meat primarily, used on farms to pull ploughs, and used as pack animals. When trade began between other tribes, then nations they were first sold to Azuria, and Northern Pelosia, then later across the sea to Pelosia, Elosia, and Gondonia.   The Amorian Long Haired, originating and living mostly in the hills and mountain foothills, which had harsher conditions. These cattle tended to be smaller, to have black coats and, due to their more rugged environment, to have long hair. These cattle were named due to their location.   The other breed were long haired and horned, and tended to be larger because the pastures of the Highlands provided richer nutrients. They came in a range of colours, most frequently dun or red. These types have now been crossbred so that there is no distinct difference. 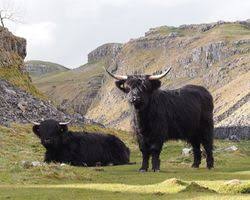 
You will know an Amorian Highland when you see one

They have long, wide horns and long, woolly coats that are coloured red, ginger, black, dun, yellow, white, grey, or tan.   They have an unusual double coat of hair. On the outside is the oily outer hair—the longest of any cattle breed—covering a downy undercoat. This makes them well suited to conditions in the Highlands, which have a high annual rainfall and sometimes very strong winds.   Their skill in foraging for food allows them to survive in steep mountain areas where they both graze and eat plants that many other cattle avoid. They can dig through the snow with their horns to find buried plants.   Mature bulls can weigh up to 800 kilograms (1,800 pounds) and cows can weigh up to 500 kilograms (1,100 pounds). Cows typically have a height of 3 to 3.5 ft, and bulls are typically in the range of 3.5 to 4 ft. Mating occurs throughout the year with a gestation period of approximately 277 to 290 days. Most commonly a single calf is born, but twins are not unknown. Sexual maturity is reached at about eighteen months of age. Highland cattle also have a longer expected lifespan than most other breeds of cattle, up to 20 years, sometimes nearer 30 years has been known. 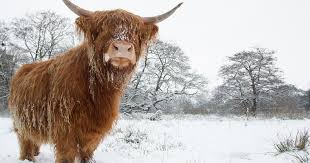 Long Haired Cattle in the snow by rabbies
They have a docile temperament and the milk has a high butterfat content, so have traditionally been used as house cows. They are generally good-natured animals but very protective of their young.   Originally, small farmers kept Highlands as house cows to produce milk and for meat.

Mating occurs throughout the year with a gestation period of approximately 277 to 290 days. Most commonly a single calf is born, but twins are not unknown. Sexual maturity is reached at about eighteen months of age.   The Breeding season is between Rains (May) and Eath (June), with cows first giving birth at 2 to 3 years old. 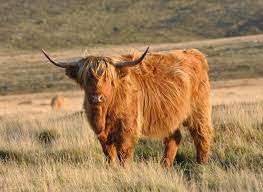 Long Haired Cattle by en.wikipedia
Lifespan
20 to 25 Years
Average Height
Cows typically have a height of 3 to 3.5 ft, and Bulls are typically in the range of 3.5 to 4 ft.
Average Weight
Mature bulls can weigh up to 800 kilograms (1,800 pounds) and cows can weigh up to 500 kilograms (1,100 pounds).
Body Tint, Colouring and Marking
They have long, wide horns and long, woolly coats that are coloured red, ginger, black, dun, yellow, white, grey, or tan.
Related Ethnicities

All cattle cope relatively well with low temperatures but Highland cattle have been described as "almost as cold-tolerant as the Far Northern-dwelling Elk and Deer". Conversely due to their thick coats they are much less tolerant of heat. Highland cattle have been successfully established in countries where winters are substantially colder than central Amoria such as the Northern Wastes and Northern, or Upper Amoria and beyond.

A herd of Highland cattle were found to have a clear structure and hierarchy of dominance, which reduces aggression. Social standing depends on age and sex, with older cattle being dominant to calves and younger ones, and males dominant to females. Young bulls will dominate adult cows when they reached around 2 years of age. Playfighting, licking and mounting were seen as friendly contact.

The meat of Highland cattle tends to be leaner than most beef because Highlands are largely insulated by their thick, shaggy hair rather than by subcutaneous fat. Highland cattle can produce beef at a reasonable profit from land that would otherwise normally be unsuitable for agriculture. The most profitable way to produce Highland beef is on poor pasture in their native land, like the Highlands of Amoria. 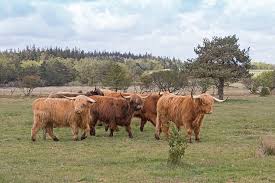 A Herd of Long Haired Cattle by wallpaperflare

Answering: "a species of working animal"
Visit Loremaster Aemon's Competition Page Check all other answers to this prompt Competition Homepage

Highland Beef! Onery on the Hoof!   Love it, my friend. Keep it up! I always look forward to seeing what you add to your world.

Thanks Buddy,   Yeah got to have a bit of beef on the menu. Thanks for the Fave/Like as always, you know I appreciate you reading and commenting on my articles.   Aemon