The city of Kalnathan is a small one that was on the very edge of the royal lands before the war. Lacking supporting infrastructure it fell into disrepair and abandonment after the war. Even before then, however, it was often shunned and had a reputation for strangeness. Now the empty and ruined streets are the haunts of feral tribes of men, savages who prey on each other and on any rash intruders. 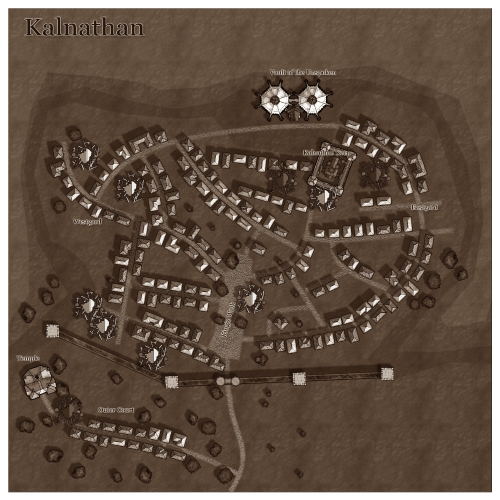 Within the city still stands the twin-spired library, the Vault of the Unspoken, and among the rare tomes still kept there are some that were forbidden and secret for their foul magical contents. The scholars that make their home in the Vault of the Unspoken know of this and do not encourage visitors. Those that do find their way into the sealed Second Spire however may be confronted by wraith like apparitions who will jealously protect the contents. If an intruder makes their way to the lowermost vault they will find a powerful grimoire… and the vile gelatinous beast that was once called up by the rituals within. Practically unstoppable, this shoggoth will be a dangerous foe not only to the explorers but to all human life in Kalnathan.