Our kin rule with fist of iron. They do not want freedom. They fight. They kill. They breed. Is no breaking cycle they live. We try to make new life, out of cycle. We study book. We learn magic. We call on patron for help. They laugh, they fight us. We get away, ask big country for help! ...They also laugh and fight us. Is ok. We survive, we stronger and smarter. Big country come back. Offer land, so we can have home. It is not good land, but we make it good. We have home, and that be what matters.
...Even though big country still laugh at us. And other orc try to kill us still. We be happy with home.
— Dukhesh Hexweaver

Traditionally, orcs are extremely violent creatures. The need for domination runs in their blood, and their cultures are based on force. The weak are cast out to die alone; the strong live in chaotic tribal communities where law seems a thing of myth, ruled over by the group's strongest fighters.   One particular outcast, Dannek the Weak, was unhappy with these traditions. Though he had been born to one of his tribe's greatest fighters, he had little interest in fighting. The realm of magic seemed alluring to him, and as he peered through the many stolen books his tribe used for kindling, his knowledge grew. Unfortunately, he couldn't keep this hidden forever - and it did not take long for him to be discovered. Broken and scarred, he was thrown to the birds.   But news of his magical power had already spread past the tribe, and other outcasts came to his aid. They banded together as blood brothers and sisters, forming a group of their own, and reached out to the peaceful countries nearby - the Vostene Republic and Ordan, in particular. They wished to become citizens, or to gain a small area on which they could live.   They were summarily refused. This did not stop them from asking.   After a few years of their pleading, the governments had had enough. Reluctant to resort to genocide, they instead agreed amongst themselves to solve an ongoing land dispute by giving the land to the orcs. It wasn't an excessively large piece of territory, and most considered it unlivable - without natural farmland or significant rivers, few could inhabit the area. But orcs were known for their hardiness, and besides, the Yltic were excited to finally have been listened to. They named their country Ylt, after the orcish word for Free.   Since then, they have been the mockery of the surrounding countries. Their former tribes regularly raid the area, forcing the Yltic to walk further down the paths of magical study to defend themselves. They receive invitations to ceremonies and events from the countries nearby - including from the Aletheian Empire - but their input is very rarely considered; they are usually considered to be an international joke.   Aside from the brutal mockeries, Yltic orcs have developed their own shamanic forms of magic and have drawn the attention of patrons seeking to bind new witches or warlocks. Whilst studies of traditional wizardry don't work out for many of the orcs, sorcery and the twisted magics practised by the arcanists both flowed through their veins with ease, and no god would deny divine spells to those willing to worship and follow the codes of clerics, paladins, warpriests or inquisitors. In fact, the Yltic pantheon contains a wide variety of interesting deities from across the world, as their minds are open to anything they perceive as intriguing - a fact that has allowed them to be exploited by numerous evil deities, from demons to the incomprehensible outer gods.

Yltic orcs use names derived from Orcish. Their names are generally between one and three syllables long, and use blunt syllables, akin to traditional Dwarven names. Female names tend to end with vowels. Grumma, Ulumpha, Lagakhu, Shargami and Shele are examples of orcish female names.

Unisex names don't exist due to Orcish naming conventions. The closest that can be gotten is through using the other sex's naming form, or through using a name from another species.

Instead of traditional surnames, the Yltic use a combination of words to indicate their interests as their last name. These are usually in Common, but occasionally Orcish words will be used. 'Spellreader', 'Inkwriter' and 'Scarmaker' are each examples of this.

The birth of a new orc is announced with fireworks and the mother is considered a wounded, but victorious, soldier - a status that affords her respect amongst the orcs. In Ylt, she receives careful treatment and is gently welcomed back into society as she recovers from the usually-vicious birth. Mothers that pass away in childbirth are revered as saintly spirits of motherhood, and their children are considered blessed by the gods to have survived the struggle.

Upon adulthood, a Yltic orc is given their first weapon and a quillpen in part of a quiet ceremony. These are generally awarded either by their parents, or by the tribe's leaders, and are representations of their skill in battle and the importance of knowledge to their country.

A Yltic orc, upon death, will have their deeds commemorated in scrolls stored in the Vaults of Ylt. Their family and friends will burn the body upon a funeral pyre, before celebrating their life in parties and drink. Significant orcs, such as ambassadors or war-chiefs, will receive parties that can last for up to a week.

Burning a book or otherwise tainting information is considered heresy and will result in execution. Entering someone's house without permission is horrifying, and approving of elves or dwarves is considered unnatural.

Yltic orcs value bright colours and natural materials. Their clothes are often dyed natural fabrics and wool, usually arranged into robes and sometimes interwoven with metal armour. Natural beauty is often based on tusk length and knowledge or magical skill, though strong fighters are also appreciated. The same standards apply to both genders.

A fair cry from traditional orcs, Yltic women are respected for their knowledge in a wider range of subjects than many men (due to their child-rearing experiences). Women are responsible for the general education of children, whilst men usually focus on physical training. Due to the tribal mentality, this is a group process and no eyebrows are raised if roles are traded between couples. Gender is not considered an issue by any standard.

Flowery poetry, gifts of books or weaponry, or other interesting items are usually used as a declaration of intent. Courtship tends to be quick; orcs do not care for drawn-out relationships.

Marriage is a rarity in Yltic culture. Instead, love is considered free - and is actively shared between any adults. Courting another orc is generally indicative of wanting to make a child, but some orcs have adopted the relationship standards of other races and do practice exclusive relationships. 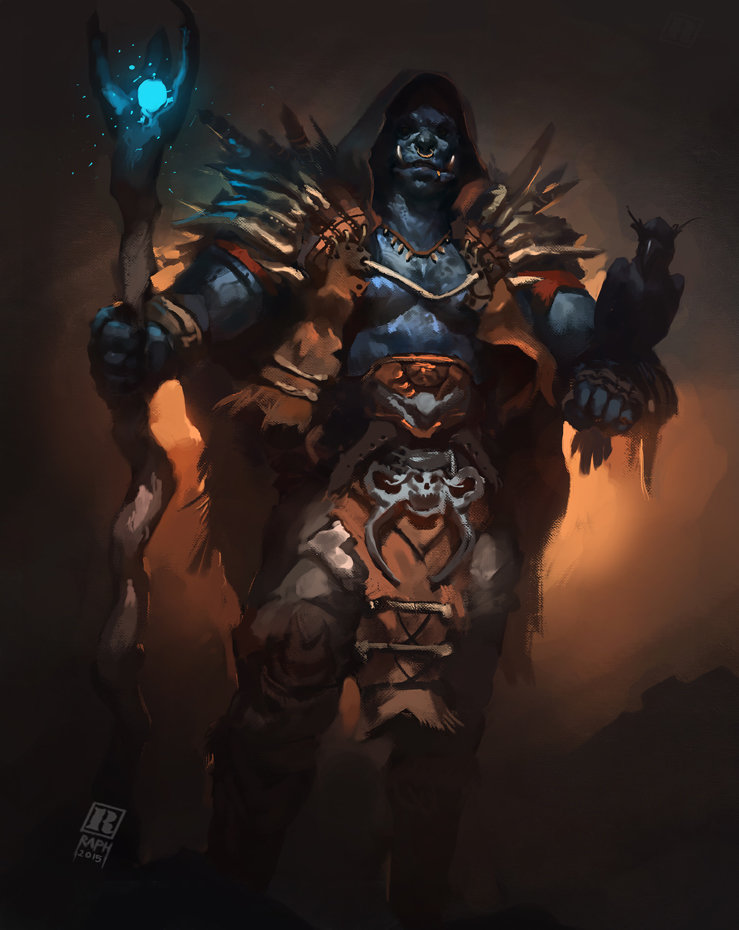 Love the Artwork and love the article overall. Keep up the great work han !