Mask of the High Priestess

The Mask of the High Priestess of Izuru-Delk’isi is one of the most famed items in the known world. Though worn only during the most sacred of ceremonies and therefore rarely glimpsed by the public at large, the Mask is intrinsically connected with the role of High Priestess. It is the symbol of her power and she would not be fully herself without it.

The Mask has been an element of the rank of High Priestess since its inception. In modern times, the Mask is handed down by the Priestess to her successor, and its design is therefore always preserved. However, before this standardisation (so to speak), it was the custom for the High Priestess, in her last years or months in office, to design and commission (or ideally make herself) a new Mask to be presented at the ceremony of Designation. Below are a few of these Masks, some rather ancient by now. 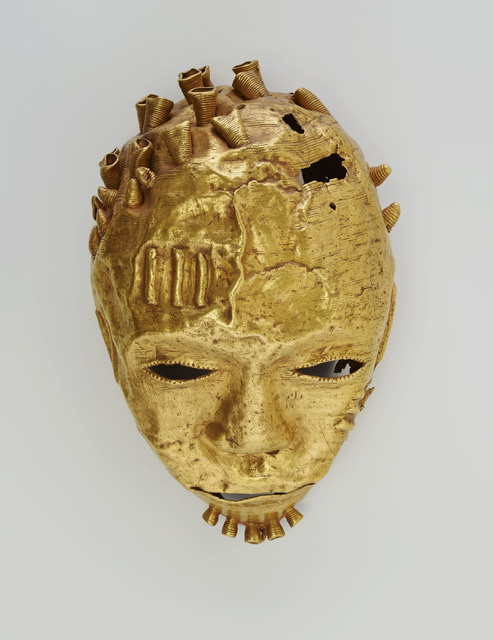 This is a very old version of the Mask. It dates back to 900 AL. and was worn by Samta Lukraya, the third High Priestess, until it was confiscated when she became a member of the Displaced Three. The mask was made by the previous Priestess, Tualinn Kev, out of pure gold. The three bars on the forehead are presumed to represent Lukaya’s status as the third of her rank. 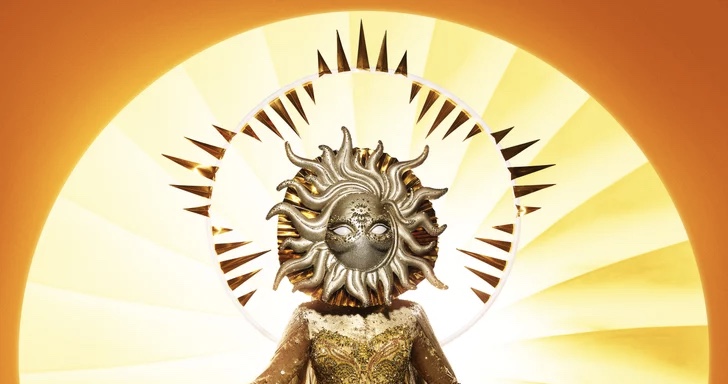 This Mask belonged to Ekrea Domed, the sixth High Priestess, and dates back to around 1040 AL. As one can see, this design is already far more complicated and features heavy sun imagery. It is made from gold and gold-plated wood and was designed by her predecessor- Kruyi Kulefo. Domed wore this iteration of the design until her death in 1074. 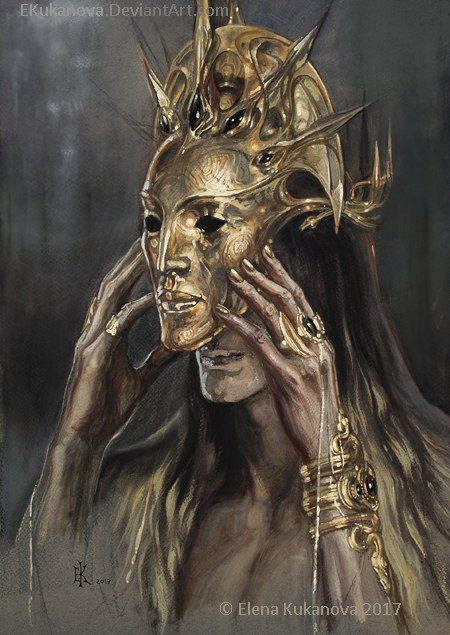 The Temple of Melkor by Elena Kukanova
This version is the design that is still worn today, and has been since 1077 AL. It was made and named the official Mask by Len Ekomah. Her predecessor, Ekrea Domed, had died without designing a new Mask. For this reason, Ekomah wore the previous Mask until her own one could be made. To simplify this process in case a similar death should occur in the future, the design was standardised. It is made out of pure gold, with occasional pieces of wood for support. The design features rays and a disc at the top of the head to emulate the sun, as well as a benevolent but impassive expression.
Item type
Religious / Ritualistic
Dimensions
50cm x 30cm
Raw materials & Components
Every part of the Mask is either made out of or covered in gold- there are pieces of wood used for structural support but these are fully gold-leafed, with a few gems inset into the rays at the top. The gold is in reverence for and imitation of the sun and Anakhorisi, Goddess of the Sun and particularly when directly lit, it gleams and seems to radiate light. The Mask is polished regularly to enhance this radiance and given an extra thorough cleaning before rituals like the ceremony of Designation.

Hello people! This is my first ever challenge entry and I don’t expect to win anything, but if you’ve made it this far I hope you enjoyed my article!

Nice article! Those are very cool-looking masks :D I'm wondering about the wider significance of the masks for the priestess and the ceremonies. Why are the wearing masks, what are they supposed to convey and what are the implications of the priestesses' choices in design? For example, is it important for the mask to have a benign expression? I'm guessing sun imagery are also supposed to be part of every mask – are they serving the Sun god? You mention the sun god in the side bar but you didn't state clearly that he was the one being preyed to during the ceremonies :D

Interesting read! I like the design for these masks and how it evolved. You could still add some more info on why the masks are important for the religion and perhaps add some additional info on said religion. :)

I find it interesting that the mask has changed throughout each priest. It begs the question if there are limitations or rules to the mask. Is there any regulations as to what the mask can be made of, what is or isn't allowed and how elegant it is? I am very curious!

This mask is very interesting. I like how there was variation at the beginning, but this has been left behind for standardization. The reason for standardization makes a lot of sense, and feels very natural.   The different versions of the mask are very nice as well. I do wonder, is there a reason that the previous High Priestess must make it towards the end of her time in office?

Interesting way of changing over time! I like the role and symbolic meaning of the masks.   A sidenote, I only see credits on one of the three images?

I really love the old tradition of creating a new mask for the next person, though I can understand why over time that tradition fell out of favor. Great work in general, and really great work for a first time doing a challenge. Keep writing!