The Clans of Scattered Embers on Wind

Bloodkeepers that live within cold plain regions have the moniker of both Frost Clan and Tundra and the two are often used interchangeably. This group of bloodkeepers are a branch off of this clan, and carry the name of 'Ashen' and Ash Clan. They are exiles from the Tundra, due to their differing behaviours within their shared culture. 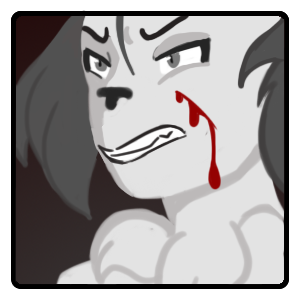 An important rank among bloodkeepers of all Clans, the Esteemed One is a rank in which a single bloodkeeper is viewed as the leader of their respective Clan. This event doesn't occur very often, and the rules rarely change.   Ash Clan usually decide by the darkest fur colour of the group, but if there is a challenger to the position, they will fight to first blood. Combat to first blood is one of the only things in common with those who exiled them.

While it is known that all bloodkeepers are born with white fur, the culture around tinting their pelts varies. Frost Clan members value white and light tinted fur above all else due to their environment and Ash Clan members are bloodkeepers who have consumed so much blood to the point where they have been shunned and even in extreme cases, exiled.

Fur Colour as Related to Religion

The main god of the bloodkeeper pantheon is Silence. A plural bloodkeeper with fur as black as night and hair white as snow. This causes conflict between tundra and ash bloodkeepers, as the prior finds the over-consumption of blood to the point of their fur becoming dark to be sinful; it can be seen to be attempting to reach false godhood. Ash bloodkeepers find the act of darkening their fur to be honouring their god, knowing that while they cannot ascend to godhood, they can mirror Silence in appearance. Their former clanmates claim they are mentally unfit and suffer from delusions of gradeur.

Markings are an important cultural symbol to bloodkeepers, as it allows other tribes to know family relations at a glance. To obtain these markings, bloodkeepers's fur is stained with heavy dye, which is re-applied every year in a celebration of their birth. Each community displays the marking in a different area.

Ash Clan bloodkeepers know that due to their darkening fur, that their markings will be lost rather quickly. Rather than mourn the loss of their family marking and attempt to use other means to have it visible they often embrace their dark fur. They know from looking at one another that even though they are exiled and shunned, that they have a new family.

Ash bloodkeepers are some of the least restrained of their culture with their blood consumption. While they will not gorge all in one sitting, like their peers assume, but there is often a cup of blood instead of a single droplet on birthdays. In the week leading up to their birth celebration, they will consume mouthfuls of blood from all they hunt, as well as a small shot in the evenings.

Remove these ads. Join the Worldbuilders Guild
Cultures and Traditions