Far above the safety of the ground, soaring, reaching, rising to new heights, to new places that so few have ever seen before. Much like the Dragons of the world, they prefer the heights to ground, places difficult to reach except on wing, wind rushing about as one ascends to the homelands of the Avians, a place as elusive and unknown as the people that live there. Here amongst the peaks, the Avians mingle, birds of prey, songbirds, waterfowl, all manner of birdfolk celebrating their life in the air.   Avians are the oldest of the Animal Kingdom races, the animalistic people that are still considered among the civilized races of the world. Their role in the Eldritch War was to control the skies, their leader, the Grand Talon, coordinating aerial attacks in various places around the world most notably along the Crumbling Wall. Avians are known to be an elusive species that are masters of flight that can stay airborne for nearly a day at a time with powerful talons for feet.   Currently, they live in the high mountains of the world where they can be as close as possible to the sky and their native homeland is found on the cliffs near the northern coast of the Southern Continent, this area is known as the Crumbling Wall. You will find these people in areas that seem inhospitable in terms of altitude and perilous, steep avenues of travel because it allows them more freedom of flight in the area. The largest city of the Avian species is a floating structure called the Crystal Nest that is inaccessible to most races but it is known to float high above the Crumbling Wall.

Avians can be found scattered throughout Isekai, but outside of their homeland in the Crumbling Wall, these people are a solitary race, often living amongst other races, but not in groups with their own people. They prefer more rural areas, places that have high peaks and open spaces that allow them to stretch their wings and serve as solitary hunters, depending on the type of Avian. Some types of Avians such as the Anseri and the Passeri may prefer to flock in groups like their animal counterparts.   Culturally, the various types of Avians vary greatly, much like other birds, in the ways they live and socialize. That being said, all types of Avians can be found in the Crumbling Wall, living together even though normally these various types of birds may not share a space or home. In their homeland, it is the love of open spaces and their shared heritage that brings them together under the guidance of the Grand Talon.

Avians are not known to have inherently mystical abilities, their traits are focused on physical aspects and have to do with their bird-like physiology.   This species has many varieties in terms of plumage, coloration, beak, talon, and body shape. These can be overwhelming distinctions but in terms of culture and abilities these seem to be relatively the same with some being stronger, others being lither, some are experts at flying silently but it all breaks down to biology in relation to what birds that they resemble.   The uniting features that span across all variations of Avians are their ability to fly, much faster than most creatures can run. They are capable of wounding most unprotected creatures with their talons and they seem to have no aversion to high altitudes and long drops in which they are able to dive during flight. 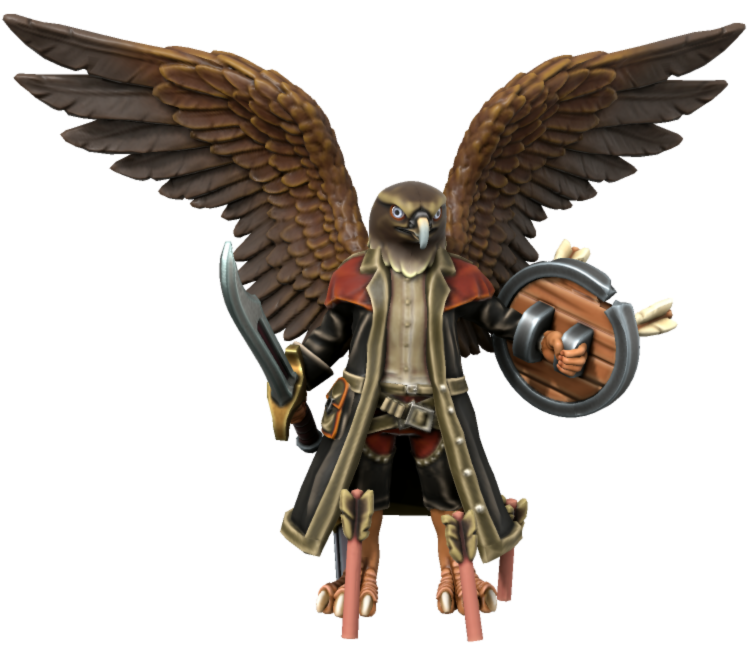 Avian by Model via Heroforge, created by RiverFang
High in the mountains of the world, Avians make their home where they can be close to the skies that call to them. Here, it is easier to spread their wings and travel in the ways their people were meant to, often on wing to perilous heights.
Origin/Ancestry
Animal Kingdom, Avian
Lifespan
30 years
Average Height
5 feet
Related Ethnicities

The Anseri are the most inclined of the Avians to swim and surround themselves with open sky and water. Their villages are often close to the water's edge, whether lake or river, so they can fulfill the need for freedom that all in their race have.

The Passeri are the more musically inclined of the Avians, choosing to live in places that enhance their natural songs. These areas are often home to large numbers of these songbirds, creating choirs and ensembles that would rival those of the Bards.

The dark feathers of the Ravenfolk and the small birds that they resemble are often seen as a bad omen, but the Ravenfolk have made this their success. Rarely do they have permanent homes, wandering wherever the stench of death draws them.

Strigea are the night owls of the Avians choosing to live their lives by the light of the moon. They are dangerous hunters, known for acute senses and pin-point accuracy in their hunts.

Struthio are some of the most varied of the Avians but are united by one common feature, their long, thin legs. With wings tucked close to their backs, the Struthio much prefer to run across the distances instead of fly like their brethren.

The Tridae are the strongest and most well-known of the Avians. Their wings and strengths in the air and as Mapmakers demands respect which they frequently receive. These people love the sky and the freedom it brings, the thrill of tracking.

The Trocha are the true speedsters of the Avians, but their endurance is far lacking compared to others of their race. Over short distances, few creatures in Isekai can keep up, but the Tridae surpass them in size and endurance.

Ooh, the Crumbling Wall sounds interesting!   Are there any other cultures of Aarakocra? You mention they live currently in one place, but is that all of them?   Secondly, how does their second law shape their perception of ownership and how does that clash with visitors, allies and others? :)   Great work as usual!