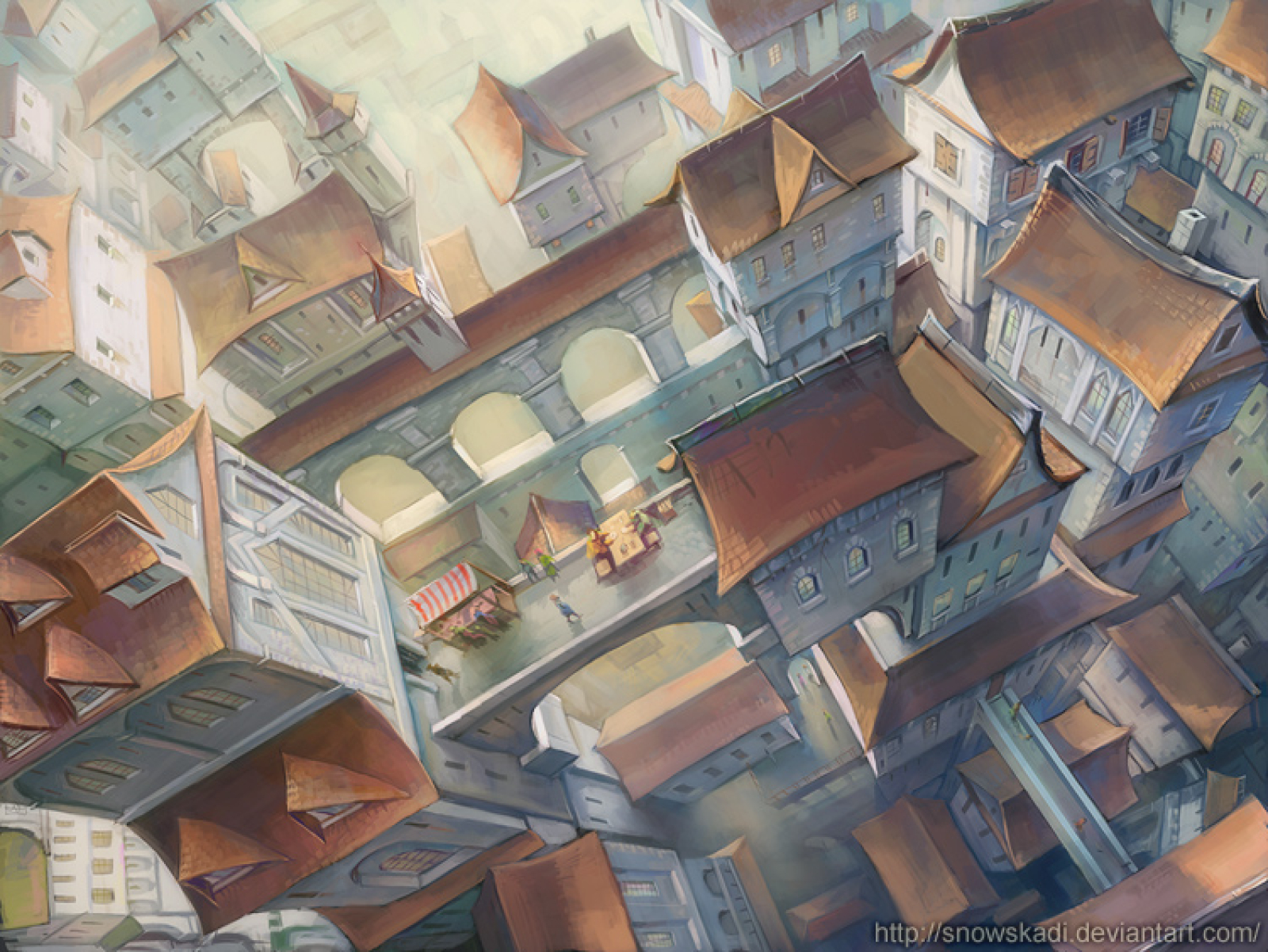 Once a year, during the city-wide spring festival, citizens may participate in the Great Tower Race, a day long test of endurance, teamwork, and cunning.

The race was born in a tavern bet. Two students from the Winter Academy were drinking heavily one evening. When Adrienelle boasted that she knew the city better than anyone, her class rival Sonrei immediately countered that he easily knew far more than she. The pair quarreled for some time until finally a deal was struck to prove the truth: they would meet at dawn on the beach and race to the Office of Construction Management overlook on the far side of the city, each choosing what they considered the quickest path. The race became the stuff of local legend. Some thirty years later, a group of students organized a memorial race of sorts that quickly grew into a yearly ritual and then spread in popularity.

The city handles the race preparation, placing the flags and deciding on the exact start and end points. Businesses often try to bribe race officials to have a flag placed on or near their buildings for the increased foot traffic and notoriety. Success rates vary, depending on the year and the official in question.   The location of the flags is a closely guarded secret, as is the method of placement. They may be on the top of a tower, the underside of a walkway, or simply hanging from a shop sign. They are almost always on the outside of structures. The number of flags varies based on the number of teams.   At dawn on race day, runners gather at the edge of Allulina Bay. A map of the city with flags' general locations highlighted (produced via illusion) is shown for two minutes. Memory is a key skill. Teams then have five minutes to confer before the Bay Bell is rung and the race begins. During this time, many spectators head out for flag locations to find good observation points.   Runners will head for low hanging fruit while their coordinators check out the locations they anticipate will be more difficult and pinpoint the exact location of the flag. The job of the backers at this point depends on the nature of the team. Some seek to make it easier for their runner to get to the flags; others would rather set (nonlethal) traps for their opponents. Creativity is a prized trait for these team members.   The race ranges all over the city, up and down the towers of Samavra. Teams must reach the goal before sundown with as many flags as they can.

Many teams join the race just for fun, but these are rarely real challengers for the win. Serious competitors train throughout the year in teams. They may be in it to prove themselves or for the thrill. (It's a rare year that has no serious injuries -- usually from falls -- and people do sometimes die.)   Most of the city keeps its windows open so they can listen for the crowds and maybe catch a glimpse of the teams in action -- or even better, see two or more teams converge on a flag. More dedicated fans are in those crowds, following the action in groups or even trying to anticipate. There's a thriving market for advance tips on where the flags will be, though most are utter lies.   Non-participants who tamper with the flags are subject to rather egregious fines, as well as voiding that particular flag for purposes of scoring. Samavra takes its race seriously.

The time of the Spring Festivals fluctuates somewhat as they are set to coincide with the first Bayberry blossoms. The Tower Race is traditionally on the third day.
NB: In theory this is so. In practice, however, some are culturally discouraged from participating. Borrowers' shapeshifting ability is seen as a built-in cheat, and not even the most heartfelt oath to remain in humanoid form keeps other competitors from grumbling. Borrowers who wish to participate usually do so as coordinators rather than runners, which gets them a bit less side-eye. Also, foreigners are technically allowed to compete, but are often made to feel as though they should not be there, both by their fellow competitors and by the race registrars.

There may be any number of teams. Registration is open to all.NB

Answering: "What is the most popular sport in your world? Explain the rules."
Visit kitsuki's Competition Page Check all other answers to this prompt Competition Homepage

Yeah, I don't sport. So my apologies for any strangeness here; I've never really paid attention to how they work. I realized halfway through planning that I was kind of basing this off Death Race 2000, only with 100% less vehicular crotch-stabbing.   As an aside, I am always looking for things that rogues could be that aren't straight-up illegal. I like the idea of Tower Race coordinator as a rogue background.

Very important question: Who won the first race? :D And is there a trophy?

Super secret confession: I sat there staring at my screen for about ten minutes trying to decide who won and finally said to hell with it and moved on. XD If I had a following of any size, I'd put it up for a vote.   And there's totally a trophy, but I might have it like the sumo tournaments, where you get to keep it until the next race. Maybe the teammates names get added to a wall?

That leaves room for all kind of in-between tournament shenanigans with the trophy :D I like it!