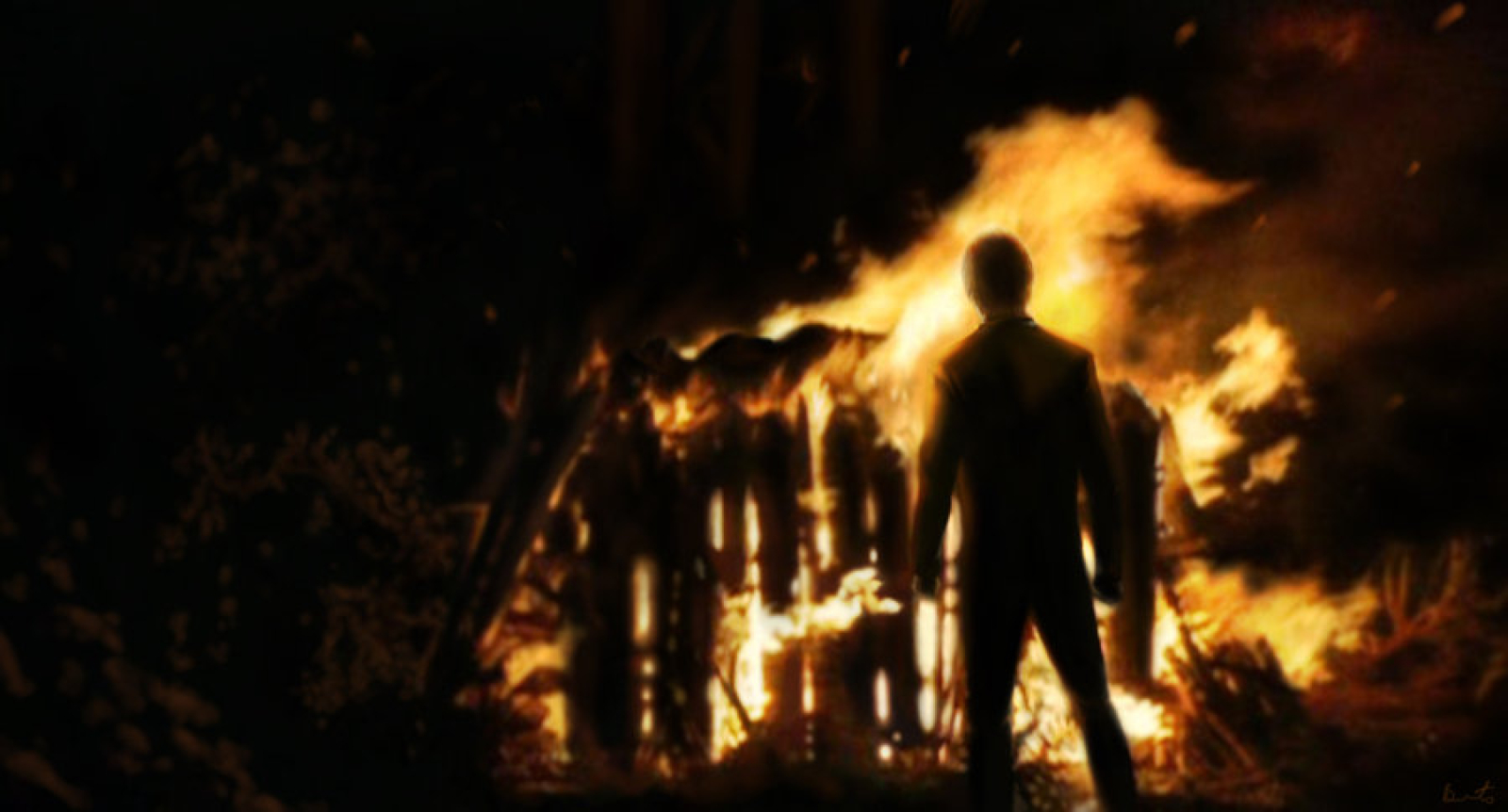 The Rushil people have observed their practice of burning the dead for as long as they have lived in the Misty Wetlands.   It began when the first settlers to arrive in the area realized that bodies and coffins buried in the marsh would always resurface. At first, some thought to weigh the bodies or coffins down with rocks but, fearing that the stones would trap the souls of the deceased and prevent them from watching over their descendants brought further talk about this to an end. With that idea discarded, the people then turned to the idea of sending the deceased into the afterlife using a pyre and then spreading the ashes of the newly dead on the land used for growing crops. This was to both enrich the soil but, also give the spirit a marker they could use to more easily find their descendants.

When a person is on their deathbed, the funeral process begins by having every single member of their family come to their room, one at a time, and light a candle or a stick on incense and place them around the dying person's bed. After they've set the item down, the family member will approach the bed, speak their last words with the dying person and the two will rub three lines of oil on each other's faces; one horizontal line on each cheek and a vertical one on the forehead. This exchanging of oil is to signify the two people are essential to one another and the lines are thought to stay on their faces after death so when their spirits meet in the afterworld they can recognize one another. When everyone has spoken to and exchanged oil with the person in the twilight of their life, they will all enter the room and surround the ring of candles and incense and sing songs throughout the night, even after their loved one has passed until the last of the candles has burnt out. If the person has died suddenly or in an accident, the family members will still rub oil on to their faces but will skip everything else.   The family will then carry the deceased out of their house and through the streets, yelling and crying out in pain and sorrow. Their procession will be joined by anyone who was a friend of the deceased who will add their voices to the wordless cries of grief until the group reaches the center of the town. There they will set the body down on the permanent stone altar and every member of the procession will leave for the marsh with axes and chop down three trees: a birch, an oak, and a willow. The birch is believed by the Rushil people to represent new beginnings, purification, and protection while the oak is believed to represent strength, fertility, and health and finally the Willow is supposed to represent love, friendship, and peace. The chopped oak will then be used to make up the bottom of the pyre, in the center, where the body will be placed, the chopped willow will be placed and finally making up the top of the pyre will be the chopped pieces of birch. Once the pyre is built, the person's favorite flower or plant will be placed over every piece of wood until the whole thing is covered.   The mourners will then take torches and one at a time will touch their torch to the bottom of the pyre. The remaining spouse, if they are still alive, will be the first one to do so, followed by the deceased's parents and children then their siblings and nieces and nephews then their friends and cousins until everyone's torch is touching the oak logs.   When the willow logs start to catch fire, the mourners will step away and once again start singing as their loved one's spirit is freed from its body.   When the fire has fully consumed the pyre and burnt itself out the people will stop singing and after waiting for it to cool down a little, will gather up the ashes in their hands. The ash will then be taken to the family's plot of land where they will be spread on the ground.   If for some reason, the body of a loved one was unable to be retrieved because of war or an accident at sea, the family would still perform the ritual minus the parts that involve touching the body. It is believed that so long as a person has exchanged oil markings with at least some family members, such as grandparents, older relatives, or sick family members who die young, that those they shared the oil with, will lead their lost person's family back home in the spirit world.

The family members, including their surviving spouse, living parents, living grandparents siblings, children, nieces, nephews, cousins, and anyone else related by blood, and friends of the deceased.

They are observed when a person is dead or dying. The length of the observance depends on how long a person is on their death bed or how long it takes the wood to burn. If there is rain or a storm, the burning of the pyre maybe put on hold until the storm has passed.

What the Rushil do for their dead made me teary eyed. That they start the ritual by singing to their loved one while they die to them crying as they bring them down the streets, then how they each partake in burring the body, it's such a sorrow filled event. That being said, what if they had a loved one whose body was unrecoverable?

They would still perform the rite minus the parts where they physically interact with the body. There wouldn't be any fear of their loved one not finding them as they had likely drawn oil on the faces of their grandparents and any loved one who had died and that loved one's spirit would lead them to everyone else in the spirit world.

What a detailed and long ritual with so much symbolism. What happens if the deceased's spirit is not freed from his body? Is this rite altered, for example, in times of war where there are many dead to burn?

The Rushil people don't fight many wars as their opponents would have to brave miles upon miles of swamplands to reach them. But the few instances of warfare they have had, they would send small groups out at night who would recover the bodies of the fallen using their knowledge of the swamp to get around undetected. For those who they were unable to recover, they would, as I mentioned above, perform the same ritual minus the parts that involved physical interaction with the deceased.

What happens if the Rushil that dies is the last remaining person of his or her family ?. Who will carry out the funeral rite for them?. Overall I did enjoy this article! keep up the good work

Then their closest friends will take over the duties the family was supposed to do.