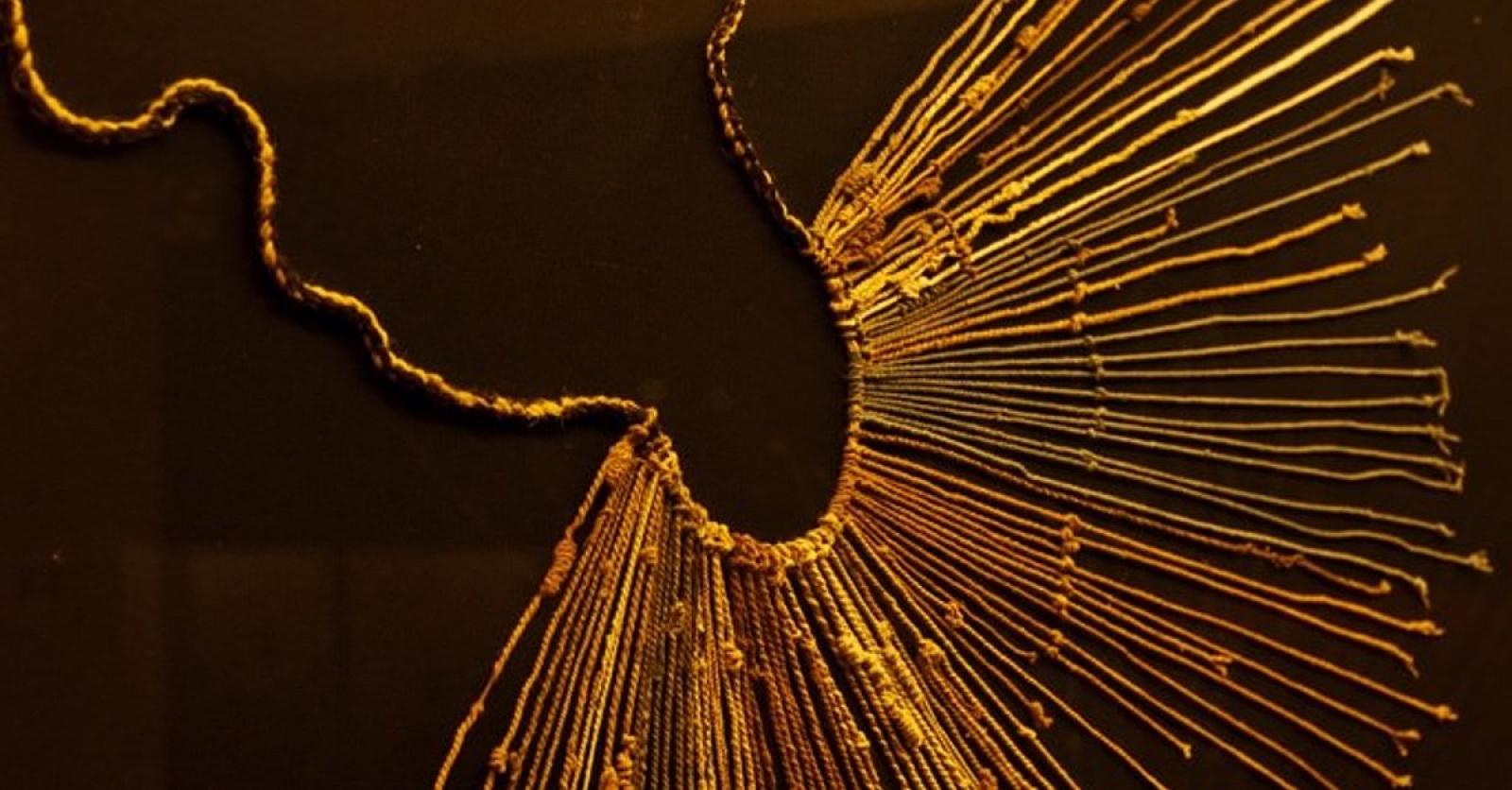 There is no universally accepted combination of colors or patterns across the suyus. Colours within a cord series carry exclusive meaning to the person who made that specific khipu.   Almost all colours employed by quipumakers further away from the imperial center are of natural fiber hues. Dye colours of greenish-blue or senf yellow are cheaply made and sent to territories where they are remixed and diluted to stretch their use.

Minor but significant variations of shade within one colour indicate different but still similar concepts. For example, violet for ‘rebellion’ as oppose to purple for ‘war’.   Likewise, at the state level, certain colour choices became standardized to express all the emotions as the human voice. Depending on the shade scale of red to blue; where words tied in red are read quickly and blue slowly.

A cord that acts as the spine, where knottable pendant cords are fixed by half-hitches.   It is generally the thickest cord in the cord series expressed in the horizontal direction and number values increase by a power of ten the closer to they are.

An umbrella term for the pendants, subsidiaries and sub-subsidiaries that hang over their respective previous cord.

Any given cord structure may be part of a larger cord structure of the same design, or may conversely bear subordinate members of likewise design. A pendant bears subsidiaries which can bear bear sub-subsidiaries of their own up to 12 levels deep.

This is where main cords are attached directly to each other in a horizontal manner. Conjointness is congruent to relations among peers like allied polities, neighboring villages or sibling-clans. It is not meant imply equality as each segment is seriated to imply rank so can thus be interchangeable.   In practice, it is hard to tell which junctures imply simple combination and which imply hierarchical stances.

Yupanas are table calculators with compartments that correlate with khipu knots for keeping records of goods and stocks, of the census, of the amounts of tribute owed to the government and labour according to mita.

Quipus are made of fibers, either spun and plied thread such as wool or hair from alpaca, llama, guanaco or vicuña. Though, they are also commonly made of cotton of other plant fibers.

The knotted strings of quipus are often expressed as an "elaborate system of knotted cords, dyed in various colors, the significance of which was known to the magistrates".

Fading colours, natural or dyed, cannot be reversed, and may indicate further damage to the fibers. Colors can darken if attacked by dust or by certain dyes or stains over time.

A cord might well be coded to stand for different sounds or various coloured cords that indicate that colour or some other nonverbal entity.

In semi-rare cases, the ends of main cords are tied together in a close loop to show the information is self-contained.

A bent cord is the informal name for a main cord bent into a ‘U’ and lashed to form a two-tailed armature for attaching many smaller cords.

Pendants are fixed by half-hitches and are frequently grouped in distinct sets of a number of repeated coloured cords, with spaces between them. Alternatively, cords can be bi-coloured in bands (whether natural or dyed), where two patterns reflect complementary issues. Techniques to create multicolored pendants include:

Subsidiary structures, several hierarchical layers deep, act to underline the parent cord.   They are typically brighter than their parent but still carry the same or similar design, otherwise.

Dangle cords are attached to the end of the main cord and indicate where to start reading the khipu and as extra endings to tie conjointable cords.

Small non-cord objects such as bits of wood, tufts of wool, tags of rawhide, bicoloured pompoms and figurines shaped into individual animals and their condition to simplify the khipu's meaning for less educated handlers. 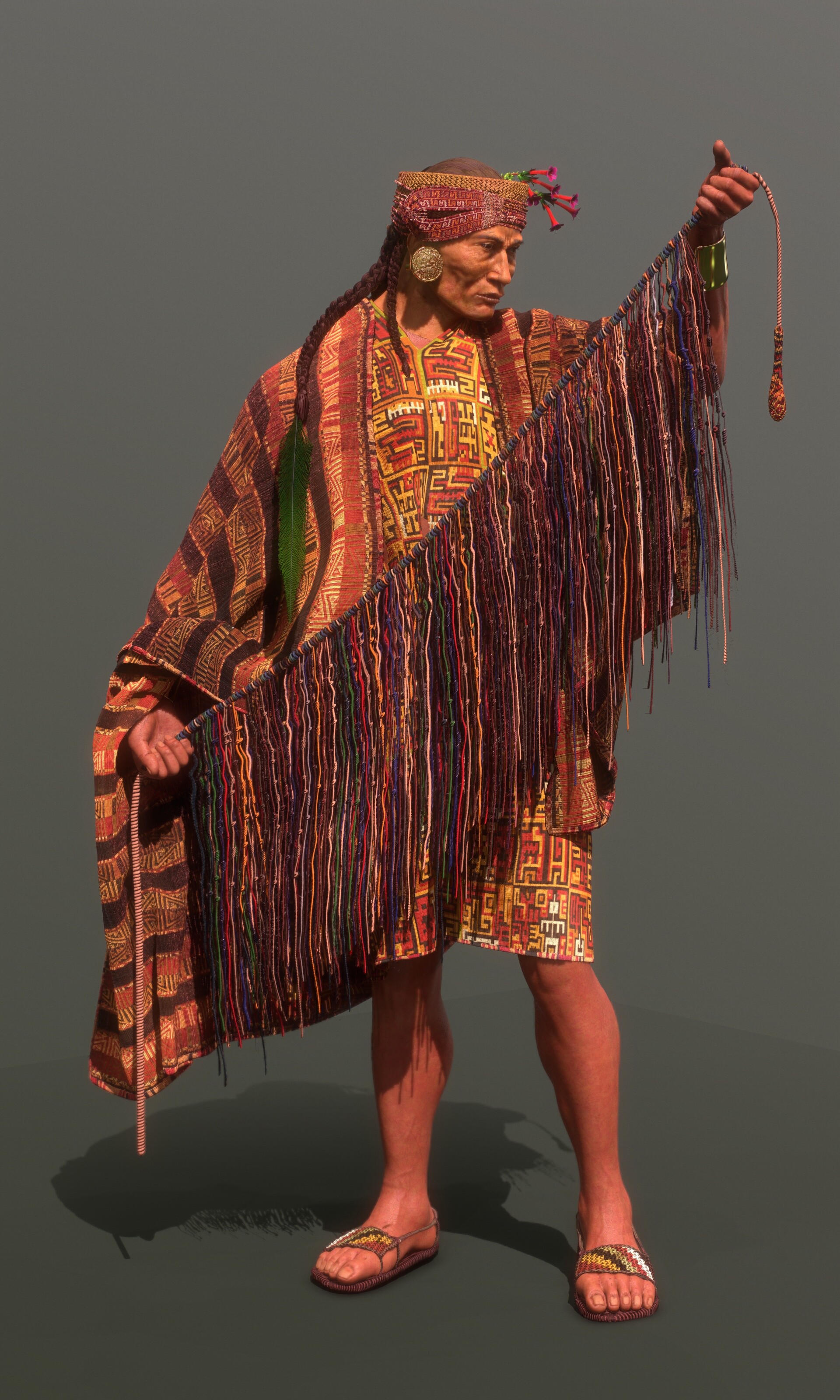