The Canvas Valley is a pass through the Spring Rim Mountains, blanketed by a wide variety of wildflowers. The Spring Kingdom is very proud of the botanical diversity in this slice through the Rim and retribution towards those who litter, burn, or otherwise harm this area is swift and harsh.   The Canvas Valley is the only true valley in the mountain range and is thus the easiest way to pass in and out of the Spring Kingdom. Travelers coming via land from Autumn and Winter will often skirt around the range in order to enter the kingdom through this much safer entrance, even if it is much further out of the way.

The Canvas Valley is home to a number of species that are difficult to find elsewhere. As it is a rather open space, there are few shadows for large predators to stalk, making it an ideal habitat for small mammals. Rodents in particular are abundant here, including the daisy rabbit (which is in fact not a rabbit, but children are not known for their taxonomical correctness when naming wildlife).   Of course, the botanical makeup of the Valley limits the kinds of fauna that make their homes there. The steep sides of the valley are dotted with a variety of scrubby bushes and even a few small species of trees. However, they are few and far between, so the birds in the area are mostly ground-dwelling and even the most adventurous Rim goats tend to stay away. 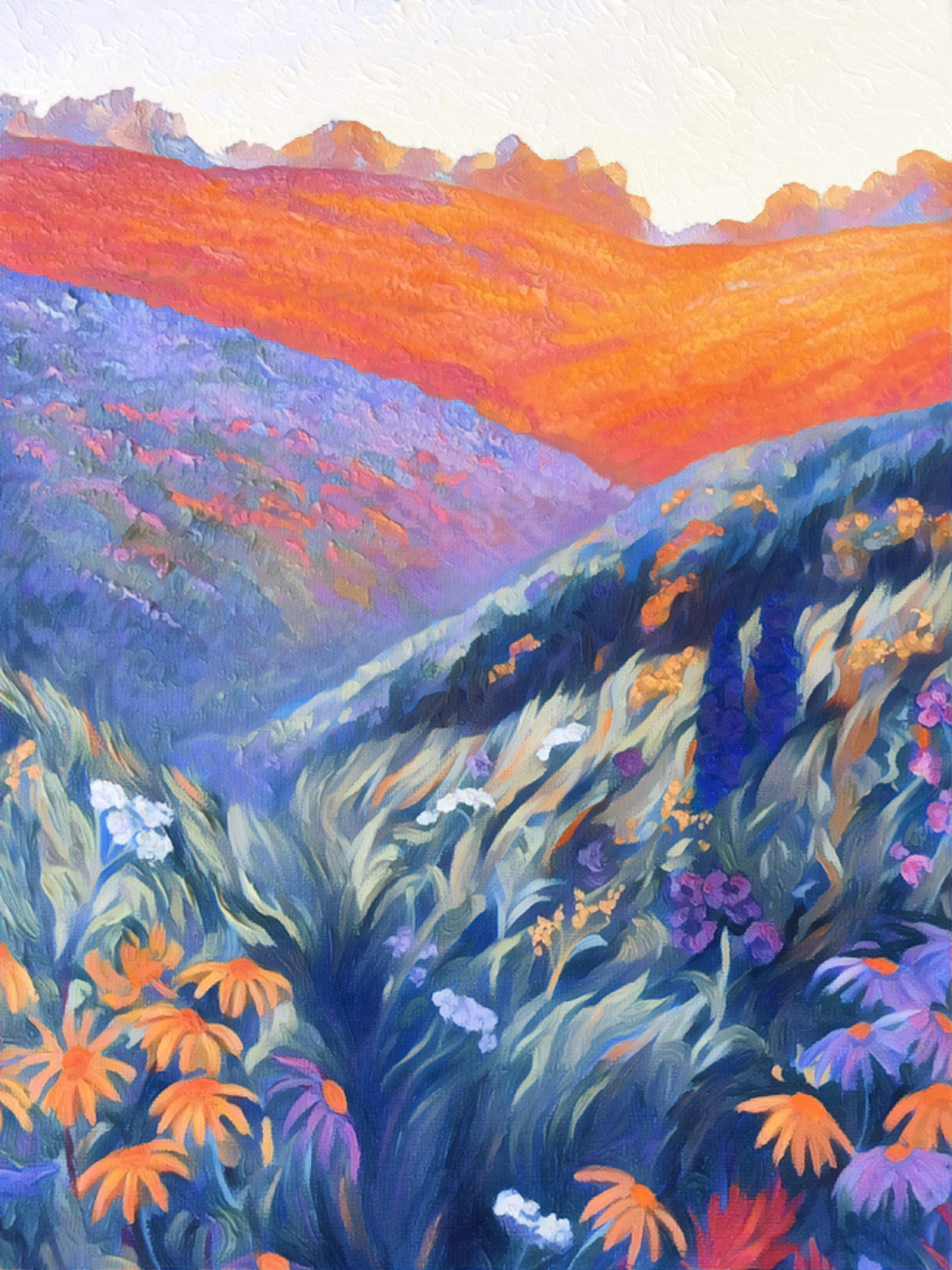 by Anna Widmer
And of course, one cannot forget the hundreds of varieties of flowers that fill the floor of the valley. The thick grasses and the swaying blooms that peek out of them give the Valley its name. Many of the flowers are just as rare as the creatures that shelter beneath them. Flowers such as the Lady's Paintbrush, Whiskerbloom, Lace Anemone, and Sun Bells. Several species have medical or magical uses, such as Liefwort (which can be used in healing potions) and Saphia Tails (which are a necessary component of a very specific spell).

As such a beautiful natural space, the Spring Kingdom is naturally quite protective of the Canvas Valley. Add in that it is populated by such rare and sometimes sought after species, and their protectiveness is even more understandable. But on top of that, the Valley being a popular travel route makes it that much harder to protect. The combination of a very protective Kingdom and a hard-to-protect, wide open natural area has led to the creation of the Valleyguard.   The Valleyguard has protected the Canvas Valley for over a century. They make a point of being amicable and helpful to travelers, as any proper Springer should. But cross them, or leave a piece of trash behind, and they will cut you...

Perhaps the most notable feature of the Canvas Valley is not actually in the Valley, but rather above it. Suspended by a combination of magic and engineering, Allspace hangs between the two peaks on either side of the Canvas Valley. The acolytes that tend to the Allspace are very careful to ensure that no detritus from the building ends up in the Valley below. As such, littering from the Allspace receives a much harsher punishment than other Valley infringements.   The steps carved into the southern and northern walls of the Valley are carefully placed exactly halfway through the Valley and switch back and forth up the steep inclines to make it a little less punishing a journey. However, few choose to take the stairs up to the important temple/meeting place, choosing instead to take advantage of the acolytes posted at the bottom of each staircase, waiting to magically transport visitors to the building high above.
Type
Geographic Feature