Hyego was a kingdom that existed on the Shilo Peninsula during the Third Age, approximately 3,000 years ago. Before it, the Shilo people lived in unincorporated villages scattered throughout the region. There were some local rulers, who ruled through strength of arms, and frequently warred with each other.

The region was plagued by dire wolves, especially after Miwa people to the west tried to drive the wolves into the peninsula to protect themselves. Many small villages were devastated by the wolves, with the populace torn to shreds. With this crisis on their hands, the local rulers attempted to unite to work together, but they could not agree who should be the leader and only caused more feuding.

Tired of their quarrelling while his people suffered, a lord from one of the smallest regions set out to solve the crisis. He was a powerful spirit shifter and used his talents to quell the ferocity of dire wolves. According to Shilo tradition, he was the very first shifter, although it's likely that some form of the tradition existed in the region since prehistory. This lord, Ewa, claimed to have been instructed by the Great Sage, a holy women who came from the sky to give wisdom to humanity.

Ewa used shifting to calm the wolves, making them docile long enough for his soldiers to kill them. After clearing an area of wolves, he left troops behind as defense and gained more troops from thankful villagers. By the time the more powerful warlords realized what was happening, half the peninsula already looked to him as their saviour. There was a short war between him and the previously most powerful lord, but Ewa had enough allies by then to defeat him and secure his position as ruler of the newly formed Hyego Kingdom. 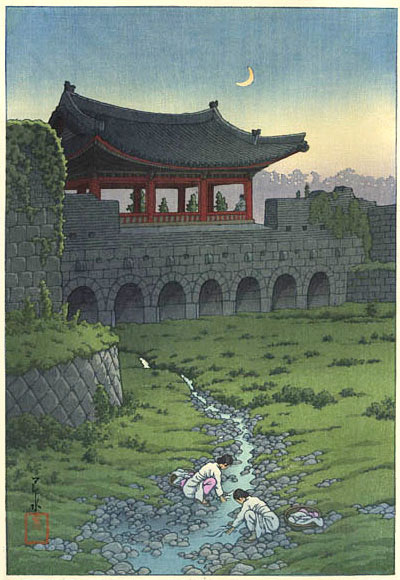 Hwasa Gate by Kawase Hasui
Ewa was beloved by the people. He was wise and just, and spread the knowledge of shifting throughout the region. When he wasn't busy with affairs of state, he spend his time in hospitals, treating injuries with shfiting and teaching nurses how to do the same. He allegedly lived to over a hundred years old by sapping spirit from the grass.

Subsequent rulers were... not as beloved. One of Ewa's great faults when establishing the kingdom was a failure to include checks on a ruler's power. Other powerful figures at the time overlooked this problem, because Ewa remained just throughout his rule and wielded absolute power for good. His heir followed his father's example, with only a few slight abuses of power.

Over time, Ewa's descendants became increasingly corrupt. The family line was all powerful with shifting, and many rulers became intoxicated by their power to manipulate lives both spiritually and legally. Over the ensuing centuries, Hyego went from a prosperous kingdom with a happy populace to a corrupt tyranny full of orchestrated famine and frequent abuse. It came to a head with the final queen of Hyego, Kaoreng.

On the day of her enthronement, she ordered twenty children to be delivered to her chambers. That evening, she used shifting to feed on the children's confusion, fear, and youthful energy as a glutton consumes a feast. This was only the first evil of a long reign filled with grief and wickedness.


Fall of the Ewa Dynasty

The other thing that happened on the day of Kaoreng's enthronement was the arrive of the Great Sage. The elderly woman, the same mystical teacher who had guided Ewa long ago, appeared at the palace to deliver to a prophecy. The prophecy spoke of the birth of a hero, who would be blessed with power the queen could never understand. Under this child's guidance, the people would rise up and the Hyego dynasty would fall.

Kaoreng made finding and eliminating this child her most important priority. The prophesied child was born later that year, and the rebellious commoners who worked to protect it from Kaoreng went on to become the leaders of a revolution. Over the next fifteen years, unrest grew throughout the kingdom. With the promise of the child defeating the queen in his fifteenth year, they had the optimism needed to fight back against the queen's power. Slowly, regions around the fringe of the kingdom began to break away.

By the time the prophesied child reached his fifteenth year, the kingdom was in such turmoil that all the pieces were in order for him to lead the final strike against Kaoreng. She was killed, and the child took the throne to restore the kingdom to Ewa's original vision.


End of an Era

After the defeat of Kaoreng, Hyego endured for another three hundred years. It had its good kings and bad kings, but with no shifters on the throne and increased power given to the people to keep checks on a monarch's power, it never reached the depths of the Ewa dynasty. It ultimately fell to an invasion from Kiyowara.
Type
Geopolitical, Kingdom
Demonym
Hyegoan
Location
Shilo Peninsula
Notable Members
Related Ethnicities
The Third Age