Panting, sore, and exhausted, the man stopped to sit on a rock. He couldn't hear anything behind him; he must have finally lost them. Finally, he had time to examine the burning pain on his forearm. In the jungle's faint twilight, he couldn't see any obvious injury from where the creature had spat at him, and the burning sensation from earlier had already disappeared.

Actually... all sensation had disappeared. He experimentally poked the arm and had the oddest feeling of watching his own arm be touched without feeling anything. His fingers tingled and were an effort to even wiggle, and the numbness had already reached past his elbow, despite the sticky spit only slinging to his forearm.

If only he had water to wash his arm! He'd thought the awful smell of the creature's saliva was bad enough. Spitting on his good hand, he did his best to scrub the sticky substance away but found it clung to him like tree sap.

A rustle in the bushes caught his attention. His heart throbbed in his throat as he squinted into the darkness. Could it have been just a rodent? Then, a pair of eyes blinked out of the shadows, gleaming white. A second pair appeared a moment later, followed by a third that rose out of the bushes on a long neck. The bird cocked its head and chirped curiously. It would have looked like a playful vorompatra chick, if not for the old blood stained on its hooked beak.

He grabbed a fist-sized rock and hurled it at the bushes. "Get back!" The birds scattered with a flutter of useless wings and he forced his aching legs to get up. Already, the eyes were popping up again, a little farther back this time. He forced himself to start moving again, because gods knew he couldn't sleep out here lest they devour him in his sleep.

But his exhaustion worried him. Surely the strain of breathing wasn't just from running, and surely his heart should be beating faster from how anxious he was. If the poison in the spit was making his arm stop moving, what would happen when it finished seeping up his arm and into his chest? His village was still an hour away, and already he could hear the rustle of bushes that said his pursuers were still creeping after him.

The beasts were patient. They could stalk him through the jungle for hours, never close enough for him to fight back, but never far enough to lose his trail. Eventually, either from their poison reaching his heart or sheer exhaustion, he would have no choice but to collapse to the ground. Then, and only then, would they converge on him.

The Most Feared Predators of the Jungle

The jungles of central Kaabara are home to a host of wild animals. Although due caution is given to leopards or crocodogs, both humans and animals alike steer clear from a seemingly pleasant bird trill.

At four feet tall at the back, duskstalkers are not especially big nor heavy. They might even appear cute when viewing them at leisure. They aren't so cute when they're hunting.

Duskstalkers are pack animals, but they scatter when setting out from the nesting ground at twilight. The birds lurk in the bushes along game trails, their mottled brown and grey feathers helping to blend them into the shadows. You probably wouldn't even notice one lying in wait along the trail until the glob of saliva strikes your exposed skin.

As soon as the saliva hits skin, it stars to tingle and burn. The oily saliva contains a neurotoxin that seeps through the skin and reaches the blood vessels via osmosis. But the bird won't attack - not yet. As soon as it spits, the duskstalker retreats into the bush while letting out a loud, carrying hoot. That hoot tells its flock that prey has been marked and the hunt is on.

There's no point trying to kill the one that spat on you; the rest of the flock is already on its way. The only thing to do is run and pray. The slow-spreading toxin will slowly creep toward the heart, and depending on where it landed, that could take an hour or more. As the poison spreads, numbness and paralysis go with it. Once it reaches the chest, the heart and lungs begin to shut down.

As the poison spreads, the birds stalk their prey. Seven or eight birds run along behind their prey, careful to keep their distance. They never worry about their prey getting away from them, because the saliva has a strong, pungent odour that they can smell from over a mile away. If you stop to catch your breath, the birds pop up and cock their heads, checking if the poison has finished its job yet. They'll creep forward, darting in to take a nibble and scattering if you make noise or movement.

To be struck by duskstalker poison is almost always a death sentence. From the moment it hits you, the birds will chase the distinctive odour that no known formula can fully wash off. The instinct is almost always to run, because there have been rare cases of victims who reached their village before they collapsed from the poison and had the affected limb amputated and thrown in the river - the only way to get them off your trail.

It's smarter to walk. Running makes your heart pump faster and speeds the poison along. For the best chance of survival, you must walk calmly and slowly through the jungle. Try not to panic at the sight of shining white eyes just out of sight behind you. Rest if you need, because the creeping poison will sooner or later sap your strength, but take caution. With every rest, the birds creep closer and the poison spreads farther. You just might stop to rest and only to find you lack the strength to get up again, and that is when the birds will swarm. If you're very lucky, you'll be dead before they start to peel away skin with their hooked beaks.

This is the last testament from Uleng of Mbaro village. I pray that this record is found and taken to my wife. I have been marked with duskstalker poison. Already it burns through my calf and I doubt I can run with any speed. I can feel their eyes boring into my back, but I can't bring myself to look.

It... seems odd to sit here and know I am going to die tonight. I feel fine, physically, and the creatures are not attacking. It is surreal to think I cannot simply walk home and that a simple glob of saliva on my calf amounts to a mortal wound. I refuse to run. The fear and exhaustion of fruitlessly trying to outrun beasts that can track you so thoroughly seems a needless torture. Furthermore, even if I made it back to Mbaro, I fear I would lead the creatures to my neighbours and condemn them to the same fate.

For these reasons, I have decided to kill myself with my hunting knife. Whoever finds this, please deliver it, and the attached letter for my wife, to Mbaro.
— A villager from northern Maloa

About 50% of their skull is taken up by their beak, which is round and hooked. On the top of their head, just above the beak, is a pronounced nasal cavity. The entire head is feathered, but the feathers become longer at the back to form a low crest.

Their long necks lead to a bulky body. They have wings, but they are small and vestigial and usually held close to the body. Their feathery body is sleek, with long, smooth feathers. 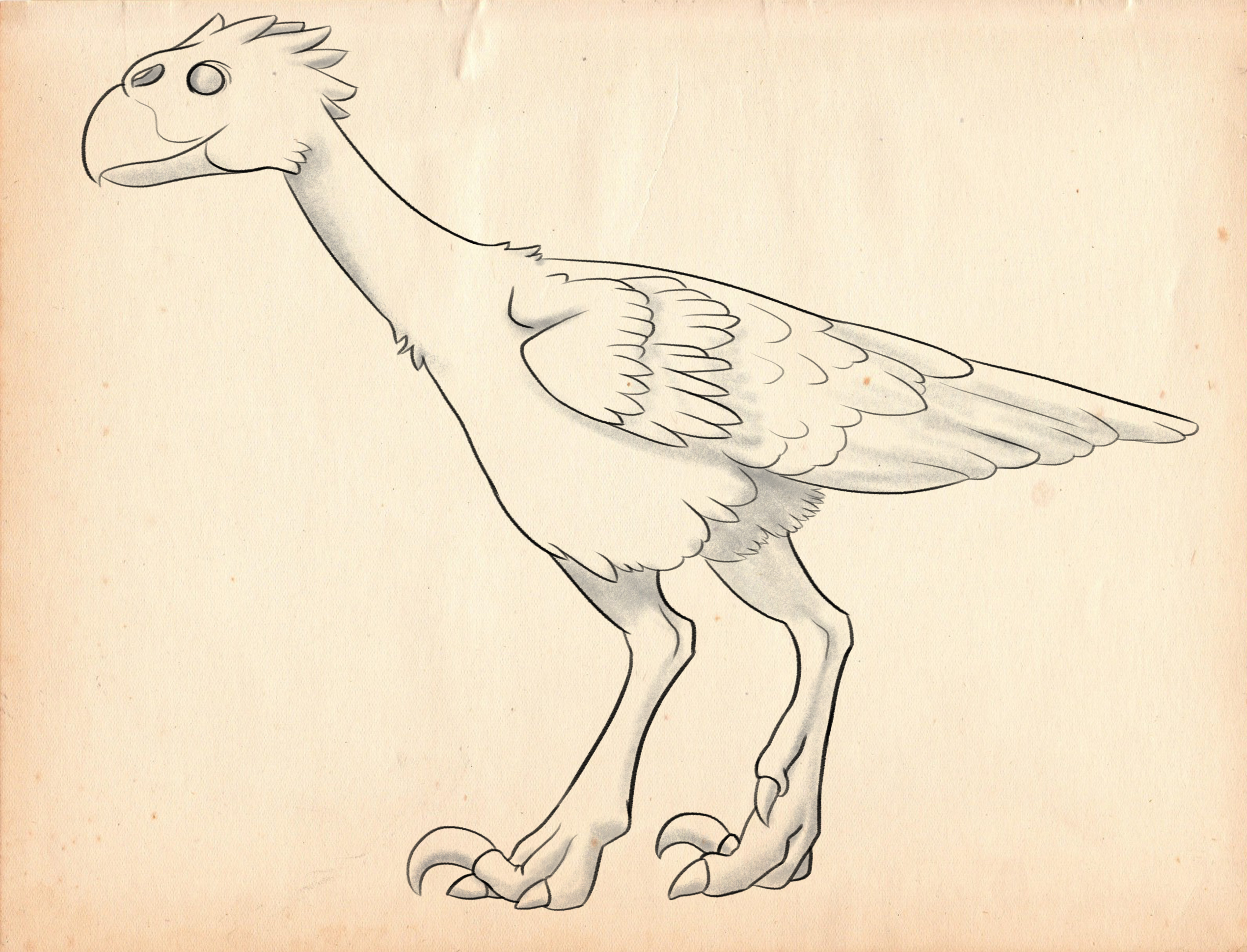 Their legs are scaled and powerful. Each leg has four toes, each with a large talon. The middle toe on each leg has an especially pronounced talon that curves like a sickle and is their primary weapon.

In early spring, male duskstalkers are on the prowl for an engagement gift for a would-be mate. They initially hunt as per the norm, lurking the shadows to ambush prey with a sudden glob of toxic spit. Once the prey is startled and begins to run, they begin the pursuit.

Unlike normal hunting, they remain quiet as they hunt rather than summoning the flock to join them. Once they've finally worn the prey down and it collapses, unable to continue running, the male runs forward and hoots for a female. These hoots can be heard up to half a mile away, and are a persistent part of the night's backdrop throughout the spring.

When a female answers the call, the male presenst his crippled prey, which he has not killed yet. It might be anything from a rodent to a deer or, in especially persistent and confident birds, young deinotherium. If the female is impressed with his gift, she will use her toe claw to kill it. The two birds will feast together before copulating.

Flocks of duskstalkers nest in large groups. They tend to nest in areas of tall grass or ferns, which are typically strewn with old bones and carcasses picked clean and left around the nests. The nests are made by digging a circular, shallow hole and then lining it with grasses and fallen leaves. After laying a clutch of two to three eggs, the adults spot all around the nest. Their spit carries a strong scent feared by all creatures of the jungle, and serves to ward off would-be egg thieves while the parents are off hunting.

The eggs gestate for about 6 weeks.

They live in warm, tropical forests. Their hunting method requires heavy foliage that allows them to hide and lurk in bushes and ferns. As a crepuscular species, they thrive at twilight and dawn, although once they start a hunt, they will continue the pursuit into the day or night.

They are very bright animals, although could not be said to be sapient. Their intelligence is best compared to corvids. They are capable of organizing communal hunts and distributing meat fairly among members of the flock.

Despite their reasonably high intelligence, they are still animals. Cutting off a limb to escape them is an effective tactic, as they track their prey by the scent of their spit. When they find the severed hand, for example, it will not occur to them to follow drops of blood or even the scent of blood to find their intended prey.

The Duskstalker's most notable sensory trait is their sense of smell. They have a large nasal cavity along with a sizable portion of their brain dedicated to interpreting olfactory data. They can smell blood from over a mile away and primarily use scent to track their prey.

Along with smell, their eyesight is adapted to low-light conditions. Their large, bulbous eyes are equipped with tapetum lucidum, which helps them see while they hunt at dusk and early nightfall. It's also responsible for the eerie glow peeking out from bushes they are so known for.

Geographic Distribution Throughout the jungles of central Kaabara
Birds