A Battle of the Third Crusade fought on 7 September 1191 outside the city of Arsuf, on the Levant  coast between Acre and Jaffa.

Following the Siege of Acre, King Richard knew he had to take Jaffa before attempting to capture Jerusalem. he began a slow march down the coast in late August 1191, leaving Caeserea on September 1. Aware of the problems water shortage had caused Crusader forces at the Battle of Hattin, he marched only in the early morning, avoiding the heat of the day, stopping by water sources and with a fleet of ships close to shore for supplies and care for the wounded.   Salah ad-Din moved his troops to prevent the Crusaders' advance, initially harassing the Crusader column with archers and skirmishers. He soon realised the greater range of the Crusaders' crossbows meant this strategy was ineffective.

On the morming of 7 September Salah ad-Din hid his forces in the Wood of Arsuf, some 6 miles south of the Crusaders' overnight camp.   King Richard assembled his column as normal: his suppply wagins were closest to the coast, with 12 units of knights protecting them, screened by infantry and crossbowmen to the landward side.   The Knights Templar, under the command of Grand Master Robert de Sablé, took the van, followed by units of Angevins, Poitevins, Englsh and Norman knights. The Knights Hospitaller, led by Grand Master Garnier de Nablus, brought up the rear.

Salah ad-Din ordered the attack once the Crusader army was fully on the move. His troops burst out of the Wood of Arsuf clashing cymbals, blowing horns and shouting in an attempt to unsettled the Crusaders.   Nubian and Bedouin foot skirmishers led a series of attacks, luanching arrows and javelins at the Crusaders before parting to allow Ayyubid horse archers to attack and wheel off. The Crusaders, screened by corssbowmen and infantry, held their ranks and Ayyubid attacks moved to focus on the Knights Hospitaller in the rear. Salah ad-Din himself took part in the attack on the Hospitallers, many of whom were forced to walk backwards to defend against attacks from the rear.   Richard urged his forces to keep advancing towards Arsuf and denied the Hospitallers' reqwuests to counterattack until he Templars in the van reached Arsuf in the early afternoon.   The Hospitallers - whether acting on Richard's orders or of their own volition - charged the Ayyubid forces, followed by the unit of French knights in the column before them. One story says the charge was led by Baldwin le Carron, one of King Richard's retainers, and the marshal of the Hospitallers shouting, "St George!"   King Richard realised the attack, whether planned or opportune, had to be supported and ordered as general charge. The Hospitaller attack fell on the densely packed Ayyubid right wing, causing many casualties and starting a riot. The Muslim historian Baha ad-Din, serving in the centre, said the rout of the Ayyubid right flank was complete, and when the centre copllapsed he looked to join the left flank, only to find it retreating as well.   King Richard halted his knights' charge after a mile, regrouped and charged again. The Ayyubid cavalry also regrouped and met them, but a third charge broke the Ayyubid forces, who scattered into the woods and the hills beyond them.

Despite considerable losses the Ayyubid army was not destroyed, but was shamed by the rout, while the Crusaders' morale improved.   Salah ad-Din rallied his forces and continued skirmishing, but was unwilling to risk another full assault. King Richard was able to continue the march to Jaffa and take the city, along with the fortress at Darum. Salah ad-Din demolished the fortresses at Ascalon, Gaza, Blanche-Garde, Lydda and Ramleh rather than risk them falling into Crusader hands.

The Battle of Arsuf secured the Crusaders' hold on the coast of Palestine, weakening Salah ad-Din's hold on Jerusalem. King Richard realised he would be unable to hold Jerusalem even if he captured it, however. Following the Battle of Jaffa, King Richard and Salah ad-Din signed the Treaty of Jaffa, pledging a truce for three years, and allowing Christian pilgrims to visit Jerusalem.
Included under Conflict
Third Crusade
Conflict Type
Battle
Battlefield Type
Land
Start Date
7 September 1191
Conflict Result
Crusader victory 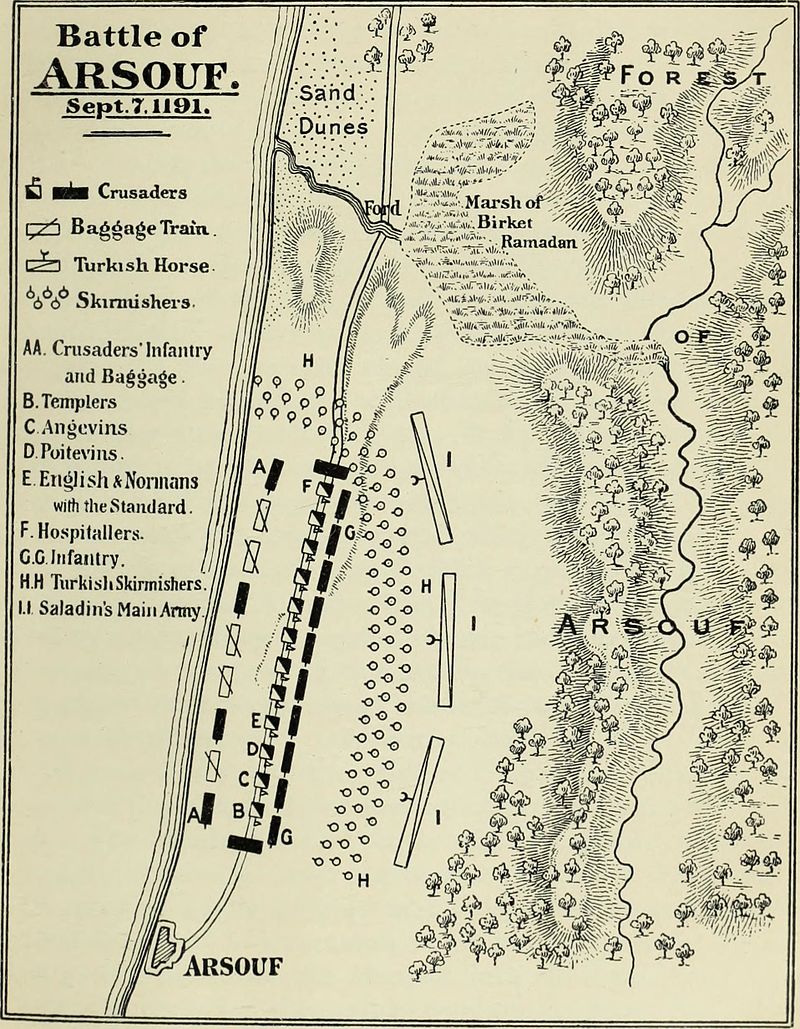