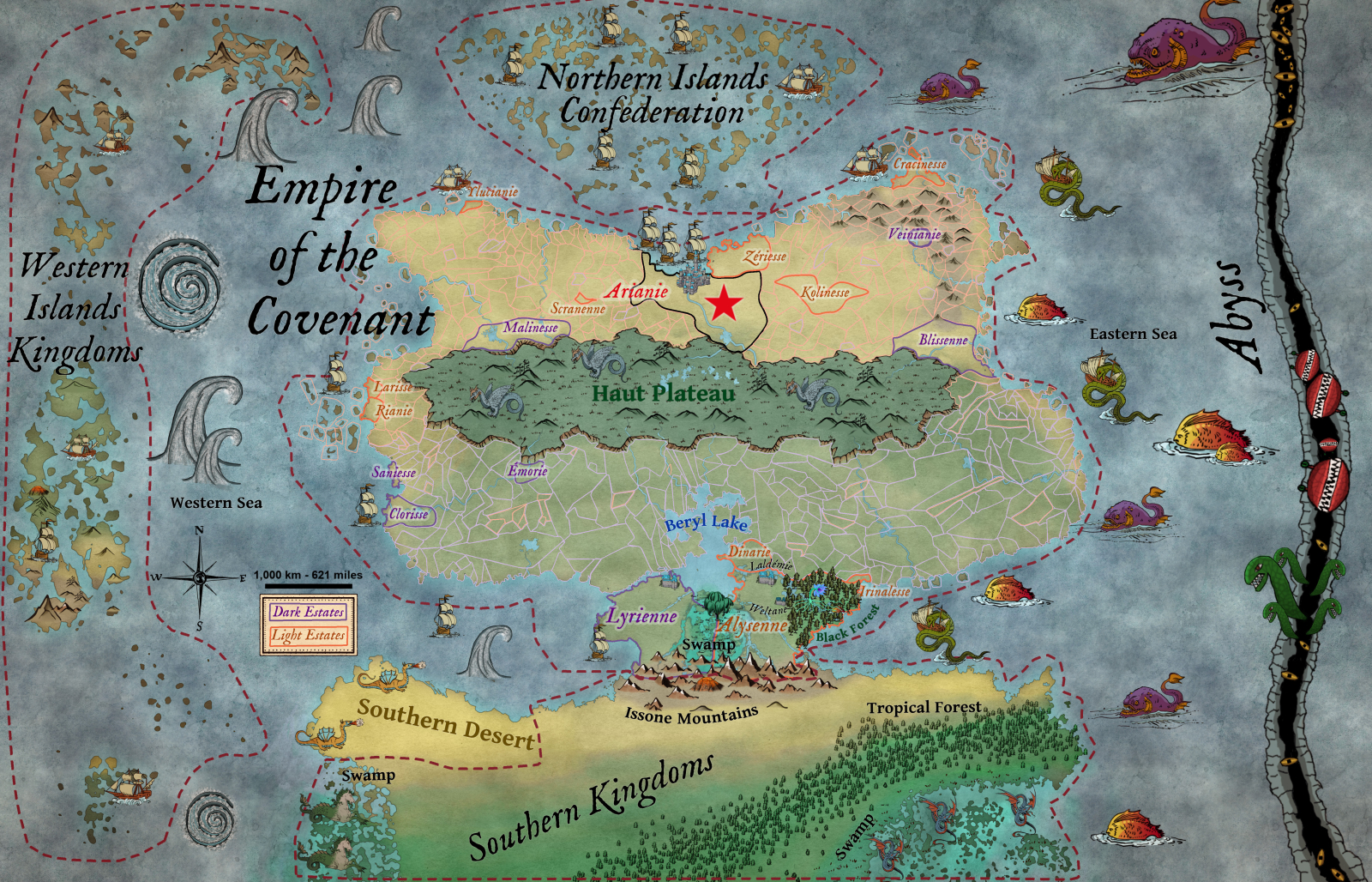 Political Organisation of the Empire

History of the empire


Before the empire was founded, the Estates of Lyrienne and Alyssenne formed a personal alliance together which allowed them to stand united against invasion from the Southern kingdoms and their Northern neighbours. Due to their strong powers and influence, they quickly gained alliances with their closest neighbours. Together, they formed the first iteration of the empire which was occupying the Southern half of what it is today. They fought united against the invasion attempts from the Southern kingdoms, further strengthening their alliance. However, this made them appear as a danger to their Northern neighbour who decided to unite against them. This new alliance was formed around the Estate and House of Arianie, located at the extreme North of the continent. Both sets of alliance fought long and bitter wars against each other.

Nevertheless, they finally decided to form a united empire together in order to put an end to this deadly conflict that was ravaging families on both sides. The triggering event was a particularly dangerous ritual that went out of hand and devastated many Estates near the border region. The empire united and each ruler of the Estates became a member of the new senate who was charged with establishing new laws that would be applicable over the whole empire. The location of the senate was chosen to be in Arianie, as a concession to convince the House of Arianie to join the project. Since the tension between both groups was still very present, any strong display of magic inside of Arianie was soon forbidden. Nowadays, the House of Arianie is extinct, but the senate has decided to keep the Estate of Arianie under its direct protection and the rulership of the federal government rather than appoint a new House at its head and risk a resuming of the conflicts.

Geography, Climate and Demography of the Empire

Overview of geography and demography

Overview of the Society of the Empire


Each Estate is ruled by a lord and lady. The choice of those rulers is not made through laws but can often result in deadly conflict. In the most peaceful circumstances, a ruler will choose their favourite candidate among their family members and groom them as their successor. Once they die, the rest of the family and Estate will accept that decision and the new leader will be listened to.   In practice, many problems can occur for different reasons:
Through the history of the empire, the assassinations of the rulers of the Estates have been very common. If the assassin can hold the Estate against attempt at reconquest from the previously ruling House and the rebellion by the people living in the Estate, they become the new ruler and take their place in the senate. To be recognised as such, they need to hold the wards of the Estate and of the manor house. The assassin then becomes a member of the high nobility, while the previous ruling House is demoted to lower nobility. Such assassination used to be extremely common among ambitious mages not belonging to the nobility or among the youngest members of the nobility who had not been selected as heir.

The link between a ruler and the land

The reason why those local leaders have so much power is that magic is linked to the land. Over several generations, powerful magic users can develop bounds with the land and those bounds will give them a magical advantage over less powerful individuals or foreigners through strengthening their wards and rituals. Nevertheless, if someone still manages to kill the ruler of the Estate, they can take control of the land and the wards and force them to do their binding, although the link will be more fragile.

One benefit of the strong link between the ruler and the land is that they are both able to strengthen, heal and communicate each other. Through this, the rulers can tell how much resources can be extracted from the land without damaging it, and they can help the land regenerate. They can also increase its output and the magical and nutrients concentrations in it. 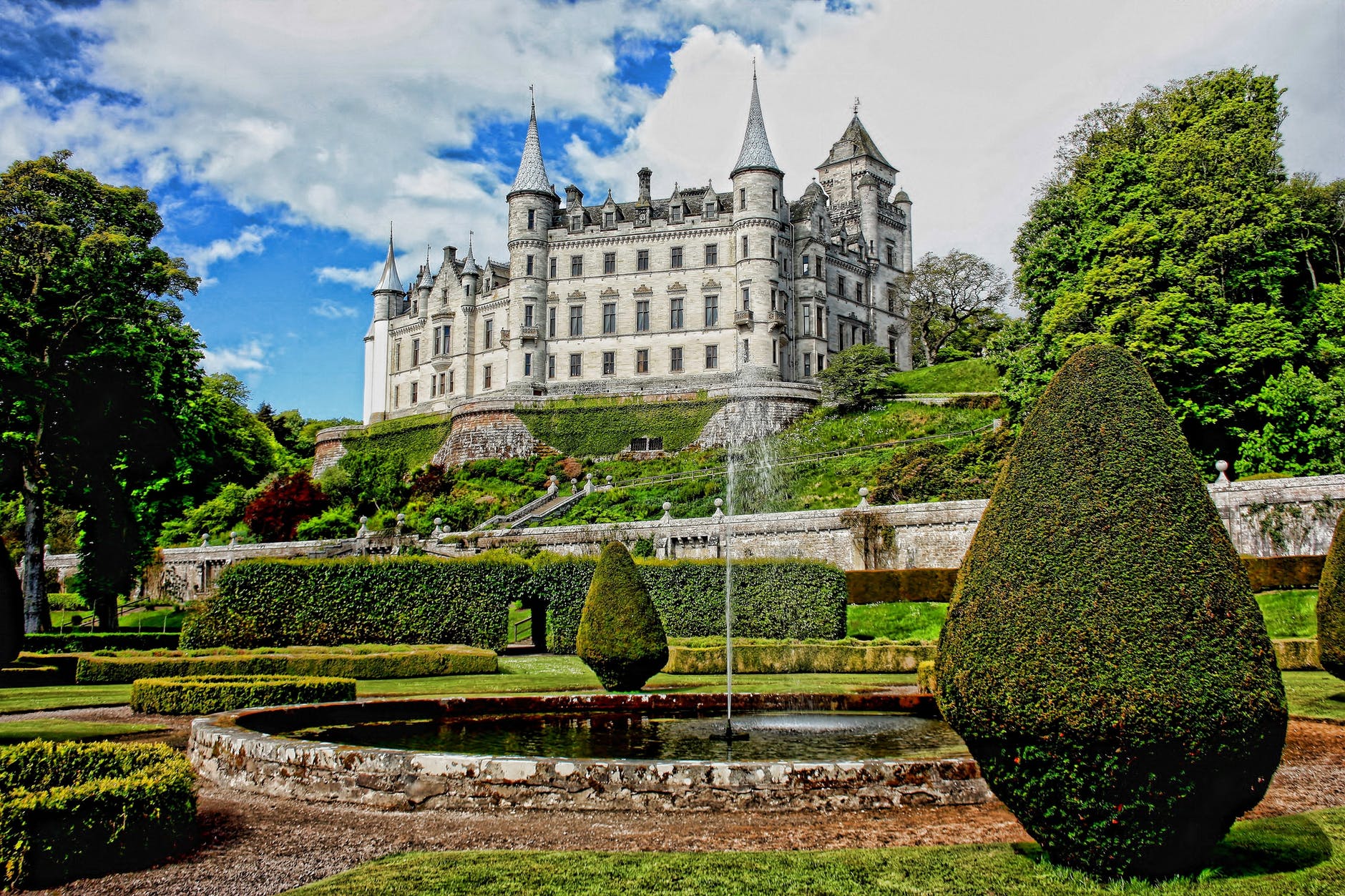 A water basin in the manor of an Estate that is typically used for introduction rites, by Pexels


The empire is ruled by a senate. Members of the senate are the higher nobility, that is to say the ruling lords and ladies of the Estates. The lower nobility - the family of the previous rulers of the Estates who have lost them through conquest - have no political power. The senate is headed by two lord consuls. One of them is elected by the lords and ladies, while the other one is the head of the government. The government only has the power to apply the laws and edicts voted by the senate.

The empire is only a loose confederation of Estates and as such its power is extremely limited. In practice, it only regulates trades and the practice of dangerous magic which can endanger the whole empire. The power of the government is limited, and they only have access to a small army which can do little to force the rulers of the Estates to obey them. The government is elected by all the nobility, high and low, which makes it very popular with the low nobility.

Example of successful and unsuccessful laws: The empire has been once devastated by magically-generated diseases and this lead the senate to gather and to make laws to protect them against similar occurrences - but not before half of the empire had been devastated. On the contrary, when the senate attempted to outlaw weather-magic, this started a civil war that only ended after its abrogation - but not before a significant portion of the Estates having supported it found themselves several metres under water.


Since its foundation, the Empire has been divided into two political parti, the Light and the Dark factions. The main difference between them is that the Light is in favour of more regulations and so of the establishment of a stronger government, while the Dark is against it. Those regulations would apply to many fields, such as the interdiction or stronger regulations on many different types of magic, more laws regulating trade, the outlaw of slavery and laws regulating relationships between powerful mages and individuals without magic.

The leaders of the Light parti have traditionally been the House of Alyssenne while the Dark parti has been ruled by the House of Lyrienne. While both of those Houses are located at the extreme South of the empire, most of the Estates in the Southern half of the empire have traditionally been aligned with the Dark, while those in the North have been aligned with the Light, although they are many exceptions.


Important trade relationships exist between the empire and the Northern Islands and the several nomadic people living in the Steppes in the middle of the Empire. Both of those groups of people have widely different magic from the rest of the empire, and this high specialisation give them an incontestable advantage that has allowed them to resist any attempt of invasion. If they encounter any political instability, it is always from the inside of their own society.

The Southern Kingdoms have a highly hostile relationship with the empire. They have been numerous invasion attempts and wars between them and the Southern Estates, in particular the Alyssenne and Lyrienne Estates that have stood guard over their common border for millennia from even before the creation of the empire. Once the empire was founded the influence of those Estates only increased, and it can now reach even the Southern kingdoms, which has really embittered them.

Great lore! I see that you named your legislative body the Senate which I also does for one of my organisation, I found that funny.

Thanks :D I think senate is a rather common name for a legislative body, we even have one in France XD I think you do too in Canada, right?

Yeah, but it must be said that it is generally a bit unnecessary and undemocratic because the members are appointed for life as well as directly by the prime minister.