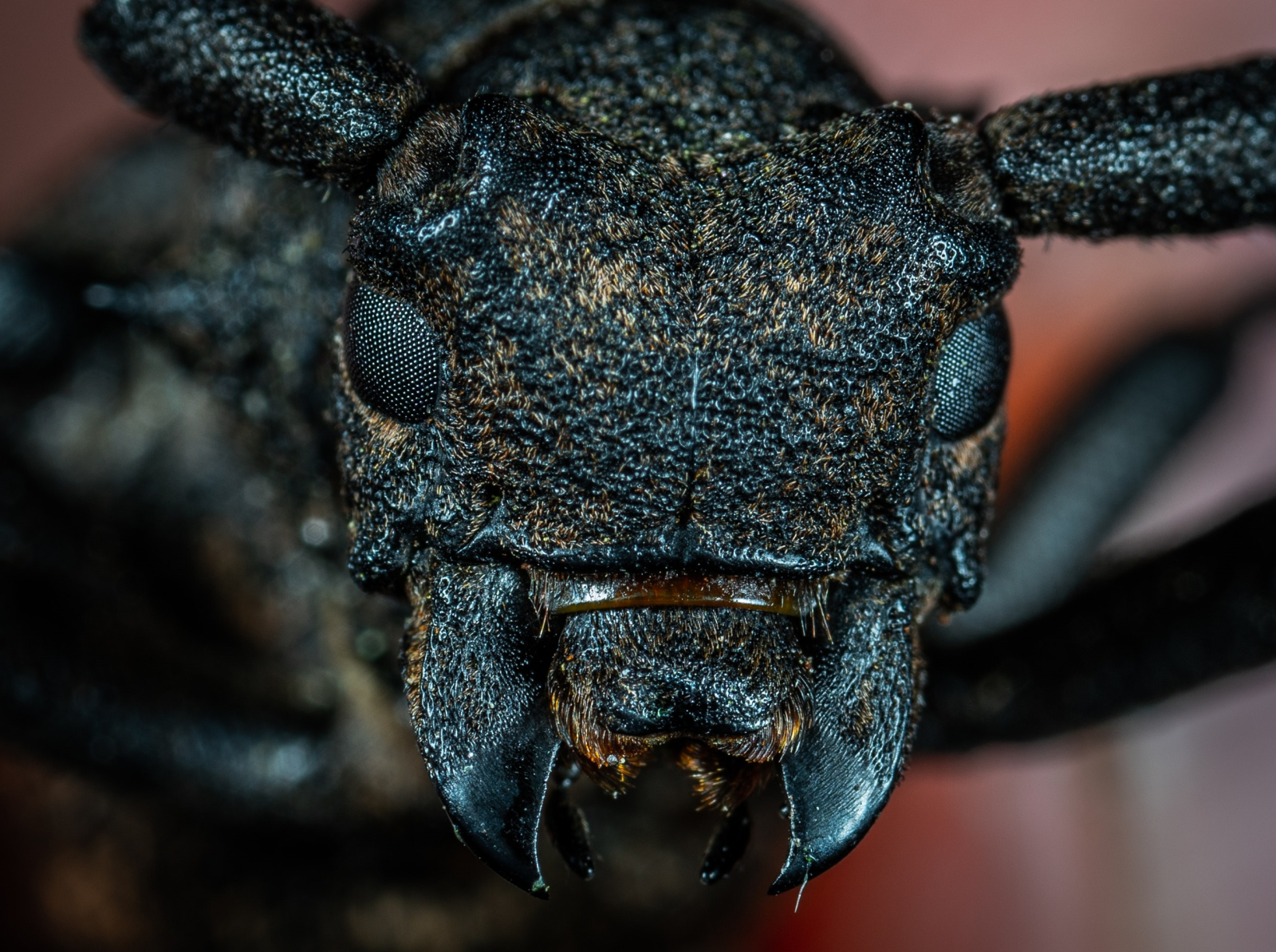 "I once thought that all insects were beautiful, in both appearance and in design, but I find little appealing in this infernal creature."
— Eldri Ennis Ento, gnome expert on insects

The Cloakfly is a very rare, strange, and dangerous creature that resembles a gigantic insect. The origin of both itself and its name has been lost to time. Some suggest that its long, wide, leathery wings make the creature look like it is wearing a long cloak, others say the name comes from its ability to change colors and blend in so well with the surrounding environment.   Its dark appearance and alien behavior is equally complemented by its ravenous appetite for sentient flesh and disturbing reproduction methods. Not only are corpses not safe from this demonic creature, but the living fare even worse than the dead by contracting The Morphis and becoming a Cloaker.

This alien creature most closely resembles the body type of many of the planets insects.  It has three main body sections consisting of a head, thorax, and abdomen.  The head contains the complex eye system, two large antennae, and mouth with large sharp mandibles.  The mid section or thorax contains its six strong legs and two very long and wide, flexible wings.  The abdomen contains the stomach and many internal organs along with a long, sharp ovipositor for the females and a long, sharp spike for the males.

There are three main stages that the Cloakfly undergoes. First, it is laid as an egg inside of the body of sentient creature. Here it develops for three days before hatching into a larval form. The larva stays inside of the host body for two more days, feeding and developing into the Cloakfly stage. After this time the Cloakfly emerges from the host as a fully formed adult.

From what little is known, it is believed that these creatures can live in any type of environment. Tales have been told of several that have even lived in the harsh conditions and poisonous atmosphere of the Hraun volcano. Vegetation does not seem to be a factor as they only feed upon fleshy animals. Experts have speculated that due to their weakness towards cold and the lack of animal life in the far north and south, that they have so far avoided those polar regions.

The Cloakfly appears to only feed upon the flesh of a living being or that of a recently deceased being. Their high intelligence, excellent camouflage, and ambush tactics allow them to successfully prey upon all manner of sentient lifeforms.  Their appetite does not discriminated between human, orc, dwarf, elf, goblin, Lacertian, or anyone else.

Little is known about this species social structure as few people have been able to observe them and live to tell the tale. What we can tell for certain is that these are usually solitary creatures that do not interact with other unrelated Cloakflies. However those that are genetically related do seem to nest together and have been seen working together in packs.   A newer notion of Cloakfly "Queens and Kings" has recently been discovered in the spellbooks of the dark elf, Scuro Bloodshroud. Here he discusses his observations of a large lair of Cloakflies that seemed to be controlled by an unusually large male and female. The subordinate cloakflies would make an effort to visit the pair just before leaving the lair and immediately upon their return. The King and Queen never left the lair themselves but their subjects would bring them prey to eat. His observations continued for some time before he was finally killed by The Dark Hand assassins and the lair was destroyed.

This species is wholly incapable of being trained, tamed, or domesticated.

There are no known uses or byproducts that can be derived from this species.  Both good and evil communities have agreed to kill these creatures on sight and destroy their bodies immediately afterward.

It is believed that these creatures are not native to this world and have come from one of the lower planes or pocket dimensions. Their entrance to our world can take place anywhere where the dimensional fabric is weak.  Ancient reports show that they have periodically been found in warm climates as well as mountainous locations.  So far there are no reports of this species being found in the polar regions.

Despite its insect appearance, this creature has a surprisingly intellect that allows them to use simple sounds and body movements in order to communicate and cooperate with each other when they need to. So far they have not been observed trying to communicate with other species, whether this is because they are not capable or are unwilling is still unknown.  Recent insight into this species indicates that the Queens and Kings have a much greater intelligence than their average subject Cloakflies.  Some believe that they have around twice the intellect and can plan elaborate traps and ambushes.

The Cloakfly is equipped with several sensors that allow it to be a successful apex predator. The compound eyes are made up of hundreds of multifaceted single eyes that give a much larger field of vision and incredible depth perception. Not only can they see colors but can also see into the infrared spectrum and see the heat signature of their prey and surroundings. Additionally the complex eyes can gather more light which allows them to see in almost complete darkness.   Tiny hairs along their segmented bodies can detect the slightest air movements, vibrations, and sounds, which alerts the Cloakfly to any creature moving in their immediate vicinity. Their incredible antennae are impressive chemical sensors that allow them to detect the faintest chemicals and smells that are carried on the wind or left on the ground weeks earlier. The Cloakfly pairs a memory with a smell enabling it to track specific prey over long distances and time.

Aside from its excellent camouflage, hearing, smelling, and vision, the Cloakfly's tough, flexible chitinous exoskeleton provides immunity to poison, acid, natural fire and heat, and takes half damage from magical fire, electricity, and bladed weapons. These great senses also allow it to see through most illusions as well.   A rare weakness would be towards cold, in which the damage is doubled.   Of particular interest is the bite of the Cloakfly itself. The saliva of both the female and male Cloakflies contain a powerful paralytic agent that significantly slows down and can even paralyze the victim within moments, leaving the prey to helplessly watch as they are eaten alive. In addition to this, the Queens and Kings have the ability to Persuade and influence the victims through an unknown means, often having them walk back to their lair or lead others into an ambush.
Genetic Descendants
Scientific Name
Daemonis Hellgrimous
Origin/Ancestry
Scholars and historians agree that this strange and deadly species must have originated from someplace beyond our world as there is nothing like it natively living on the planet.
Lifespan
The life expectance of this species as a whole is completely unknown.
Conservation Status
Despite being an exceptionally rare species, this creature is not under any protection status. In fact, due to its incredibly dangerous nature, all intelligent creatures that encounter this insect are highly encouraged to kill it or report it immediately if unable to safely destroy it.
Average Weight
Reliable weights are hard to come by as most specimens brought in to study have been cut, slashed, and beaten to death with a great loss of bodily fluids, however estimates put these armored insects between 40 and 50 pounds.
Average Length
Measurements taken from cadavers shown that the males usually grow between 18 and 21 inches in length, with the females typically growing a bit larger, ranging from 20 to 24 inches in length. Some experts have begun to refer to these larger versions as the king and queens of the species.
Body Tint, Colouring and Marking
The Cloakfly has a limited ability to blend in and camouflage itself within the surrounding environment due to the chromatopores inside of its cells.  Although detailed patterns can be made, the color transformations are limited to various shades of greys, browns, and blacks allowing it to almost disappear within rocky and wooded backgrounds.

"Cloakfly? It doesn’t sound very dangerous. Just a big bug."   "It’s not just a big bug, it’s a big demonic bug and it can wipe out an entire town within a week."

Tholgo Duur: Dwarven city that was eventually abandoned and destroyed by the surviving dwarves in order to stop the Cloakfly from spreading to other locations.   Misty Vale: Human settlement that was in conflict with a young black dragon, Miasmatonis. A bargain was reached and an alliance formed between human and dragon in order to destroy their common Cloakfly enemy.   Nu Ven: Dark elf town where Scuro Bloodshroud secretly studied the Cloakflies before he was killed and the lair destroyed by The Dark Hand assassins.

"We don't know where it comes from, what it wants, or how to get rid of it. All we know is that when it comes, ruin and death follow closely behind."
— Darcram Regnis, Master Of Beasts