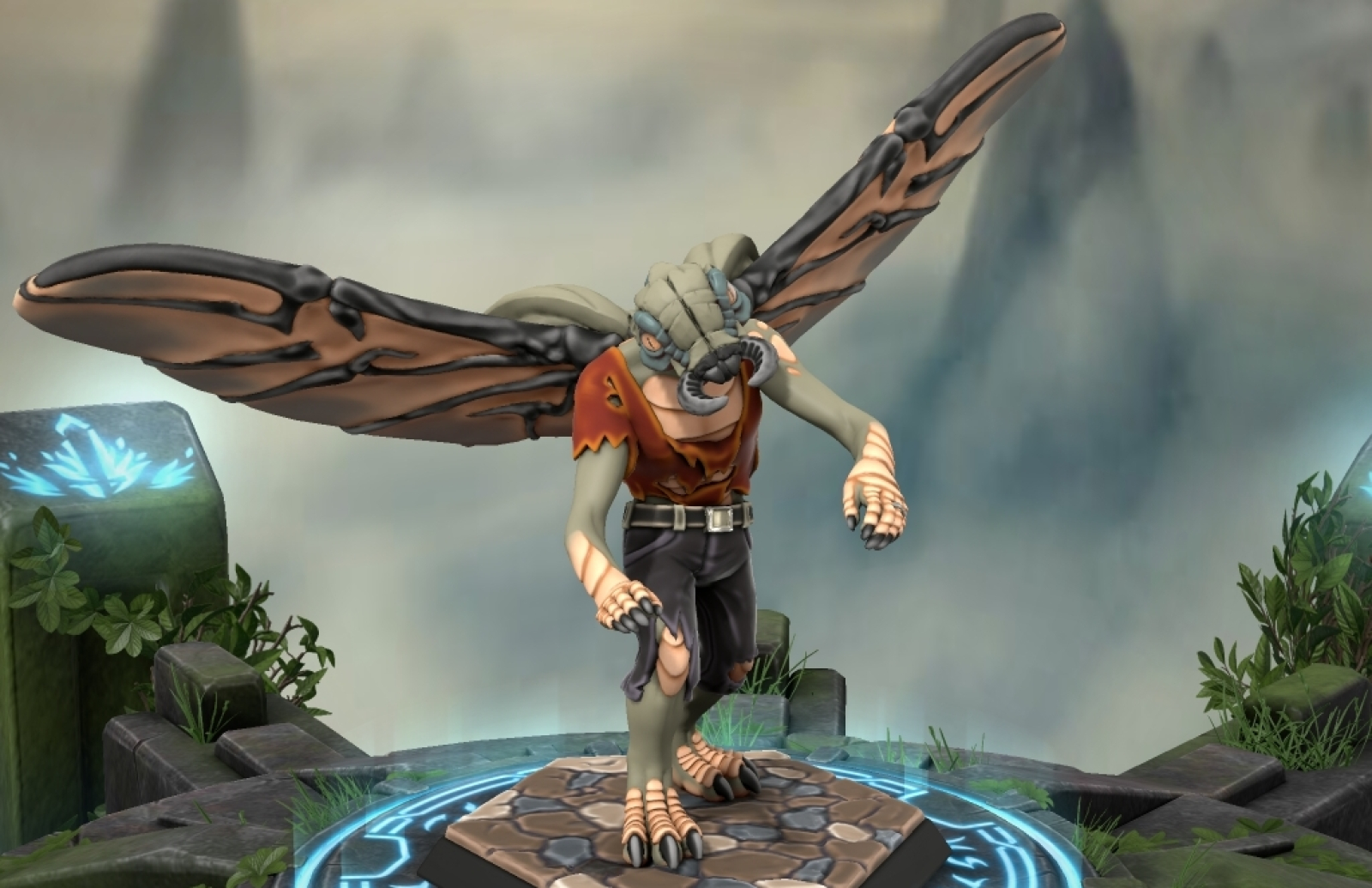 The Cloaker is hideous, infernal, and evil creature with an appetite for the flesh of sentient creatures. Resembling a combination of humanoid, demon, and insect, it hunts intelligent beings, feasting on their flesh and using their corpses as incubators for their Cloakfly parents. Their physical and mental abilities make them a considerable threat to even the most advanced and prepared adventurers.   It is believed that their name either comes from the ability to change their colors and camouflage themselves within the natural environment or from the appearance that their long leathery wings make as they wrap around themselves. The origin of the name is more certain than the origin of the Cloaker itself, with many speculating that they must come from other planes or other dimensions, some have even suggested that unnatural magical experiments may even be the cause of a terrible blending process. Whatever the case may be, they are certainly hungry, dangerous, and unpredictable.

The Cloaker body structure resembles a cross or hybridization between its parent species of the Cloakfly and the host sentient being.  Generally, they look like a large humanoid insect with two large compound eyes on either side of its head, and giant saliva dripping, sharp mandibles protruding from its mouth.  Its grey rubbery skin and chitinous plates offer significant protection from the elements.  All of the fingers and toes end in long sharp claws and two large wings grow from its back and allow it to fly when needed.

The growth and development of the Cloaker is still largely unknown. What little we know comes from the observations of the dwarven healer, Gila Rockcairn. Apparently this species does not reproduce with others of its kind or on its own. Instead new Cloakers come from its parent species, the Cloakfly. These insidious creatures will attack sentient creatures and deposit and egg into a living victim. After the Morphis occurs, a new Cloaker is produced, transforming the host from its original being into a hybridized Cloaker.   Male victims will produce males Cloakers and female victims will produce female Cloakers. However the most disturbing is when pregnant victims are implanted with an egg. Irregardless of the unborn's gender, the new Cloaker is always a female Queen Cloaker.

It seems that the Cloaker begins as an egg that is implanted into a living host by the infernal Cloakflies.  After implantation, the egg is slowly absorbed and incorporated into the genetics of the host.  At the conclusion of the five day Morphis disease, the host is completely and irrevocably transformed into the new Cloaker. All personality and aspects of the host are permanently lost during this process.

These creatures always follow in the footsteps and devastation of their ancestral parents, the Cloakflies.  They are usually found in warm or temperate regions but have been known to branch out into other types of areas as well, including harsher conditions such as the Hraun Volcano.  While it is believed that they can live in any environment, the lack of food species in the polar areas prevents their spread to those locations.

The Cloaker has only been observed feeding upon the flesh of an intelligent living beings or that of recently deceased beings. They can successfully prey upon all manner of sentient lifeforms due to their high intelligence, excellent camouflage, and stealthy ambush tactics. Their appetite does not discriminated between human, orc, dwarf, elf, goblin, Canin, or anyone else.   Rumors persist that the reason for their prey items is that they have a need for and are drawn to creatures with a soul and that they somehow consume the soul along with the flesh. Others have suggested that they need to feed on intelligent beings in order to maintain their own cognizance.

The social structure for a creatures such as this is very hard to observe and understand.  Most Cloakers are very solitary individuals that live and operate on their own, however the Cloakers that have the same Cloakfly parent will often congregate and work together as a loose pack.  These packs will quickly dissipate, with individuals going off on their own after a conflict or when food becomes scarce.    The exception to this is when Queen Cloakers are present.  The Queens seem to have considerable influence over all Cloakers and often direct their tasks and behaviors.  Although all Cloakers are affected in this way, those who are unrelated can often break free from this influence when certain stressers are present, those who are related have not shown the ability or inclination to break free and will serve the Queen until death.

This species is wholly incapable of being trained, tamed, or domesticated.

There are no known uses or byproducts that can be derived from this species. Both good and evil communities have agreed to kill these creatures on sight and destroy their bodies immediately afterward.

The head and face of the new Cloaker has lost all traces of its former being and now resembles a giant, mandibled insect.

These creatures are born form the Cloakfly and can be found anywhere where they are present.  If given enough time they seem to migrate towards warmer or more humid environments and away from the cold polar regions.  It is believed that these creatures are not native to this world and have come from one of the lower planes or pocket dimensions. Their entrance to our world can take place anywhere where the dimensional fabric is weak.

Despite its frightening, insectoid appearance, this creature retains much of the base intelligence of the victim that it was before the metamorphosis into the Cloaker.  While it does not seem to have the memories or abilities from its previous life, it is still very intelligent and is cunning and sly, often planning and cooperating to bring down its prey.

The Cloaker derives many of its senses, attributes and abilities from both of its parent species. Those species are the Cloakfly and whatever sentient species it uses as a host. As such, it is equipped with several sensors that allow it to be a very dangerous apex predator. The new eyes are fragmented into compound eyes that are made up of hundreds of multifaceted single eyes that give a much greater range of vision and incredible depth perception. Not only can they see typical colors but can also see into the infrared spectrum and see the heat signature of their prey and surroundings. Additionally the complex eyes can gather more light which allows them to see in almost complete darkness.   Their bodies are covered with tiny hairs that can detect the slightest air movements, vibrations, and sounds, which alerts the Cloaker to any creatures moving in their immediate vicinity. Their sensitive antennae are lost and incorporated into their newly advanced nasal cavity and acts as an impressive chemical sensor that allows them to detect the faintest chemicals and smells that are carried on the wind or left on the ground weeks earlier. The Cloaker can store an individual's chemical smell as a memory, enabling it to track individualized prey over long distances and time.

In addition to its impressive camouflage, hearing, smelling, and vision, the Cloaker's tough skin and flexible chitinous plates provides full immunity to natural fire and heat, and has limited immunity against acid, electricity, and magical fire, and takes half damage from them. Their enhanced senses also allows them to easily detect what is and what is not there, rendering all but the most detailed and powerful illusions useless against them. The Cloaker is also quite susceptible to starvation and seems to lose half of its strength after a week of not feeding. The great wings also provide a strong armored back when folded and not in use, as well as allowing it to fly when needed.   The Cloaker carries on its ancestors debilitating paralytic bite. The saliva of both the female and male Cloakers contain a powerful paralytic agent that significantly slows down and can even paralyze the victim within moments, leaving the prey to helplessly watch as they are eaten alive. In addition to this, the Queen Cloakers have the ability to Persuade and influence the victims through an unknown means, often having them walk back to their lair or lead others into an ambush.
Genetic Ancestor(s)
Scientific Name
Daemonis Homo Insectum
Lifespan
The life expectance of this species as a whole is completely unknown.
Conservation Status
This terrifying and universally hated creature is not under any protection status. In fact, due to its incredibly dangerous nature, all intelligent species that encounter this creature are highly encouraged to kill it or report it immediately if unable to safely destroy it.
Average Height
Cloakers take on the average height of the individual that served as their host species. Whatever height that being was before the Morphis, is the height that the new Cloaker will be.
Average Weight
Cloakers take on the average weight of the individual that served as their host species. Whatever weight that being was before the Morphis, is the weight that the new Cloaker will be.
Body Tint, Colouring and Marking
The Cloaker has the base colors and marking of the original host in which the eggs was laid. These traits have blended with the Cloakfly and it now resembles a cross between them with grey skin and chitinous plates.   The Cloaker also has a limited ability to blend in and camouflage itself within the surrounding environment due to the chromatopores inside of its cells. Although detailed patterns can be made, the color transformations are limited to various shades of earth tones, allowing it to almost disappear within rocky and wooded backgrounds.
Discovered by
Unknown

"The only weaknesses that I've seen so far, is that it doesn't fare well against the cold, starvation greatly hinders its fighting skills, and its inability to produce more of its species on its own. I wish that there was more, but that's all that we have figured out so far."
— Romin Sunbreaker

Tholgo Duur: Dwarven city that was eventually abandoned and destroyed by the surviving dwarves in order to stop the Cloakers from spreading to other locations.   Misty Vale: Human settlement that was in conflict with a young black dragon, Miasmatonis. A bargain was reached and an alliance formed between human and dragon in order to destroy their common Cloaker enemy.   Nu Ven: Dark elf town where Scuro Bloodshroud secretly studied the Cloakers before he was killed and the lair destroyed by The Dark Hand assassins.

Cover image: by by me from HeroForge

Great and detailed article, definitely not a creature I'd want to run across. I like that it keeps the intelligence of the host instead of becoming an instinct-driving creature.