The Ebensberg prison was, for a jailhouse, relatively comfortable. In the two days the First Princeps had spent there, he noted the quality of the food (fresh baked bread, with cooked offal and trimmings served in a hearty soup) and the fact that the guards had offered to provide a change of bedding. The torches in the wall sconces were changed every six hours with clockwork precision.   "...in the sixth cell? What do you mean, 'he was suspicious'?" A familiar voice echoed faintly.   "Asked lots of questions, never gave a straight answer for his name, seemed like an agitator of some kind." The door to the cell block opened, and two guards strode in. One was the regular guardsman who dropped off food, and the other was a guardswoman, wearing a polished cuirass with the Ebensberg crest and a silver braid to match despite her youth. The Princeps smiled when she made eye contact; her eyes widened.   "Marko, let me talk to the prisoner alone." Her voice was even, but had a sharp edge.   "Understood, Captain." The guardsman shut the door behind him carefully. The woman regarded the Princeps with a neutral expression.   "So, what are the consequences for Ebensberg?" The woman unlocked the cell door. "I accept full responsibility for this mistake and request that punishment be on my head only for violating the Princep's person, and not to the city writ large. That is your new title, right? Princeps?"   "Why would anyone be in trouble for enforcing the law?" The Princeps stepped out of the cell and rubbed his hands together. "It isn't as though I told anyone who I was when I got here, Nairie."   "Another one of your nonsense tests." Nairie Solitus folded her arms. "Forgive me for questioning your decisions, but you did end up in a jail cell. What are you doing here?"   "Talking to you, mostly." The Princeps waved a hand. "You were the only one of the nobles at the summit to reject your title and you left without much of a word. Piqued my curiosity."   "I'm not a noble, first off, and I had no interest in whatever game you were playing, pulling those nobles around as puppets dancing to your song." The guardswoman narrowed her eyes. "As you can see, I am a captain in the city guard and no more. Nothing's changed since we parleyed those years ago."   "Yes, merely a local city guard." The Princeps laughed. "I must say, this sort of prideful humility is refreshing. To be honest, I'm as sick of talking politics with the nobility as I imagine you would be." He put the hood of his cloak up. "Have you eaten yet, Nairie?"   "No." She seemed confused. "Is this a direct order from the Princeps, then?"   "I was hoping it was more of an invitation. Conversation over an early dinner will help shake out the prison stiffness. Unless, of course, you have duties elsewhere." The Princeps smiled.   Nairie gave him a long look. "Alright, well, I know a good tavern a block away. I don't know what you're playing at, but I'm willing to humor you for now."

In her youth, Solitus was a guardswoman of some martial talent, as she earned her place in the city guards by merit and was a skilled sword duelist. She maintained her athleticism all her life, regularly practicing and sparring even into her middle age.

A large knife scar ran up across the bridge of her nose over her forehead, received in service as a guard in Ebensberg. She refused cosmetic treatment of the scar at any point, and gave a direct order to her sculptor to have the scar prominent on her portrayal.

Though she was pressured by the other nobility to be dressed by an elite couturier, she preferred the simple and unfashionable garb of a working burgher, attending political and social functions in nothing more fancy than a pressed linen blouse and modest skirt. Her only concession was a simple lapis pendant she wore around her neck as an adult; she never verified the pendant's significance.

Nairie Solitus was a native of Ebensberg, one of the small city-states dotting the shore of the Bui Sea along the eastern traverse of West Saibh. Born to common circumstance, she rose to become a Captain of the Ebensberg City Guard at a very young age just before the onset of The War of Unification. Ebensberg is only four day's ride away from the Kingdom of Nasse and was one of the first territories in the King of Nasse's (later known as the First Princeps) path of conquest.   The King's disgust at the indolence of nobility across Saibh was well known, and Ebensberg proved a ready example. Upon hearing of the defeat of the massed coalition forces at the outset of the war, and knowing their position was untenable, the wealthy nobles and officers of the city abandoned it virtually overnight, fleeing to other territories, looting the city of much of its valuables in the process. Solitus found herself the last remaining person in Ebensberg of any official rank whatsoever, and took it upon herself to rally the people of the city in defense against Nasse's conquest force, amidst rumors of wholesale slaughter and wanton destruction.   When the King of Nasse himself took the field against Ebensberg the next day, he was well aware of the situation in the city and requested a parley with 'whoever is left in this place to talk to'. Solitus met and spoke with the King at length; discussions went well into the night and the rest of the week before the conquest forces moved on. Solitus had extracted from him promises to leave the city unharmed in exchange for free passage for his supply trains. Notably, she rejected the King's offer of a title, preferring to simply remain a guard captain, though she in effect governed the city until the end of the war.   Upon the close of the war, she was invited to the grand parley at The Assembly at Kraj Zeifluss, and again rejected the offer of entitlement as District Commander of Ebensberg. This behavior vexed the First Princeps, who subsequently learned that the citizens of Ebensberg under her rule had adopted a general anti-noble sentiment (understandable, given the behavior of its former nobility) and that her governance of the city was merely implicit as a captain of its city guard, maintaining order. Visiting the city in disguise to learn more, the First Princeps marveled at the loyalty on display from the local citizens, who greatly respected Solitus as an evenhanded and humble leader by circumstance.   Much has been said about how Solitus had the First Princeps arrested as a 'suspicious traveler', and the subsequent tumult has been repeated fodder for comedies at the Grand Amphitheatre of Etoile, but suffice to say that the First Princeps eventually took Lady Solitus as paramour (or perhaps the other way around), and successfully persuaded her to leave Ebensberg for a time to serve the greater Principality of Etoile as his most trusted officer and representative.   Lady Solitus was never away from Ebensberg for more than four months at single length, but traveled the Principality widely, serving as proxy for the First Princeps, adjudicating disputes, managing the integration of the conquered territories into the Principality, and tempering state policy. The First Princeps gained his rule by right of conquest, but most accounts agree that Lady Solitus more than anyone else legitimized his reign and helped forge the Principality into a nation worthy of the label. She became well-known for her fairness of disposition and unbreakable sense of duty.   Nairie Solitus died in 648 as a result of a Power accident in Patino, the Machine City; the Princeps had requested that she serve as guest of honor for an opening ceremony of a new manufactory. The First Princeps and his paramour were notably and publicly devoted to each other, and her death was a tragedy felt throughout the Principality, with the First Princeps withdrawing into seclusion until his own passing not long afterward. She was given the posthumous title of 'The Dawnstar' by the Canticlers, who composed a lengthy verse in her honor for her funeral rites.

Solitus received no formal education, instead learning skill at arms while training to be a guardswoman.

Lady Solitus was a guardswoman until she became District Commander of Ebensberg; her status as the paramour of the First Princeps carried no official title but conferred great power.

Lady Solitus is widely credited with many of the tolerant policies known today in the Principality. The system of traveling magistrates is largely her doing, a way to improve the impartiality of adjudication. In addition, the unusual religious tolerance of Etoile (unusual compared to many of the theocracies Etoile conquered) is also to her credit. It will likely never be known how many policies declared by the First Princeps were in reality her ideas in origin, or tempered by her sense of justice.   Ebensberg itself prospered greatly from her continued attention, and a large portrait of its native daughter is the most prominent feature to visitors of Ebensberg District Headquarters. Notably, the Magistrates are based out of Ebensberg, in homage to the Dawnstar and to maintain a sense of judicial independence from the central government in Etoile.

Her most famous quote is inscribed on her statue's plinth in the Etoile Capital City:
"It is easy to merely serve the self."

Lady Nairie Solitus was (as far as is known) the only companion and paramour of the First Princeps, and mother to their three children.

Lady Solitus was known to be quiet and uncomfortable when amongst the nobility. She instead was at home among the burghers and common folk of the city, and was known to frequent taverns and common areas in her youth.

Nairie was known to have spent her leisure time fishing in streams and lakes. Scandalously, during a soiree in the Capital that she evidently found boring, she retrieved her pole and cast a line into a decorative fountain from a second floor balcony, and refused to budge from the balcony until she 'caught a bite'.

A story widely shared is that when the First Princeps paid a visit to Solitus' home in Ebensberg, he was shocked to see that she slept on a simple straw mat in a rented room at a hostel, with her only worldly possessions being a trunk of well-mended clothes and a small wooden cup. Lady Solitus maintained this thrift her entire life, with any personal wealth she accrued being sent along to Ebensberg for charitable purpose. 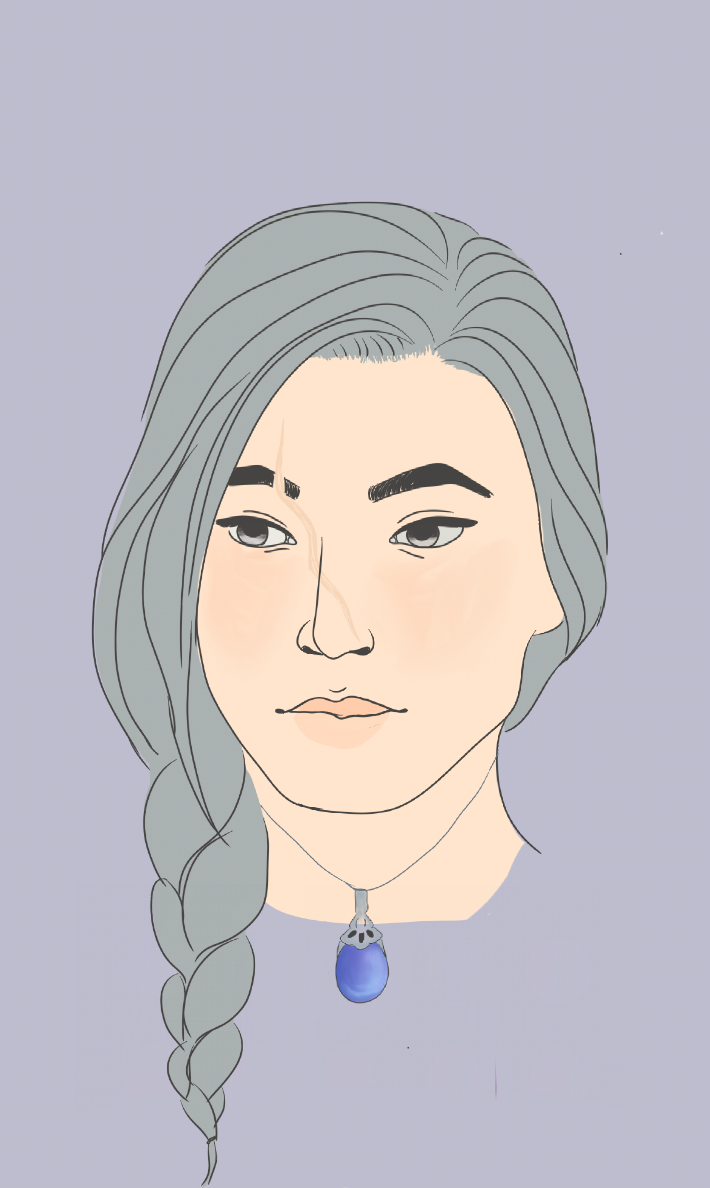 Remove these ads. Join the Worldbuilders Guild
People
Unless otherwise stated, all images are attributable to Pixabay or Unsplash and used under their open license, and cropped to size by myself.
Global Header image by darksouls1 on Pixabay
Global Background illustration by stux on Pixabay