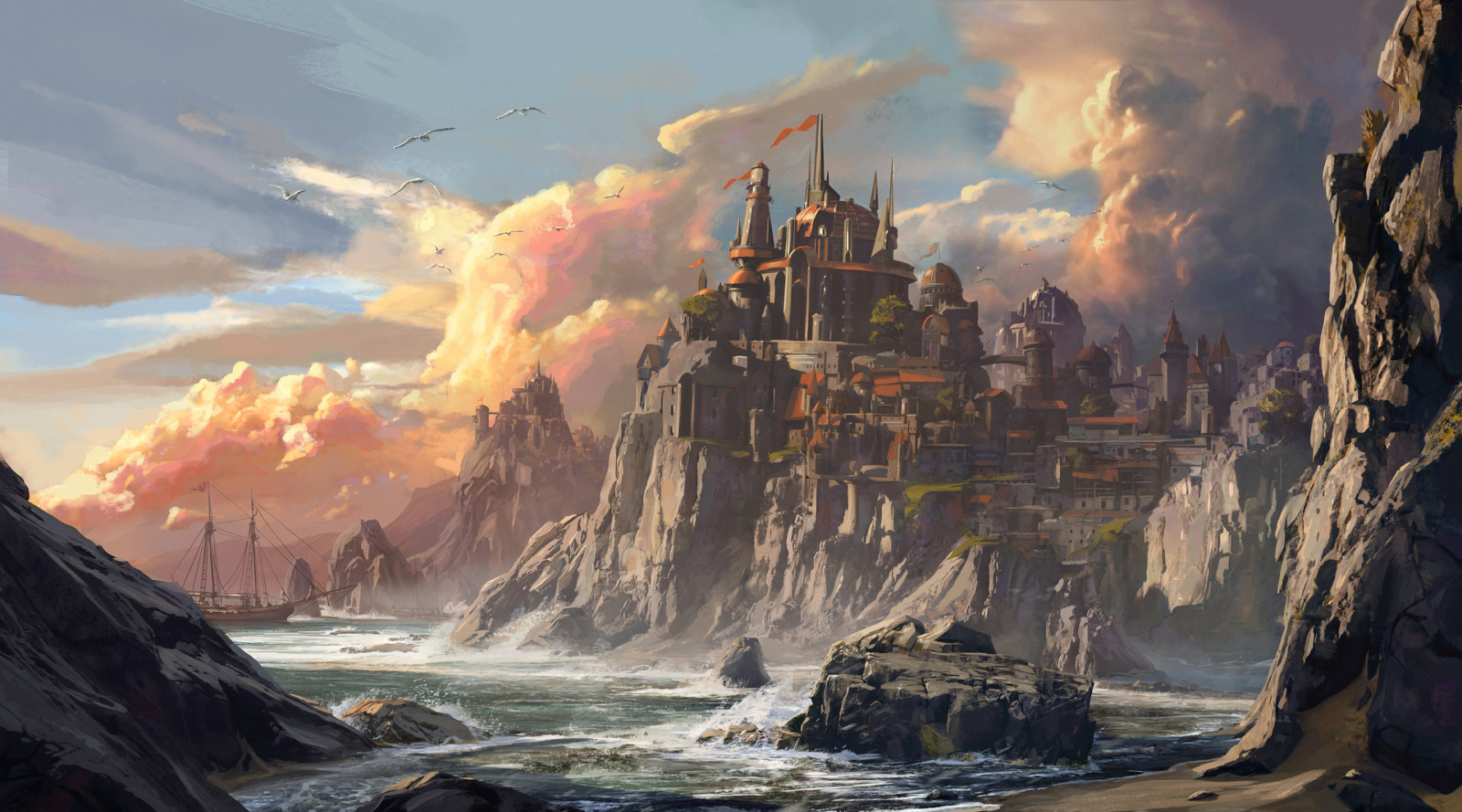 Eshia is a confederacy of free cities and lands which are self-governing yet interdependent for protection and trade, forming one major economic block supported by the Free Armies of Eshia. While the Free Armies have conscriptions from every town and city of Eshia that are responsible for their outfitting and training, in times of war the forces are organized and controlled by the Earl of Eshing seated at Castle Eshing to the north of the Ironwood. The Three Metropolises of the Singing Coast—Ruos, Gathis, and Horizontus—comprise the most populated region in all of Creacia, and each has their own defined area of influence and taxation with their own governing system: Ruos is a theocracy, ruled by the (supposedly) benevolent Sunpriest of Iomedae; Gathis is an oligarchy, governed by the Five Merchant Lords; and Horizontus is a duchy, ruled by the Draether Family since the Second Ruination. Every decade the leaders of the three cities, along with representatives from the northern and southern sections, come together at Castle Eshing to elect the Earl of Eshing, who by law may not originate from any of the Three Metropolises in an attempt to avoid bias. The current holder of that title is Earl Saraial of Bronde.

Eshia, similar to the other lands of the North Centerlands, has a long history dating back before the First Ruination. The Feywood once covered all of Eshia and western Voranor, merging with the Aedyrith of Daenor to the south and Feldroth Forest to the north to form the ancient Great Forest. As the Fey magic started to dissipate around 2000 BFR, Human hunter-gatherers, Halflings and Beastien began to roam the land, clearing much of it by the time the Fireshard fell far to the east. When the Elves retreated, the industrious Humans began to form settlements and cultivate the rich hills between the Orcfists and the River Esh to the north, forming small kingdoms and city-states often warring with one another. Ephesus, the Gated City, became the first great Human-majority city of the west, rising to power under the reign of the Keltans, Soulvein-infused Half-elves who used their magic to control the region and build monumental works of art and architecture. However, the city’s close proximity to Spellspire Fel eventually drove the Keltans mad, seducing them to delve ever deeper into darker and wilder magics, culminating in the Spellscourge of 1223 AFR and the destruction of Ephesus along with the desecration of its fertile farmlands and epic monuments. The remnants of the Spellscourge can still be found in the ruins of the city and the surrounding cursed swamp, the Blackmire, but also randomly throughout the region, as it attempted to spread and was only held back by an intervention from Nethys herself, who broke from her immutable neutrality to stop the corruption from infecting all magic.

After the Desecration of Ephesus, Eshia was devoured, piece by piece, by the ascending Kingdom of Voranor. The Three Metropolises had been established in the first millennia but began to grow rapidly in the 15th and 16th centuries. They formed a coalition to fight off Baenric the Bold's western expansion in 1562 but were unable to stop the infamous Knights of Nethereth and finally surrendered at the Battle of Gathis, officially becoming part of the newly established Voran Empire in 1568. The Eshians stayed under the iron fist of the Voran Church for 600 years, the cities of the Singing Coast used as the main ports to trade with the Thraxian Empire and Akad, the rich farmlands cultivated by enslaved or indentured Eshians and foreigners alike to feed the Empire’s massive slave armies. The three metropolises banded together several times to free themselves, the closest attempt being directly after the Schism of the Voran Church when the Magewives left en masse for Calead, but the Empire held on the most tightly to Eshia because of its vital ports, brutally crushing any attempt of resistance. It wasn’t until 2169, after the successful rebellions of Calead and Eoland had weakened the Empire, that the Three Metropolises were able to arm their slaves and peasants to form a ragtag yet inspired army. What followed was a bloody and vicious struggle fought from the docks of Horizontus to the battlements of Eshing, where the Eshians finally won their Independence in 2175.

The rage that inspired the Eshian Rebellion only grew stronger with the next generation coping with the atrocious legacy of slavery. The Three Metropolises, gaining in population and power (and secretly armed by the Thraxian Empire, eager to see the demise of its western competitor), combined forces with the similarly aggrieved Eoland and Calead to wipe the Voran Church from all of Creacia. What ensued was later deemed Iomedae's War as it was mostly led by Sunpriest Otalia of Ruos, who had been born into slavery and watched her parents slaughtered in the Rebellion. The war lasted 15 bloody years and was by far the most destructive interhuman war of all time. The Voran Church resisted with the remnants of its still mighty slave armies and the fading Knights of Nethereth, making a last stand at Vora, where more than 100,000 people were killed. Iomadae, lamenting the great cost of the war, commanded Otalia to end the invasion, which she reluctantly did at the Accord of Solace in 2230. Although the Voran Church escaped eradication, the Accord effectively ended the Voran Empire and outlawed slavery in all of the Centerlands, simultaneously creating the Chainbreakers, an elite, multinational force specifically charged with eliminating all traces of slavery.

Since the Accord, the Free Cities of Eshia have lived in peace, fighting only occasional skirmishes with raiders from Kromm, the Ogre Crags, or the Orcfists. However, several sea battles with Thraxian warships on the Sea of Strife have escalated tensions with the expanding, slavery-condoning empire. The Three Metropolises have been steadily building their navies to confront what is increasingly seen as an inevitable war with the Thraxians, and tensions along the Singing Coast are rising.

The official borders of the Free Cities of Eshia were first established at the end of the Eshian Rebellion and further defined at the Accord of Solace. It is a diverse landscape, stretching from the southern edge of the Feywood and Mirrored Chain in the north to the eastern edge of the Ironwood; from the Tower of Solace in the Golden Hills to Baenric’s Wall in the Eorune Valley; and the Orcfists and the fetid Fouling in the south. The Ironwood is a mostly lawless vestige of the Feywood where outlaws are constantly evading the constables from the shallow valleys around Castle Eshing. The most fertile lands are the inland rolling hills from the Blackmire to the Feywood, but the most populous area is along the cliffs and beaches of the Singing Coast, with dozens of smaller towns and villages rarely more than several miles apart between the Three Metropolises.

There is no official religion in Eshia and the only codified religious law is that the Voran Church is banned throughout the land in perpetuity. Otherwise, the Three Metropolises have different cultural norms of worship and tolerance: Ruos is dominated—and controlled—by the followers of Iomedae, but non-evil deities are tolerated; Abadar is the patron deity of Gathis, to whom the Five Merchant Lords pay homage in the form of huge donations to his opulent temples; and the Draethers of Horizontus worship Erastil as their family deity and honor him with monthly elaborate hunting rituals

Eshia currently produces the most foods and goods of all the Centerlands, with a work ethic built on age old traditions of hard labor as the former slaves and indentured servants of the Voran Empire. This has translated into vast wealth and prosperity for the Three Metropolises, while many of the peasants in the countryside still live in or near poverty. Ruos and Gathis are the main ports for trading with Galdeum, which relies on shipments from Eshia for nearly all of its subsistence, as well as the mysterious yet fairly common seafarers from the forbidden Isles of Lyst and the Far Lands even further to the west. Horizontus is the main port for trading to the south—with Scalia, the northern realm of the Thraxian Empire, and the rest of the coastal towns along the Gulf of Kull (besides the dangerous and extremely reclusive Wild Elves, or Jhaeranesti), all the way to grand Zolos, the Bridge City guarding the only entrance to the Gulf of Zol and the wide Dragon Deeps beyond. However, with the building tension between Eshia and the Thraxian Empire, trade has slowed in Horizontus, with pirates outfitted by the Thraxians marauding Eshian trading vessels from the Gulf of Kull to the Hycin Sea.

Freedom Or The Sword