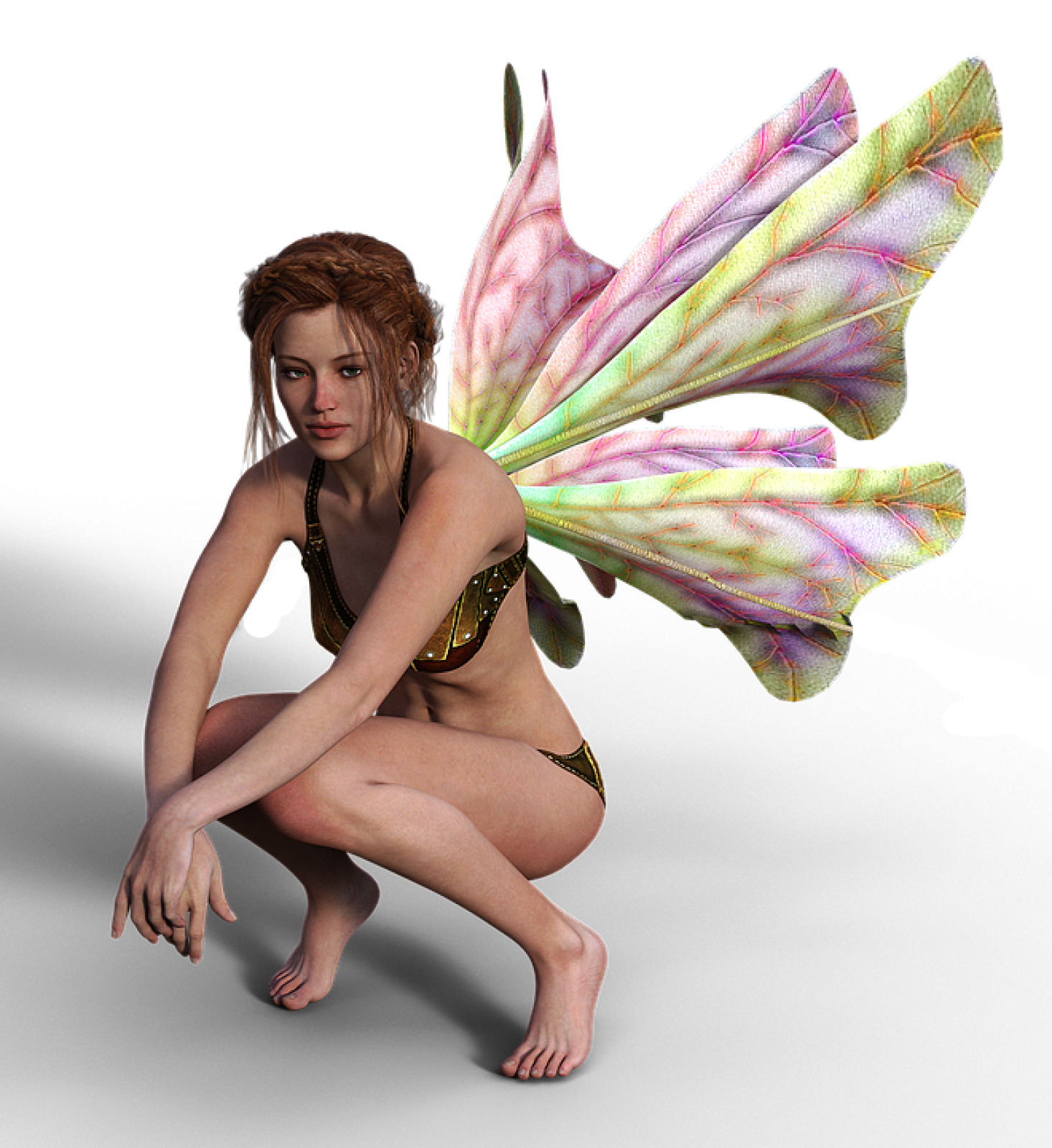 Petal help Eldrick. Petal likes Eldrick. Who is Eldrick?
— Petal to Amaryliss when hearing of Eldrick's need for help. Excerpt from Hope by Brianna Healey

Sprites are members of the Fae and they fill two very important roles in society. Giants enjoy their company whenever they get the chance, though they need to be very careful around their little cousins. A giant garden with sprites becomes even more plentiful than one without. There have been some giants who will craft small houses for the sprites in order to attract them to the gardens.

Female sprites are named after flowers, such as Rose, Lily, and Hyacinth.

Male sprites are named after plant parts such as Petal, Leaf, and Stem.

Sprites dislike being called cute.  They consider it to be belittling, considering their actual size.  They wish to be treated like everyone else.

Sprites choose to wear as little as possible so that their clothing does not interfere with their wings for flying. Young sprites often spend most of their time without a stitch of clothing on until they reach the age of about twenty-five. At which time they begin wearing a short skirt-like garment around their waists. This makes it difficult to differentiate between the genders until the young females start budding. At this point, they will gather flower petals from the plants for which they were named to craft a halter for covering their new buds.

Sprites celebrate life in general, however, whenever there are new sprites born it is a true revel. This has on occasion led to even more young sprites being born. News of a new birth, is spread quickly through the sprite community. Within an hour there are hundreds of sprites gathered to celebrate the newborn. The news will have spread much farther than to the ones who have been able to gather in the hour. Those gathering will bring gifts of fruit, nectar and pollen. The joy of seeing a new sprite causes many sprites to lose all inhibitions and frolic freely amongst their own kind. These celebrations have been known to last for months.

Coming of age for a sprite happens when they reach the age of one hundred to one hundred ten years. Most sprites at this time will choose between couriers  and pollinators. Those who choose to be couriers will usually find someone to attach themselves to. These are usually people of influence in the fae community or have a specific set of skills which the young sprite is wishing to learn. For the sprites who choose a person with a particular set of skills they never ask to learn them but watch and learn. If the offer is extended to teach the sprite they will jump at the chance.

Sprites have an understanding of death though they do not like to dwell on it. The loss of a sprite is devastating to the community. A sprite once deceased is laid to rest in the place they found the most joy while alive. Other sprites bring flower seeds to plant on the grave and the surrounding area. When these flowers bloom sprites will find joy once again in the place of loss. This practice has caused some farmers no end of frustration as their wheat fields have quite suddenly become huge patches of flowers. Most farmers will take this into consideration when plowing the field and leave any area of about one square foot of flowers in the center of the huge flower patch. As they are aware of the importance of the sprites to the health of their fields.

Sprites find it taboo to consider there is anything wrong with having a playful attitude. They also consider the desecration of a burial site to be taboo. A taboo which when violated has resulted in the playful sprites avoiding the field and chasing off the other pollinators for many years, or until the farmer has made amends in offerings to the sprites and planting the field in flowers for at least three years.

There is a legend around the sprites as a capricious and vindictive form of fae, where they caused a blight to befall a farmer's fields while all those of his neighbours flourished. He couldn't seem to harvest any crops no matter what it was he planted for nearly a decade. Giving up, he let the field go fallow for three years during that time it became covered in all sorts of wildflowers from far away.

Sprites find beauty in almost everything, from the rising of the sun to the dew glistening on the grass. They take joy in silks and satins.

Sprites have no real gender ideals. Anyone can do anything. Their opinion is if it is enjoyable for someone then it is good for them to do.

Sprites, like corvids will gift shiny items to the one they are interested in. This can be anything from small gemstones to small silver buttons. Sprites have a tendency to organize them by gifter in a secret place.

For most sprites, a relationship lasts only as long as all members of the relationship desire it too. Sprites seem to flit from one relationship to another with nary a thought. For those who are not fae and in a relationship with a sprite, will often feel betrayed when the sprite runs off with someone else. There has been rumour of sprites pining after a member of another species for decades as the one desired was already in a relationship or unable to recognize the sprite's advances.
Corrigenda    Fae    Fae Wildlands      Fae      Sprite
Encompassed species

Sprites have diaphanous wings with coloured veins, similar to those of a butterfly in shape.

Sprites average in height from four to six inches tall. Male sprites being on average the shorter of the genders.

Sprites average weight is between twelve and twenty-six ounces

Sprites have bright eyes and button noses. Their eyes contain an inner lid which they can close when flying to protect the eyes from fine dust particles, and pollen.

Sprites have very sharp hearing.  This allows them to hear things up to two miles away making them great couriers since they don't have to actually travel far to pass along a message.  This means even if they have chosen to be pollinators and not couriers they will still pass along messages for the couriers.

Sprites unlike some fae only have one child at a time.  This is a good thing since they are almost constantly fertile.  From impregnation to birth is only two months for the sprites.   Sprites have the ability to grow to four feet in height to mate with other members of the sapient species of Corrigenda.  Sprites are rather promiscuous, and so if they do become enlarged for mating reasons will take as much pleasure as they can for the time they have.
Header picture by anaterate from pixabay.com

I love the detailed approach in this article. There's just everything one needs to know about Sprites in your world)   Also kinda reminded me about Carnival Row tv series a little ;) One thing that might be a bit puzzling is the male names. English isn't my first language, so I might be wrong, but I feel like that parts of a plant might end up to be quite a limited list for names)

They can but there are ways to expand as well. And thanks I appreciate the feedback

I like the ability of the sprites to grow temporarily in order to court other species. That's very interesting. :D