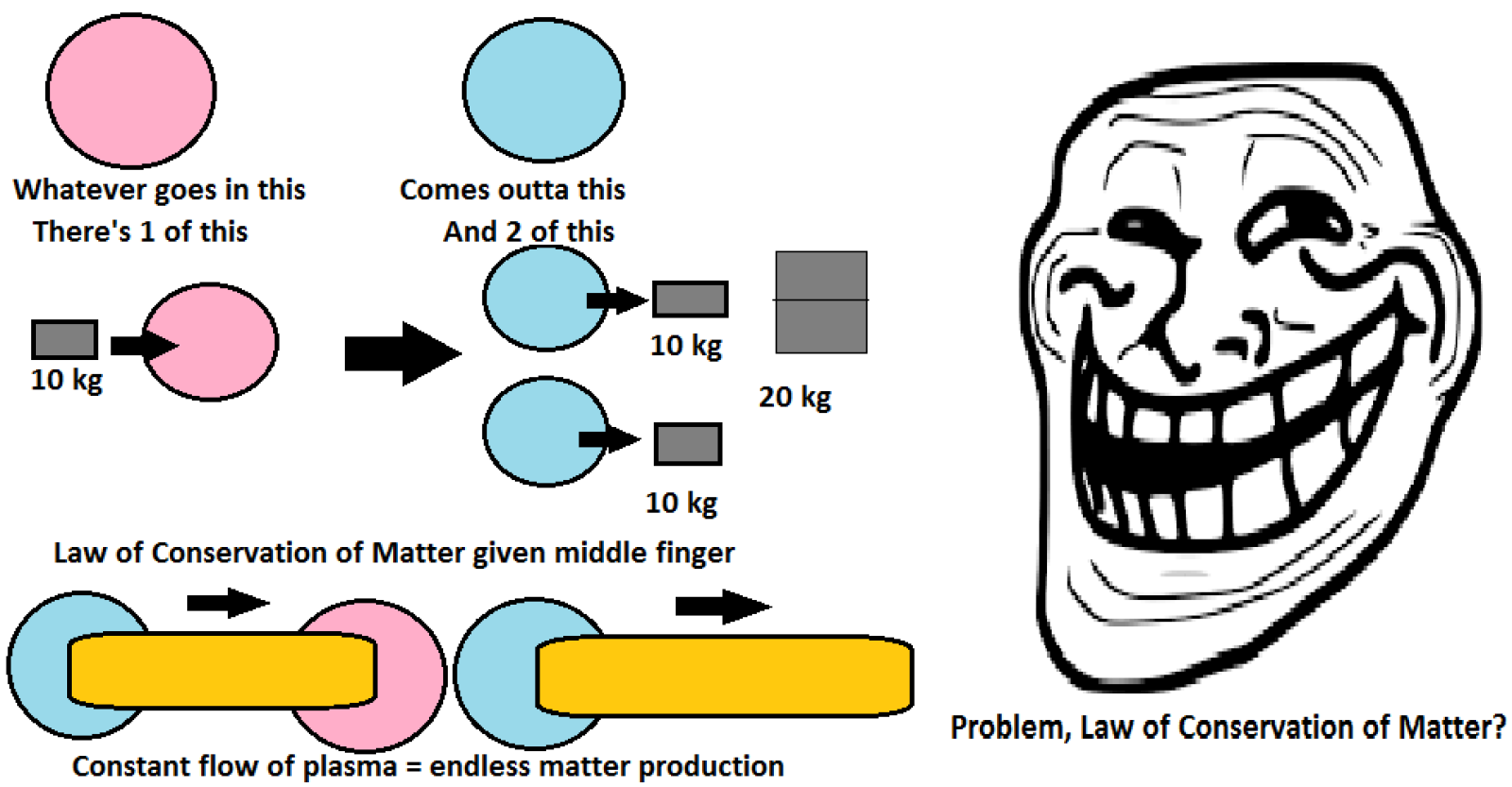 Matter Duplication is the means by which the CHG acquires the matter it needs to build planets, have massive warships and so on despite the difficulties it faces with expanding (the LIR one way, Old One remnants and other hazards the other, plus the ways in which the CHG limits itself for the sake of avoiding rebellion and the insistence of those who run it). All matter duplication requires exotic matter - which pushes away and is pushed away by regular matter in a sort of reverse gravity - and essentially works by making 2 out-portals that are linked to the same in-portal. ALL the matter duplication is done in the Infinity Base - named for how it's a source of infinite middle fingers to the laws of physics - whether it's being done for maxing out of that matter production or being done experimentally to find more productive ways to go about maxing out on the matter production.

The CHG gives 1/12 of all the matter produced to the main military, which uses it in all sorts of ways from creating massive warships to secret facilities to massive weapon stashes to hordes of sleeping robots waiting to be activated when they are needed most and so on and on, whereas the other 11/12 of it goes into the building of planets, space stations, biospheres and domes, non-military-but-still-super-secret stuff and so on - especially that first one. It's suspected that the Old Ones had technology like this in the past but it would appear that this was either underused, only used in the so-far unexplored ruins of their empire or used solely for the super-weapons they were apparently quite fond of building - either way it's unlikely that any of their remnants have the technology today.

Well the first thing is getting your hands on some exotic matter - which isn't easy as the stuff fundamentally moves away from sources of gravity and so most out it is probably among the stars causing the increasing rate of the Universe's expansion - which is why it's so much easier to just send in special forces to steal it from other space empires that have managed to grab a few scraps of it. The LIR is an ideal target due to its large territory - allowing it more chance to find the stuff in its borders - and the general incompetence of those working in its secret facilities - making it easy to steal.
Parent Technologies
Children Technologies
Inventor(s)
Jeff the insanely intelligent AI
Access & Availability
The method by which this is done is kept secret by the CHG government - the only known entity to possess the technology - from the populace. All the populace really knows is that the government does have a method of breaking the Law of the Conservation of Matter, that the government actively uses it, that there is some kind of limit to how much they can use it (otherwise there'd be way more stuff) and the rest is really just speculation.
Complexity
Bruh. Let me reaffirm that a city-sized computer needed 17 years to figure this out.
Discovery
After 17 years of constant thinking, using models and the help of other advanced AIs, Jeff the superintelligent AI - who is basically a highly space-efficient computer the size of a city - finally figured out how to do it.
Related Materials

Answering: "Describe a major technological breakthrough and the impact it had in your world."
Visit Dr Jimothy's Competition Page Check all other answers to this prompt Competition Homepage