Small humanoids with insect (frequently butterfly, sometimes dragonfly) wings and antenae or small thin horns. They produce a glittering dust or powder.
The fairies live in small tribes. They sing, dance, eat and generally have few cares.
Dress is simple and typically drawn from leaves, bark or mushroom skin leather. They engage in body, clothing and item decoration with painted designs. They like bright colors. Figure representation is simple stick or outline shapes. Fairies have little concept of ownership or possession - carrying or wearing everything that is theirs. Anything found unassociated with someone is free to the finder. Actual nests or habitations have owners but not land or trees, plants, waters or creatures.

Fairy will do small favors to those who do nice things to them and engage in vandalism and revenge on those who do them ill. Mostly.

Fairies have an affliction called "Urusig". This comes from eating vertebrate meat. It causes loss of Clarity/ Reason (not that Fairy possess much reason to start with). This causes them to become increasingly bulky and aggressive and becomes an addiction with a slide of decreasing light and increased violence and hunger.
The first meat eating causes them to become dizzy and light headed, all attributes boosted just a point, except Clarity- which drops. If wounded, they heal. This condition lasts several hours per bite. Fairy manage 2 bites/ hr.
If a Fairy remains "sick' with Urusig for a day they become Feral. Meat withdrawls wrack them with pains and shakes draining vitality and accuracy. If they can spend a day without meat, with may recover. Honey and sweets help.
If they spend a second day with eating meat, they become Hunter/ Savage. They would rather hunt than sing and dance, or they sing about blood and killing in high pitched buzzing songs. They take on more masculine or feminine appearance. They will make or find or trade for weapons. It takes a week without meat for a fairy to recover from the Savage state.
A third day eating meat or any eating fairy flesh causes them to become Hardcore/ Rabid. The muscles and body are big and bulked, they are exaggeratedly male/ female in build, claws sprout from fingers and the tooth plates are jagged. They push at the very upper limits of fairy physical status and abilities. They become focused on hunting and eating with a few bones on hand to chew and suck the marrow from. They may dance in victory. Sing about killing and eating. The Rabid may keep a troop, feeding them from kills or even offering a point of blood. With a troop they may take down bigger prey and massacre more peaceful wild fairies.
A single fairy in danger of it's life may bite itself for 1 point and become Rabid and maxing all abilities. If it can be controlled/ contained for 1 month it will revert to wild type again.

Anthromorphic creatures no taller than 23 cm ( or about 9 inches). They have humanoid shape with 2 arms and 2 legs. The head has small horns or antenae. They possess wings which are frequently brightly colored and similar to dragonfly or butterfly wings. The wings are ethereal- solid to the fairy but of no substance to other creatures. They are thin and lithe, androgynous, tending toward human feminine look and lack genitals or anus. The body is covered in a fine dust or powder that is constantly shed and sparkles. The fairy doen't walk- they half fly/ float in frolics, skipping and scampering. They dance and pounce, jump and leap. They may fly to any altitude but typically stay within 1 meter of the ground.
Fairy have just a single upper and lower tooth plate. Behind this is a long pointed tongue which can be used to lick eyes and ears. The ears are long tapered points that may stand up, stand outward or very rarely, droop.

Fairy hatch from pods or galls that grow on plants. These are formed by fairy wrassling and combining their dust.

Fairy hatch out at 1-2 cm high.  They will eat pollen, honey, berries, milk or eggs and will reach full size in just a few days.

There are sylvan, urban, wild and garden dwelling fairy.

Fairies eat pollens, berries, fruits, nectars and saps, milk and eggs. They will eat insects without apparent ill effect. Sweets and honey as well as ales and alcohols are favorites. Fairies drink alcohol as if human sized and to the same effect of intoxication. Cooked meats do not produce Urusig but are also undesirable unless heavily spiced, buttered and honeyed. Dried and salted meats do produce Urusig.
Fairy do not urinate or defecate. They only produce Dust and occasionally vomit up a pellet several inches long (5-6cm) of undigested hair, bone, insect shell, woody material and the small stones that they eat to aid digestion.

Rabid and Savage Fairy will have a heirarchy under the biggest baddest fairy. Otherwise Fairy have no social structure - they gather for companionship and protection from larger or more threatening creatures. They will be recognized as outstanding artists and painters, musicians, story tellers, harvesters, clothing makers, singers, dancers and jokers. Fairy also enjoy engaging in wrasslin which may devolve into brawls as a whole troop jumps into a wrestling match. This is as much sport as spawning and will typically produce a crop of pods. Even Savage and Rabid Fairy may engage in wrasslin, and spawning. The pods are normal, but the tribe will likely wait the several days incubation to harvest and eat the new hatchlings.

A steady diet of sweets and protection along with small gifts may encourage fairies to stay in a location. Things like "missions" or "jobs" mean nothing to them and they are fairly useless, though gardeners like them to pollenate plants and keep insect pests under control.

Fairy Dust is a useful magical ingredient. Less known is the effect of fairy flesh ingestion, which boosts physical characteristics and abilities while draining wits and clarity. Users become increasingly violent and hostile to anything that resists their will or desires.  Use also causes the eyes to glow yellow or orange.

Fairy speak their own language and may mime or gesture to communicate with other  beings.  They reason about as well as small children.

Fairy have general senses similar to humans, elves and fae- with dark vision and a magic intensity sense.

Names are simple natural things or descriptors - Moon thistle, Bright wing, Sunbeam, Leaf dancer.  There are no genders, so no gender associations.

Flowers, dyes, stains, paints, patterns and colors. Feathers in attractive colors.  More is better. Except the Rabid, who tend towards black, brown, grey. They decorate with bones and spikes/ thorns.

You sing and dance and tell stories. You gather good things to eat and drink that you share with the tribe. You play music and listen to others. More dancing and maybe wrasslin.  You listen to the birds and bugs. You bask in sun and moonlight. You chase tufts and seed pods blowing in the wind. You do whatever seems fun and entertaining.

Fairy technical skills are stone age. They indulge in almost no tool making, don't use fire and have no written language.  They make things of leaf, wood, stone and sometimes found items or skins. They do have wood wind, drum  and insect-part vibrating instruments and play musics. They may make crude shelters of sticks, branches and leaves or occupy a hollow in a tree, of empty bee or wasp nests, a burrow or cave.
They will make weapons by sticking small animal claws, teeth and toes to their fingers and limbs.  They use bone wood and stone for clubs, maces and hammers. They make make a simple bow and stone tip arrows or stone adze weapons.  They will trade Brownies for crafted weapons at rates measured in the hundred weight of honey or 10 times that in sweet grass.

Fairy have one of three forms of magical abilities: Sweet, Mean and Thrall. So long as they have essence they may perform their magics upto twice per round - once at the start and once at the end. The only other thing they can do is move. Invoking magics cause a burst of Dust and sparkling.
Thrall causes the fairy to fall into a coma while in use as it occupies, controls and inhabits an animal upto cow/ horse sized ( at high rank. Generally 1ft of body size per rank). The animal will be under complete control. If the fairy is hurt, awakened or releases control the animal is free and reverts to either fight or flight. An animal that reverts to fighting after Thrall has "tags" that any fairy may manipulate for 1d6 rounds before they fade away - pushing behavior or targets of attacks. Total majority of tag pulls dictates action.


Gust of Wind: This can push back a fairy to hold them in place for 1 round or double their movement for 1 round.
Shimmer: The dust shines and twinkles causing the fairy to be difficult to see and provides magical protection against attack. A fairy may apply it to another. It lasts 1 round.
Focus: Boosts the target's clarity and wits for 1 round.
Kiss: a physical or blown kiss that heals a single point of wound.


Gust of wind: doubles or negates fairy movement for 1 round. The wind strength is about ** or 30 mph.
Thorn: a spike of thorn will stab for 1 pt ignoring armors.
Binding: Unless magically resisted the target can't move or take actions except speak for 1 round following activation.
Berry Burst: causes increased damage as more essence is added from rank 1 to 5. Causes the target to be engulfed in an explosion of force like a squished berry. This can tear off limbs or destroy a body. Meat eating fairy don't like to use this except in extremis because it ruins the meat. 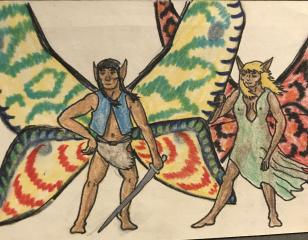 Consuming fairy flesh is a thing? Yikes. D: This is a really interesting article about them. The bit about what happens if they eat meat is fascinating.