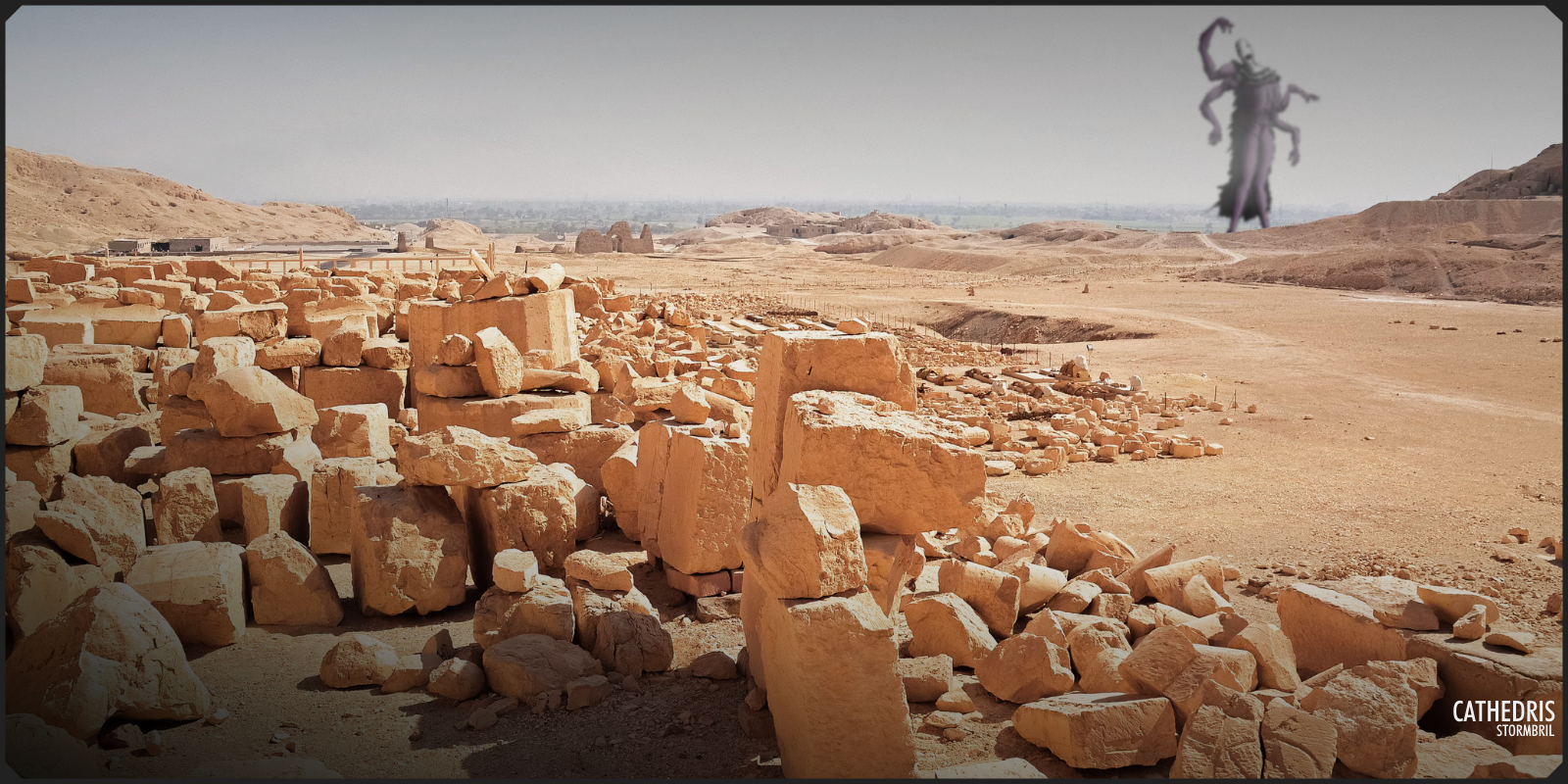 Decayed Foundations of an Ancient Village

These ruins show clear indication that their destruction was the work of Xiuthan. All that remain are truncated foundations -- everything above a certain point has been eaten away by the decay that Xiuthan was capable of unleashing.
Readers
click
tap
here for bonus info

Procurement Officer of Barklow's Books
It's thought that during The Seven Day War, in a panicked act of self defence, Xiuthan demolished hundreds of villages like this one.   The resulting destruction would become known as the Kazcallen Desolation Plains, and would not be settled again until thousands of years later.
— Ash Barklow

Found in a harsh, barren landscape within Kazcallen, these ruins are just one of many within a massive zone of desolation. Almost all top soil and signs of life in this region were scraped bare, decayed down to almost nothing, when it saw near total destruction during The Seven Day War. At this site, just like many others, all that remains are stone foundations of buildings, buried and protected from the elements by a shallow layer of sand over many years following the war.

In the initial stages of the Kazcallen Revitalization Project, where rivers are rerouted and vegitation is reseeded to promote life, many numbers of ruins were found. The location had been too barren to truly explore in great depth before modern times, and so when humanity finally began combing through the massive barren landscape, it only took a short amount of time before discoveries were made.   This site in particular was the third site to be found. It was buried under a mere 2' of loose packed sand, and was found accidently as explorers chose the site at random to pitch their tents for the night. Upon driving a stake into the ground, the foundations were hit, and the ancient ruined settlement began to be uncovered that very night.

While the name of this settlement is yet to be discovered, its proximity to Xiuthan's favored grounds likely means it would follow the naming conventions of other nearby Xiuthan worshipping settlements.   These often used permutations of Xiuthan's name, such as Xiunat, Tixuan, Xiux, or Nixunan -- names of other nearby ruins recently discovered within the Desolation Plains.

This ties in so well, I appreciate all the context we're given. It works well considering that it's representational of many such ruins. It's also really nice to see people reclaiming the areas that were devastated by the Godhusks.

Thank you! :D I feel like this little series of ruins articles might make a nice springboard to eventually write about the Revitalization project in general, too

Sweet and short - well written but ... OMG the BONUS INFO was ssoooooo cool!

Thank you Dimi!   I'm testing it out in a few small ways before writing the chararacter's (Ash's) actual character article, and then I'll be making a patreon and using the bonus info box as a method of serving exclusive patreon content :D