Veil Trees are a species of medium sized tree on the planet Collena, native to the warm oceanic and continental climates of Eastern Varefia. Veil trees are named by their very long leaves and flowers, almost enitrely covering the tree in all directions. They are actually part of the genus Neria, Sphere or Puffball trees, so named because their leaves, flowers, and seeds all grow in a half or full spherical pattern.
Veil trees are a keystone species of their environment, providing food for animals large and small, and even influencing the habits of apex predators like Chirodans. The Regalti themselves have been cultivating veil trees for thousands of years, using nearly every part of the tree for food and building.
Classification
Clade:
Order
Family:
Genus:
Species:

Geographic Distribution: Warm Oceanic and Warm Continental climates of the northern hemisphere. Often found near water. Native to Eastern Varefia.
(Note that scientific classification terms used here are in the Regalti's own language.)

Veil Trees are a medium size tree that often grows to an average height of 25m. They have wide spanning crowns that can be as wide as the tree is tall. They have dense root systems that prevent the growth of competing tree species, and their leaves cover the ground in shade, often allowing only grasses to grow near them. Veil Trees can take forty or more years to fully mature and flower for the first time. They also have rather short lives, never living longer than 100 years or so, though some specimens have been carefully protected by Regalti and are easily over a thousand.
The tree can grow multiple trunks depending on the sub species. It has a wide flared base for storing large amounts of water and sugar. Its bark is a silvery gray and is rather thin but heals fast.

Veil trees grow their leaves in a half spherical pattern, sprouting 10-50 leaves out of an enlarged area at the end of the stem. The amount of leaves heavily depends on sub species. Smaller leaves may grow out of the stem before the end point. While most sphere trees with the half sphere leaf pattern point straight upwards, veil trees are pointed to the side, allowing the leaves to cascade down as they grow in length. New leaves start out growing red or purple. Sunward side will finish growing in a turquoise color while the underside of the leaves will appear more green.
The leaves have different lengths depending on how far away from the center of the tree it is, which also determines how much sunlight individual leaves get. Near the center of the tree, the leaves are short and may even look like puffs of grass growing out of the stems. Near the edges, the leaves are over a meter long or longer and form a sort of shell around the rest of the tree. 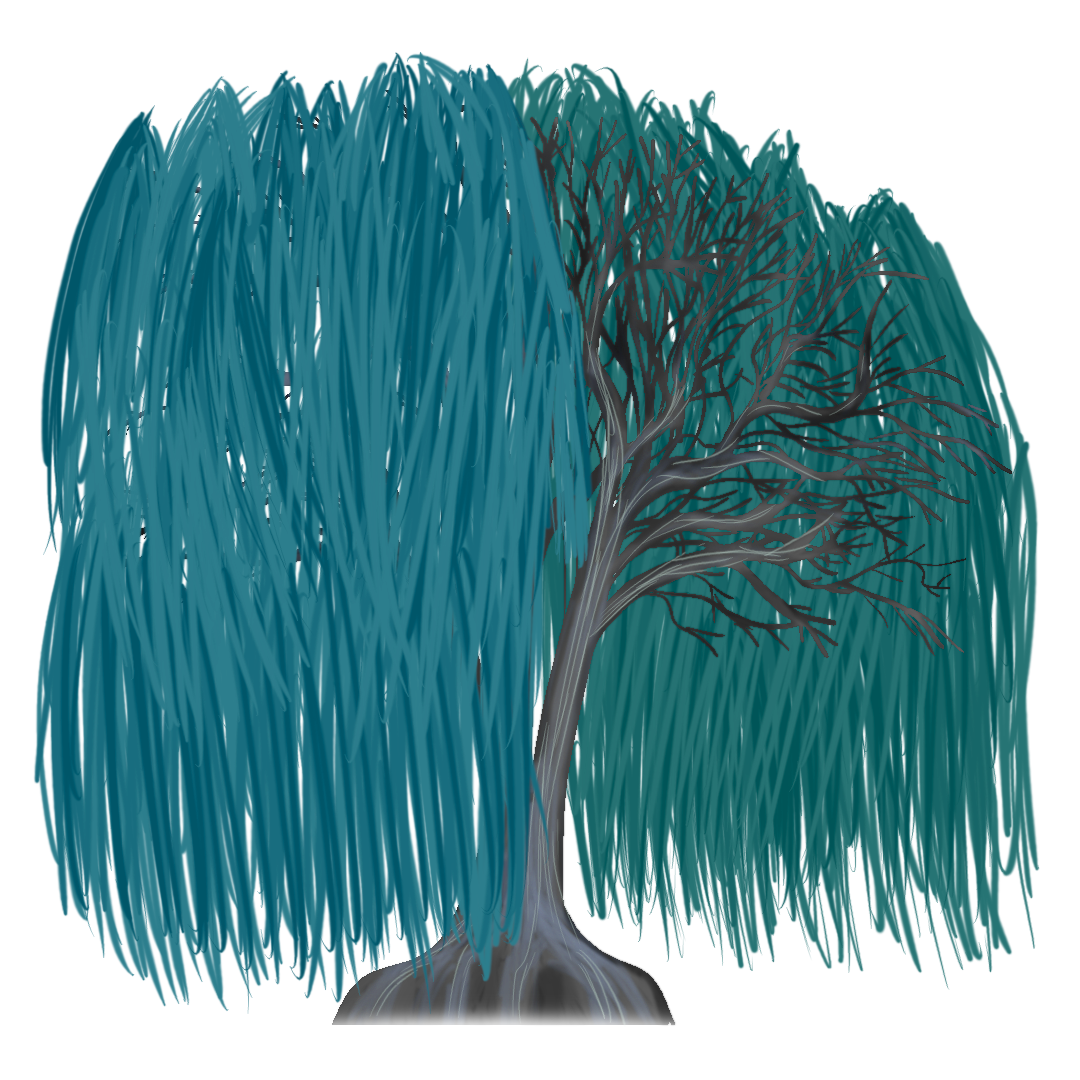 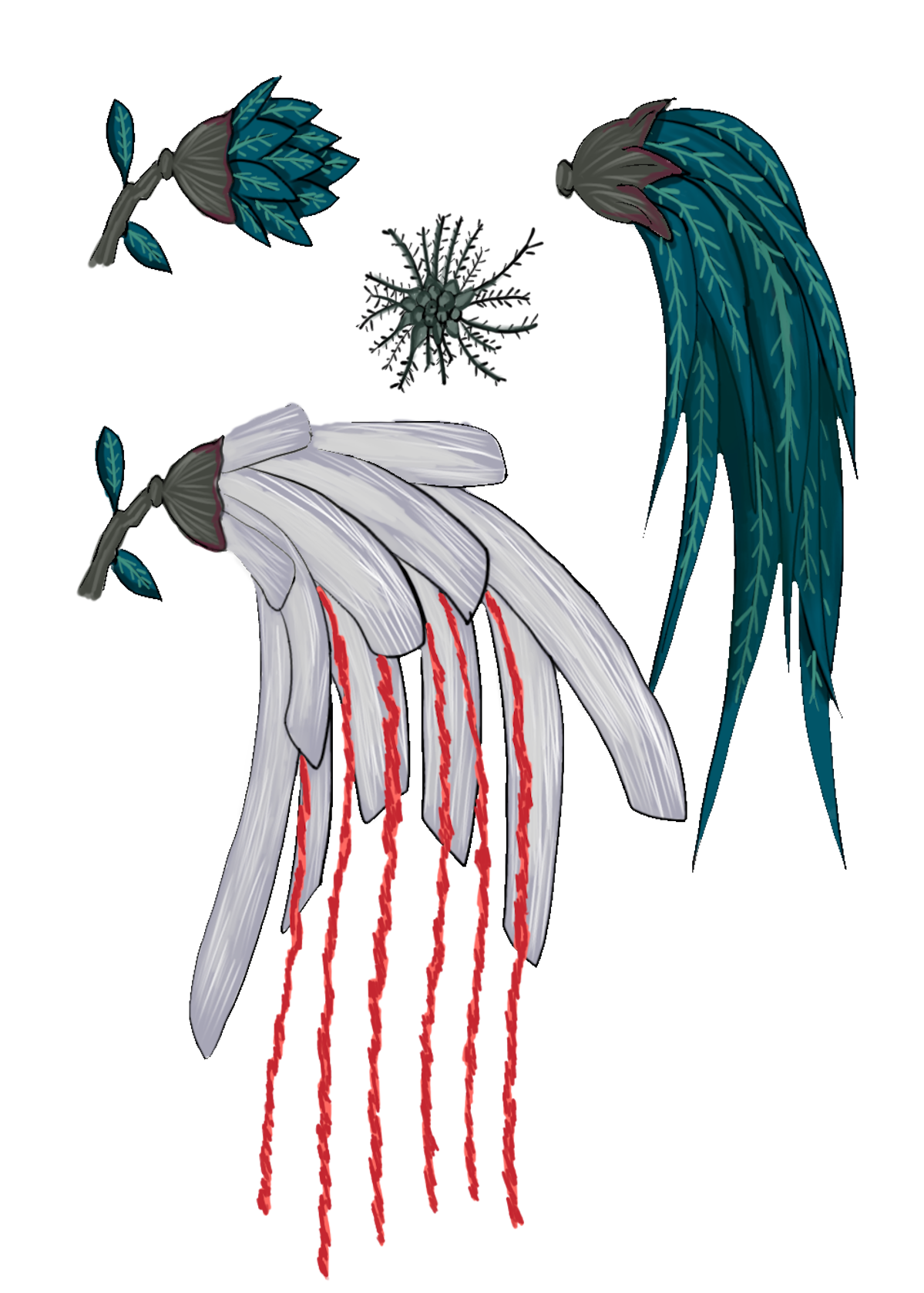 Veil trees have been cultivated to have nearly every possible color flower, but naturally occur as white or yellow. The petals of the flower are extremely long like the leaves. Male flowers will have equally long stamen, with dozens of pollen producing anthers sprouting along the full length. Female flowers have a rather long pistil, with mutiple openings to accept pollen. Male flowers will immediately wilt away upon producing enough pollen. Female flowers will instead shrink, pulling itself much closer to the stem where it starts to grow seeds.
Veil tree pollen spreads in all of the most common ways. It can be spread by especially strong winds. It can be spread by insects. The tree also provides cover for migratory Kiurnal who fly low to the ground in and out of the tree's leaves to avoid detection from predators. These animals pick up the pollen and quickly spread it from tree to tree.

The only structure of a veil tree that is arranged in a full sphere pattern. The seeds are spread by wind normally. While other species of Sphere trees will sometimes develope a thin outer shell around the seeds to prevent them from dispersing early, veil trees do not have this development. Sphere trees do not grow fruit either.

Veil tree sap has large amounts of sugar and Malic acid in it, with traces of various other acids and compounds, including a plant-based bioequivelant to melatonin, making creatures that consume it become tired. It can also sometimes be mildly poisonous, containing peroxides, but this only occurs on trees that are attacked by insects and fungi.

Veil trees aren't as vulnerable to insects as other trees of Collena, but they can still be attacked. The tree is also vulnerable to worms. When the tree's immune system senses an infestation and it can't be controlled by any other means, it will change the way it produces its sap, changing it into a weak and bitter poison. This immediately kills most living things inside the tree, including its own immune system. This will leave the tree in a weakened state for up to a year. It has to purge its now poisonous sap, which stunts the growth of its leaves and flowers.

Other than its sap defense, Veil trees do not produce much in the way of anti-microbial compounds. Most plants on Collena have little built in microbe defenses. This has allowed plants there to evolve a symbiotic relationship with phagocytic microbes that act as its immune system.
Known as Chlorophages, they act very much like the immune system in animals. Like how animal immune systems have different cells performing different roles, different species of chlorophages will act in different roles. Some species specialize in killing bacteria, others can fight viruses and cancererous plant cells. Some will even produce anti-bacterial and anti-fungal compounds of its own which will aid others. Some will leave spores on a plant's sees, giving saplings some immunity. The rest will be acquired by the tree through its life.
Despite its microbiome acting as an immune sytem, It can get a wide range of bacterial and fungal infections that directly attack the tree's bark, leaves, and roots. These infections can cause the tree to shrivel up as well as stop growing leaves and flowers. If the infection is severe enough, the tree will produce ever larger amounts of poison in its sap, which will kill all chlorophages in its system. The chlorophages will leave poison resistant spores to regrow after the sap is purged, but If the infection is severe enough, the tree and the entire system it supports will die.

(Placeholder area for image of veil tree immune system. I'm working on it)

(Placeholder area for image of Kesmodon. I'm working on it. Think of them as large mammals with the body of a hyena and the head of a bat)

It takes a large amount of energy to grow meters long leaves and flowers that are usually eaten or at least touched by passing animals. While it does guarantee its pollen is spread around, veil trees grow this way for another purpose, and that is because it has thin bark and it needs to prevent animals from discovering its sap. It is believed that this is why veil trees evolved long leaves and flowers to encourage herbivores to eat that instead, but often passing Ikandis will unwittingly peck at the bark and gain access to the sap underneath.
Veil trees evolved two related defenses if this happens. First, the sap will make herbivores fall asleep under the tree. Second, the sap's smell will attract chirodans of all sizes, including the biggest one of all, the Greater Kesmodon. If the intruders are not yet asleep, they will immediately flee at the sight of a Kesmodon. If they are asleep, the Kesmodon will attack and often get a free meal. Regardless of how it happens, once the herbivores have fled or are killed, the Kesmodon will drink its fill of sap, then fall asleep under the tree. To veil trees, this is a good trade as the presence of a large predator alone keeps other animals away, giving the veil tree valuable time to heals its bark.

The Regalti have been taking advantage of Veil trees for thousands of years. The Regalti use the Sap for drinks and alcohol, and raw sugar. They used to use the leaves and flower petals for weaving They still use the wood to make ceremonial weapons, musical instruments, and furniture. The wood is too weak to make buildings out of.
They may even be how Regalti originally domesticated Kesmodons. It is believed that early Regalti would open up the tree's root base, gaining access to the sap. They would then fall asleep. while a Kesmodon would wander by, attracted by the smell of the sap. They almost never attack a Regalti, as they were aware of how dangerous they were. Usually they run away on sight, but the sweet smell of veil tree sap kept them there longer than they would like. They would instead drink their fill of sap, and likely fall asleep themselves. It isn't known how domestication started, or how the two species saw it as more benficial to tolerate each other, but it has led to a relationship stretching many thousands of years, and might even rival the bond humans share with dogs.

The Regalti have a number of uses for veil tree sap. Regalti prefer to boil it and refine it into a thick concentrated syrup to mix with other foods. They will mix this syrup with water to make flavored drinks, and they will refine the syrup further to make alcohol. Regalti have consumed raw sap for thousands of years as a sleep aid. The mildly poisonous versions of the sap can be used as an anti-septic, and can be applied directly to wounds.

In earlier ages, Regalti would use leaves and flowers as clothing, weaving it into various patterns. Early Regalti would also dry the leaves, use resin from other trees to stiffen them, then weave baskets and other objects. In modern times, regalti still wear flowers in their feathers, and also use them for several different religious ceremonies.

Veilwood can conduct sound well, and has been used for hundreds of years to make several different musical instruments, resembling those you would find on pretty much any planet with an intelligent species, including flutes and violins.

Regalti have taken advantage of the distinct wood pattern of veilwood to make broad bladed swords for centuries. Regalti train in several different martial arts with them, especially Fevarik Regalti. They are not used as a combat weapon, but are strong enough to be used in defense. Early Reglati may have used them in combat and there are stories of heroes that have only used wooden weapons made of veilwood
One of the tasks for becoming an accepted member of the Kedon is to have the discipline to craft your own sword, which requires carefully selecting the right type of wood, and then preparing it and carving it correctly. A proven sword will withstand the strike of a test rod made of a soft metal like copper, and wont even get a dent. A member of the Fiare Kadon will carry their sword for the rest of their lives, and on death, the sword is cremated with the person.
If you liked reading an article on this world, leave a like. If you didn't like an article, leave a comment explaining why so I can improve as a writer. If you interact with an article on my world I will interact with an article on your world.