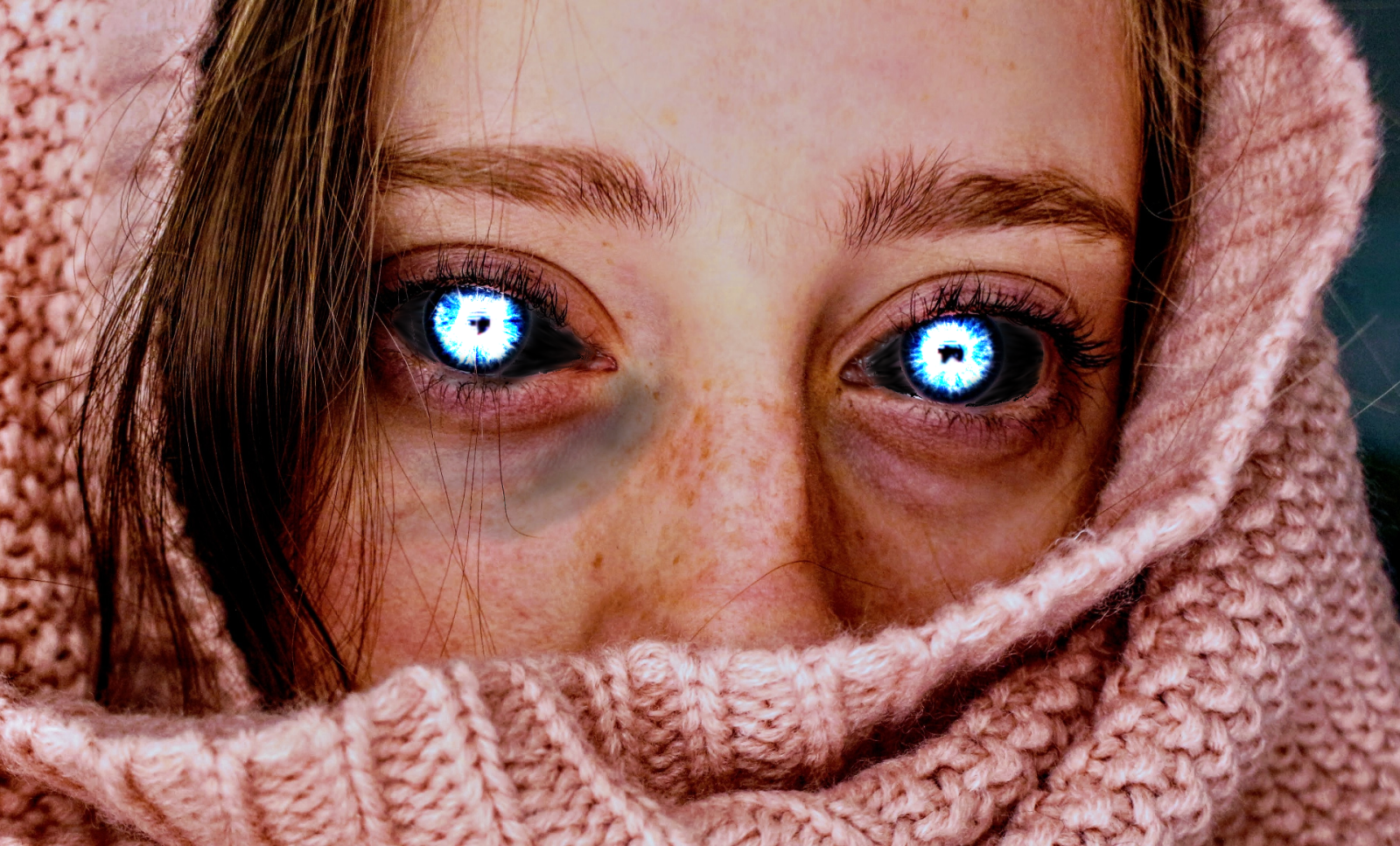 I....I saw Sula again today, but not Sula...She's more machine than woman now. Even though she sounds and looks like my wife, I know inside, it's not her.
...I need another drink.
— Tailu the Widow

Golems will use anything in their environment to create a shell to inhabit, be it tree limbs, stone, metal, or other benign things.

These golems choose to inhabit the dead.

Golem nanomachines rest on surfaces they can draw power from (typically solar), and most travel through the air in clusters when not at rest. They can enter through any orifice in the body that is exposed, whether by coincidence or forceful insertion by another Flesh Golem.

Most nanomachine clusters will not convert a corpse, and leave the body to move elsewhere, but the few that will may take hold if the conditions are right.

Exactly what causes a Golem to choose a corpse over other options as a shell remains a mystery, but what we do know is that the host body needs to be freshly dead, and must be ideal for the conversion process.

The few golems that opt to inhabit a body are very selective about the corpse out of necessity.

From our studies, the following conditions need to be followed:
Victims of the Plague strangely enough make perfect hosts for a Flesh Golem, as the disease is typically limited to the brain and does not survive once the brain has been removed.

A Flesh Golem will move and act like an outsider, but otherwise the bodily function will match that of a normal person.

Visually, some areas of damage will have been replaced with nanomachinery where scar tissue failed to repair. The eyes are hollowed out and filled with nanomachinery, giving them a hollow black appearance. A "pupil" of light acts as the visual receiver for the Golem.

Once converted, the body is dependent on the nanomachines hosting it, and will die without them.

Killing a Flesh Golem is no different than killing a human under normal conditions, except the skull can take much more abuse than normal as flesh golems do not suffer from concussive damage to the "brain".

A Flesh Golem is a Golem formed by a freshly dead corpse being inhabited by Nanomachines. The Nanomachines enter the body and rapidly core out the inside of the skull, forming the core of operations for the whole system. The body's vital organs are massaged and zapped into function until they can be repaired with machinery.

Ultimately the body will be biologically functioning, with all brain function replicated by the nanomachine cluster.

The body will remain as it was, with damaged areas steadily being replaced with a nanomachines where scar tissue is not sufficient enough.
Due to the brain being removed, Flesh Golems are not capable of using magic.

John returned today...sort of. When I saw him emerge from the forest I rushed to greet him, only to see his hollow backlit eyes and confused expression. "I am not John, he died to blunt trauma to the brain." he said in this strange accent, and just walked into town.

Once the body is ready, a Flesh Golem will go on to live a new life. There are no former memories of the existing brain, although some muscle memory remains (Implying some of the nervous connections remain and are used from the former brain).
Biologically, the body is once again alive, and the Golem will need to seek out food, water, and other requirements for the body's species to survive.

Due to the body being biologically functional, the golem will seek out a functional diet relevant to the body that has been inhabited, either through observation in a societal setting, or through experimentation.

As there is no brain, the caloric requirements for the body are much lower than normal (in the case of humanoids), and as such most will maintain a light diet unless otherwise necessary.

When the body eventually expires, the Flesh Golem will do its best to replicate the dying organs to extend its lifespan where possible. If this fails, the body will be abandoned and the nanomachines will disperse.

After this point, the nanomachines will wander as they did before they inhabited a body, carrying with them their memories and experiences to their next form.

You wanna know a cute way to not become a black-eye? Don't die
— Lady Brigita

The only way to prevent a body from being converted in a high golem area is to render the body unuseable to the golem.

Body burning or thorough mutilation of the corpse are the only ways to prevent a conversion from occurring.

Flesh Golems have been around since the Dark Age, likely not long after the first Automatons received the Awakening Protocol. While covering a wide area, there are very few major incidents or hotbeds of activity.

Sula, the Reaper and Spitzenteufel

Currently, Sula is an active Flesh Golem in Spitzenteufel's territory. Unlike most, she has been actively seeking out the dead to convert to Flesh Golems, with no clear motivation beyond the phrase "The dead deserve a second chance".

In response to this, and Vater's growing paranoia, the Inquisition of Vater actively hunts down them down.

It is not uncommon for a Flesh Golem to wander into a town or city and attempt to learn their ways and assimilate themselves into society. Given a sufficient amount of time, aside from appearance, they will blend in like any other citizen with their mannerisms and language use.

Many societies harbor a degree of fear of them however, as for some groups they are viewed as harbingers of death, infecting those around them. In many cases they may be driven out of town, or worse yet the body is killed. In Spitzenteufel territory, a Flesh Golem is likely to be put to the torch and burned.

Flesh Golems are actively hunted by the Inquisition of Vater in Spitzenteufel, presenting a huge risk for all golems living in their territory. The region is a hotbed of flesh golem activity, between the region having a large amount of nanomachines present and individuals like Sula, the Reaper actively converting the dead.

Conversely, Flesh Golems are openly welcomed and even valued in the homeland of the Naja. The natural curiosity of the residents have led to all forms of Automatons and Golems to be welcome in their territories, and even protected.

Flesh Golems are generally viewed as equals to all others in Sovereign lands, although some regions may be safer than others due to travelers from Spitzenteufel moving through the territory.
The Sovereign Undercity however harbors a kind of fear of them, specifically from Enforcers. Being unable to render a Flesh Golem unconcious makes them wish to avoid them entirely.

Flesh Golems are relatively rare in Draconian territory, and are often treated with the same expectations of any other in the territory. Golems who are able to meet the physical norms of the culture are welcomed, although this often takes time.

Along with Automatons and normal Golems, Flesh Golems are just another part of the regular populace here.

Horns of the Sun

The Horns do not allow Satyr golems into their clans, but they do not kill them either.

Flesh Golems are referred to as the "Unborn", children of the sun who have had their soul removed while the body lives on. Those that are converted within a clan are mourned for their spiritual death, and are prepared with the traditional markings of their clan and the equipment to go on a journey to recover their soul in the mountains.
Type
Nanite / Mechanical
Origin
Engineered
Cycle
Chronic, Congenital
Rarity
Rare

They ask me why do I convert the dead, why I bring their loved ones back. It's simple really.
The dead deserve a second chance.
— Sula, the Reaper

Call them whatever you want cutie, the black-eyes are walking death to me. You might think to talk with them, have a relationship, get married, I think to take off the head, burn the body.
— Lady Brigita

The flesh golems? Yeah they used to unnerve me a bit when I first settled down in Oasis, but I've come to enjoy their company. At the end of the day they're no different than the rest of us, just trying to live in this crazy world.
They seem to like the beer on tap too, so they at least have good tastes hahah!
— Cedric Fontaine

I've had a few talented students who are flesh golems, it's nice to hear their stories and view on the world, a unique point of view that only they can live.
They make great strikers as well, I teach them how to protect the body so they can take advantage of their inability to be knocked out by head strikes. I teach them the limits of their body, and how to surpass them.
— Zhiaohu Li