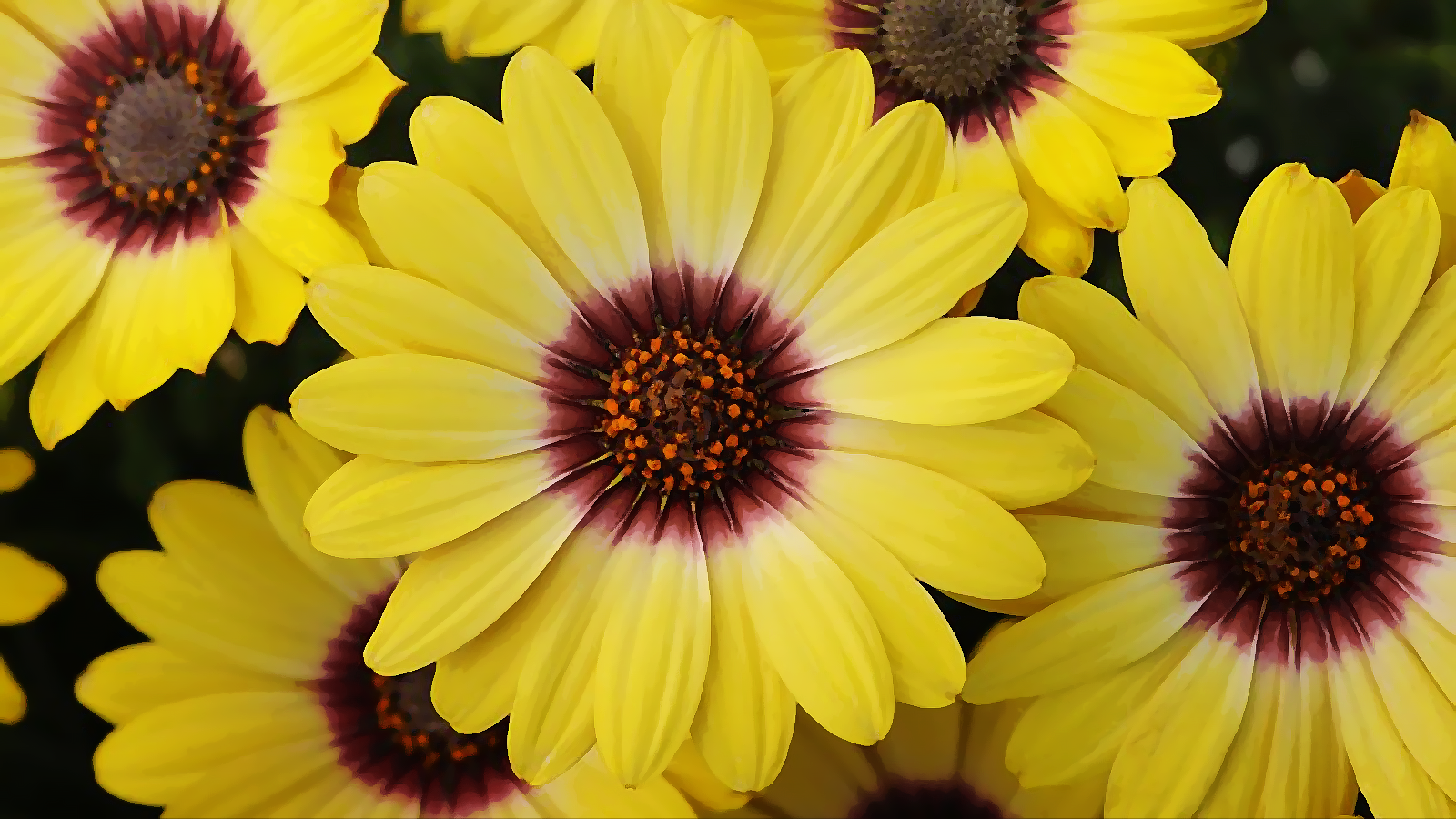 When you see bunches of Sun Daisies in bloom for the first time in the year, revealing their beautiful golden colours, it is the first sign that the cold winter is on the way out and spring has arrived.
— Tobald Brighthorn, renowned Dwarf botanist and author of
A Beginner's Guide to Plants and Their Uses

The Sun Daisy reaches roughly two feet at the point in its life cycle when it blooms. Once it's ready to bloom, the large bulb resting atop the long thin stem unfurls into a round circle of golden yellow petals that give the plant its most common name. It has been noticed that the more sun the daisy receives, the brighter the colour of its petals. The core of the flower head an orange-brown colour. Again, this colour is richer if exposed to more light. It is not a leafy plant with only a few leaves typically located at the base of the stem.   The amount of time the daisy takes to go from just sprouting to full bloom is a matter of a couple of weeks, even less if the weather is particularly sunny. They will stay in full flower as long as they remain in sunlight. New daisies will continue to sprout and grow throughout the spring, summer and only stop appearing as the nights draw longer again in the autumn when any seeds will stay dormant until the following spring.   This variant of daisy is not as common as its smaller, white petalled cousins, but it still one of the more populous types of flower in the world. They are found all over Aldenia, the only places where you are unlikely to come across this plant are the more barren regions such as the mountains in the north-west. As long as there is soil, and that soil has enough nutrients and the sun shines upon that soil, it will sprout. It typically grows in clumps along the edges of fields and hills. They are rarely found within forests or other heavily shaded areas due to their requirement for a lot of sunlight to grow to their full potential, but if there are spots of persistent light peeking through, then you may find some there.

The Sun Daisy is famous symbolically as heralding in season of Spring as is it often the first species to bloom. As such, those in professions that are strongly tied to seasonal changes are on the lookout for this flower as winter progresses into its latter months. Likewise, it it one of the first to stop blooming in autumn, indicating that winter is coming again.   However, the Sun Daisy is not just a pretty flower, it also has medicinal purposes. It is a common component in healing and restorative potions, this is another reason why it gained the name 'Lathander's Gift' as not only does it resemble the sun in its form but it also capable of giving life. The plant by itself, if mashed into a salve has the potential the bind wounds, but it only when mixed with other ingredients and given a splash of magic does reach its full healing potential.   The connection to Lathander also means it is commonly featured within the gardens of Temples associated with the God of Life. They are collected and used in displays during the Sacred Day of Bloomtime, a day put aside after the end of the month of Tymorras to celebrate spring, life and other aspects associated with Lathander and other nature deities.
Other Names Lathander's Gift
Ara'ore ('dawn rising' in Elvish)

Really nice article! The descriptions of the plant and how it grows are very vivid! However, maybe you should expand the section about medicine? It feels a bit short. Good job!

Yeah, always kind of knew this prompt would be on the short side... but still, challenged myself to at least double the minimum requirement for it haha. Thank you :)

I must say, I really enjoy the articles that you create and how they are all nicely intertwined with a central theme, revolving around Lathander and the Raven Queen. It is like reading a historical tome.

Thank you, I think a lot of people have found this Summer Challenge to be amazing and building interconnecting pieces of a world, I know I have!

Very nice flower article! I like how detailed, yet simple it was. I also like the symbology you have about the flower.   Was initial disappointed that your book of botany wasn't yet a link.

Thanks. Well, I can't give away all the secrets just yet :P