"I just want to do what I want and be happy. Is that so much to ask for?"
— Pyre Redheart

Pyre has a young and healthy semi-athletic build, common for Aristolian youths.

Pyre's sword, Shamshir, was granted to him by the Captain of the Guard shortly before leaving on his first assignment bodyguarding a Merchant's Guild Dean on their journey to Roguesport. This sword appears to possess far greater powers than its transformative abilities, potentially channeling a darker, more ancient evil.

Pyre wears a light-fitting red-orange cotton long sleeve shirt of Aristolian make and design. He also wears simple black cotton pants fitted at the ankles for quick mobility held up by a leather belt worn over the shirt and tapered to the waist. On his feet a pair of light wooden sandals from Oceos'lo'kai match up with a simple band used to tie back his hair.

Pyre is equipped with his father's sword, Shamsir, an enchanted sword capable of altering it's shape into a variety of weapons at the users will.

Pyre grew up willingly on the streets of Mandas following the mysterious disappearance and assumed murder of his father Vallar Redheart at the age of ten years old. Though the offer to reside within the estate of Arushala Ivorcoat has always been personally extended to Pyre, he has always preferred the freedom of the lower districts of the city, living amongst the urchins of the docks. It is there that the young boy leads a small band of orphans terrorizing the merchants and vendors of the Docks District, much to the chagrin of the local guards. Pyre's only saving grace is that his father was a close friend of Trade Prince Arushala, which spares him from the traditional punishments of petty larceny.

Just recently, in a serious discussion had between Trade Prince Arushala and Pyre, the young man has found employ as a bodyguard for the Merchant's Guild, protecting one of the Guild Deans on their return home to Roguesport. This is where our young hero's story begins.

Pyre has always grown up in the shadow of his father's accomplishments, having been compared to him and his heroism by individuals such as Trade Prince Arushala has always made Pyre somewhat resentful of the expectations set before him. The unexpected disappearance of his father is a vague memory to the young Pyre, but deep inside the young boy's mind, a darker truth lurks.

What Pyre lacks in manners, responsibility, and orderly conduct, he makes up for in his boyish charisma. He is always eager to lead his group of local urchin friends in various adventures throughout the many city streets of Mandas, finding trouble and adventure wherever they go. Pyre's specialty is his ability to adapt to new situations and find some way to wriggle out of his present circumstances. A broom and hanging clothesline can quickly become an escape route to avoid the local guards, and his ability to improvise seems limitless.

Pyre is easy-going and is happiest when he is relaxed; a snooze on the warm stone of the docks at midday or lounging amongst the rooftops of the Market District is where one will most likely find him. He enjoys his mischevious games of cat and mouse with captain of the guard, who has become the closest thing to a father figure that Pyre has. Pyre's heroes are the pirates, explorers, and adventurers who bring their stories into the inns and taverns of the city and on some days around sunset one can find the young man staring longingly out to the Mandas Sea with a look of wonder in his eyes.

Pyre has dreams and aspirations to be legendary pirate hero like the ones that the sailors and dock workers tell stories about in the local taverns and inns. Anything that can take him away from the boring old cat and mouse games he's become accustomed to playing with the local guards.

Pyre is very acrobatic and can skillfully traverse rooftops and buildings with ease. He is surprisingly agile and squirmy and he often manages to get through tight spots and close encounters.

Pyre is a huge fan of spicy food, he is especially fond of the several varieties of smoked and spiced meats that tokage vendors sell in the marketplace. Sometimes his gusto overwhelms his tastebuds and his taste for such spiciness proves to be his downfall.

Pyre may be a notorious street urchin, but his sense of leadership and ability to get others to follow him has proven to be a valuable asset. He ultimately wants to do what is good for everybody, and hopes that he can help his friends find the same kind of peace of mind that he pursues.

For all his gung ho and aspirations, Pyre often lacks the dedication to an idea for it to take hold as a solid objective for too long before he distractedly moves on to the next thing. Pyre's attention is short and he often moves from thing to thing without much attentiveness.

Pyre has a close yet begrudging friendship with Trade Prince Arushala Ivorcoat, he does their best to morally guide Pyre in their free time while simultaneously architecting the growth of the city of Mandas. Of course, this leaves little time for such structured guidance, and Pyre's shenanigans typically come under the scrutiny of the Captain of the Guard, a surrogate father figure to him.

Pyre has little but vague memories of his parents, and a simple life within the walls of their home in the upper districts of Mandas. Pyre is supposedly a descendent of a Lithosian royal house, but there has been little evidence provided for this rumor. 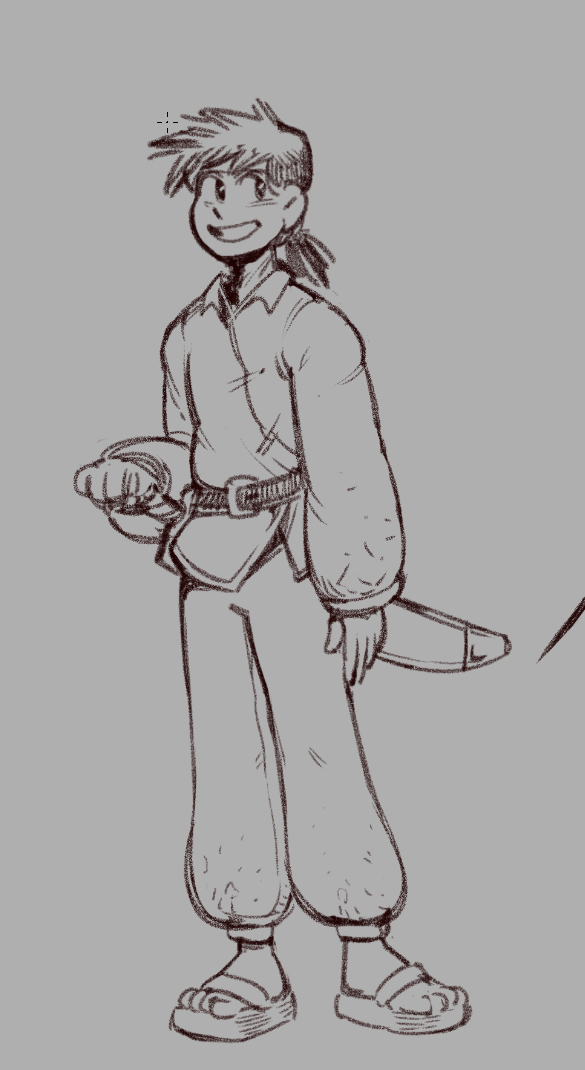