I never met a single human I didn't like. Except for most of them.
— Traveling Tokage Merchant

Humans are bipedal mammalians who populate the majority of the surface of Ardras. They are hairless for the most part with different varieties of hair at the top of their head and in several other patches on the body. They are equipped with multi-digit extremities which they use to grab and manipulate the world around them.

Humans typically live from anywhere between 60 -100 years, with some exceptions amongst those who heavily train their minds and bodies. They take on a diminutive form known as a child for the first seven to eighteen years of their life then spend the majority of their lives performing work and tasks as an adult. As they age their bodies begin to wear down, the skin on their faces begin to wrinkle and their hair begins to fall away and deteriorate.

Humans are happiest in temperate climates where the weather does not produce extremes in temperature.

Humans organize themselves in a variety of ways but most commonly with a single leader at the head of an organization who delegates tasks either for industrious work, a healthy home life, or towards an objective goal.

Humans may lack the cleverness of the tokage, or the stalwart determination of a fervorian, but they are excellent at carrying out complex tasks, crafting tools, and utilizing a variety of means to exhibit their intelligence. Many humans take up the arts, craftmanship, or scholarly pursuits.

Humans have various different naming traditions that change from region to region. Primarily the three core naming traditions are the Lithosian variant, which makes ample use of double consonants, the Oceos'lo'kai variant which incorporates breaks in the pronunciation of names, and the Aristoliant variant which incorporates commonly heard terms in the naming as well as evolutions of the Lithosian variant.

Humans have a variety of different ideals when choosing their partners, primarily based on one of either two factors and sometimes both. The first factor being the physical appearance of their mate which is chosen by health and the likeliness that such a partnership will bring prosperity; and the second factor being the emotional reactions engaged between two individuals. Each culture has several more specific ideals, the aforementioned traits being more of a umbrella observation.

Human gender ideals range between conservative and liberal exhibits of behavior, men are expected to provide with resources like shelter and food, while the females are typically given the role of child-rearing and homekeeping. These are not always exclusively the case.

Human beings have many different ways of expressing love and interest to one another, usually through the sharing of gifts, personal and private connections between two individuals, as well as a myriad of simple culturally oriented rituals such as flower giving or oath taking.

Humans are ambitious and curious creatures, and they are most often happy to make new friends so long as they can find some degree of benefit from the relationship. They have a tendency to be mild-mannered when meeting new peoples, but they are often quick to reveal their true nature through their actions.

Humans are the most widespread of races across Ardras, and the many varieties of ways they that they live their lives changes from region to region; their cultures are directly linked to the environment that they develop in, and humans make skilled use of the resources and landscape to produce and develop trade and commerce.

The first humans appeared in Ardras during the Era of Light, establishing small settlements across the landscape. The mighty Essebu thought little of them at first, but over the centuries human populations would begin to spike and gradually rise to a position of global dominance with the establishment of the Kingdom of the First Men. It wasn't until humans began to learn magic that the Essebu began to consider them a threat to the continuation of orderly existence.   Their power would be consolidated within the confines of their kingdom, with various other cities established. Among them were the ancient settlements of Garras and Hammas, as well as several others which have fallen into ruin in the icy reaches of Chillrend. Smaller human groups would expand outwards towards the south and east during this time.   The Essebu and human races would war for many centuries, during this time the Essebu would pit the Tokage dynast-kings to the south and the newly crafted Fervorian warriors against the humans, but in time this alliance would crumble as the humans enslaved fallen fervorians and subterfuge between the tokage clans would bring them to ruin. Some human groups would perform dark rituals which would empower them to produce magic using their own bodies as a conduit for nura.   Five god-kings, God King Arrliot, God King Barrony, God King Obrrin, God Queen Morrigan, and God Queen Verrid would lead the human races in the war with the Essebu. Each of them would establish their own lines of noble lineage who would rule over the human races after their deaths. Until the events of The Sundering, humans would grow to dominate the landscape of the world.   Under her divine protection, the Sages of Verrid established their ancient order hidden amongst the groves of the Erudite Forest for God-Queen Verrid, their powerful magics proved to be an excellent ward from the prescience of the Essebu. God Queen Morrigan established the city of Garras and waged a bloody war with the world's divine architects with the aid of God King Obrrin. Their actions would be the driving cause for the Sundering.   Following the aftermath of this cataclysmic event, the shattered human kingdoms would piece themselves back together during the Era of Dusk, in the west the Lithosians with their potent magics would be seperated from the rest of the human race; these others would go on to become the various cultures of Aristolia.

Humans are good at adapting to different situations and encountering new things, because of this humans are generally regarded as friendly with most other races. 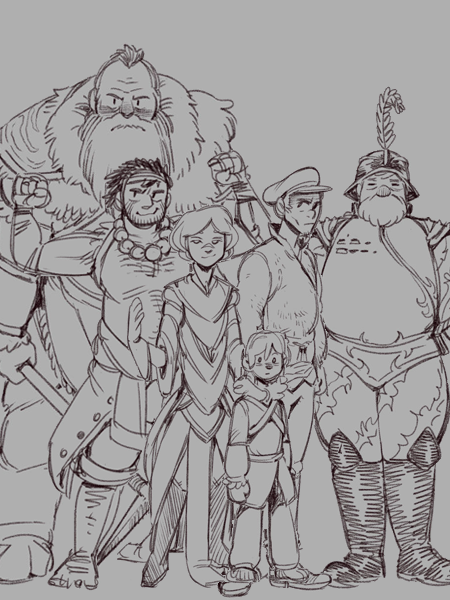 Choose one Culture:   Lithosian - The western mages of Lithos trace their bloodlines back to the ancient God-Kings from the Era of Light, magic comes more easily to them, and their cities are full of shops dedicated to magic and magical artifacts. Their lands are heavily forested and full of ancient mystery, their faith, Erudism focuses on preparing young minds for the use of magic.

Aristolian - The wealthy merchants, mercenaries, craftsmen, artisans, and diplomats of the central plains and forests of Ardras. This diverse culture encompasses humans from three different major kingdoms, unified with their common roots as human beings. They are known for their engineering and crafting of all kinds of weapons and armor.     Oceos'lo'kaiian - The seafaring peoples of the eastern coasts and archipelagos of Ardras. They are known for their freedom loving, rebellious nature and their diverse people groups. They believe they descended from a mythical jungle known as the Meinong Jungle, and their culture is full of many tales of great spirits. They speak in a strange and poetic dialect full of metaphors and cryptic sayings.

Languages. Common, (Any one other language)