Good people. Hard people. I wish they had a better life, but such is not in my power to give.
— Sencha, Blight-Tracker

The Phtangi are one of only three groups who make their life not under the ground but on the blasted surface of Araea. Even by the standards of Araea, theirs is a hard life. They contend with beasts like the Mahu'ca and Blight in a hostile, dangerous environment. It would be a mistake to say the Phtangi thrive, but in a land that seem inimical to human life yet breed monster, they have found a way to survive.

The Phtangi are a nomadic people, constantly roaming on the backs of the Goa Strider to survive and find what they need. They are hunters and gatherers, as the Surface where they live allows for no agriculture. In a world that give them very little, they have learnt to make the most of everything they do get. Nothing goes to waste and there is no sentimentality about anything, either person or item. Things without purpose are either refashioned until they do, or discarded. They can be called a hard people, but theirs is a hard life. The lengths the nomads will go for one another will give even the Kaia something to admire. 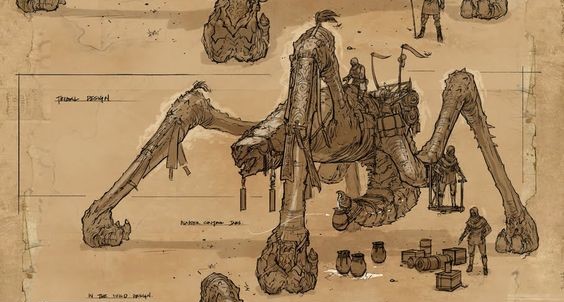 The average Phtangi are shorter than the average cave-dweller and tend towards a wiry build, but are otherwise similar to those who dwell below in that they range in hair, eye and skin color across the spectrum from pale the deep brown. Unlike most people in Araea, those who begin pale typically tan due to their surface-dwelling existence. Among the Phtangi, the most admired virtue is self-sacrifice and the most loathed vices are laziness and selfishness. Those few exiled from the Phtangi rarely last long on their own.

Totem Burial   Nothing goes to waste among the Phtangi and that include the bodies of their dead. Some are used to create effigies and totems that the nomads leave behind or carry like banners from their Striders. When kept, they are believed to bring good luck - but in part, many who are made into totems were no longer able to support the group and their death was a burden lifted. The nomads mourn and celebrate them, as best the surface allows them to.

The Phtangi move along glaciers and tundras, while scouts prowl around the main group both to spot threats and opportunities. The Goa eat red algae, but it is poison to humans and so the Phtangi must hunt and gather beyond what they feed to the Goa.

Each Phtangi group consists of several families, a few orphans or others, and their Goa. Each are essentially ruled as a loose democracy, where the heads of each family debate the course action when required. There does not tend to be single rulers, though some especially persuasive or powerful family heads come to essentially fill such a rule. The punishment for crimes depend on the size of the group: some Phtangi tribes are so small that they cannot afford to punish offenders too harshly, while the larger tribes have more leeway. In either case, attacks or theft against other Phtangi are the most heinous crime one can commit and the worst punishment a criminal can be given is exile.

The Phtangi and Others   In cases where the Phtangi meet others not of their kind, they are usually suspicious but amicable. These are opportunities to trade, acquire new goods - particularly metal, of which the Phtangi have very little - and sometimes get help. While no city-state have yet been willing to adopt an entire Phtangi group and let them settle in the caves, they're been willing to help the nomads.   The Phtangi rarely raid or attack other humans except in the most dire of circumstance, though individual travelers or the occasional group can and do go missing from time to time. Most, however, have only good things to say about their encounters with the nomads. 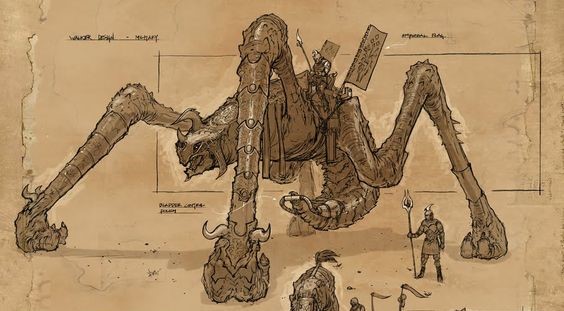 We don't really know much about the Phtangi, or how they ended up this way. From what they've told me when I spoke with them, this is just the way its been for as long as anyone can remember. Even their oldest stories are tales of things that happened on the Surface, rather than down in the caves. All we can do it guess, and yours is as good as mine.   The best one I've heard is that they were once part of an isolated cave-system in that region, perhaps as settlers from elsewhere. With no access to the Inner Shell or the other parts of the Outer Shell, there was only one way to go when whatever drove them out of the caves happened. Flooding? Blight? Who knows - but it must've been pretty bad if they picked the Surface over that.   For their part, they're not really keen on discussing the past. Too many hardships, I suppose. They keep going and look forward instead of back. There's something to be said for that.
— Sencha, Blight-Tracker

The Surface   Between the continent-spanning dust storms filled with Blight and the voracious predators that have evolved to thrive in them, there are many dangers for the Phtangi Nomads to worry about. The Surface of Araea is a sparsely populated wasteland of frigid tundras, barren deserts and near omnipresent radiation.   Read more about the Surface

There would be no Phtangi Nomads without the Goa. The great, long-legged beasts are what make their way of life possible, used for everything from carrying cargo and riders to battling predators. Taming a Goa is difficult and potentially life-ending, but without them the nomads would be lost.   Read about the Goa Strider

Surrounded by blight and with nowhere to go during the Season of Storms, mutations are just as common among the Phtangi as they are among the Exiled. They range from harmless but disfiguring to lethal, but have no particular spiritual or cultural meaning. While it is never asked of them, those who suffer especially crippling or debilitating mutations sometimes ask to be given the Totem Burial. They are euthanized with a bitter drink of poison and drift off, knowing that their death is the final aid they can give their families.   Read more about Mutations

Exiled   Despite sharing the Surface and all the hardships that come with it, the Exiled and the Phtangi do not usually interact much. Rarely, an Exiled will be allowed to join a tribe, but more commonly the Exiled are treated like any other stranger.

The nomads are superstitious, but prayer has never filled a belly or moved a heavy burden. They have remarkably few divinities, or at least that they are willing to share with outsiders, but have been recorded celebrating the sun and the moon. To most of Araea, where the sun is seen as either a great devouring beast or glob of poison light, this is more bizarre than any surface god could be.   To some, the rituals observed by the Phtangi have echos of the dream-encounters reported with the Q'x, which may or may not be coincidence. 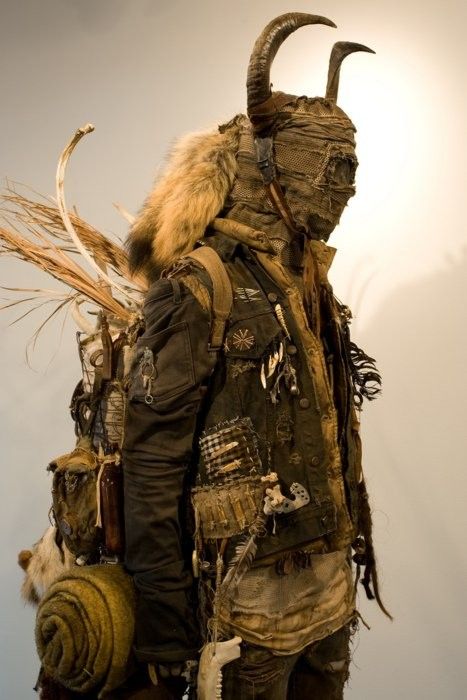 An interesting symbiosis of man and 'beast'. I wonder if one side needs the other more than they need them and what would happen to both were they to split...

Interesting idea!   Ultimately, the Goa are native to the region and humans are not. They'd probably do a lot better without the nomads, than the other way around. :)