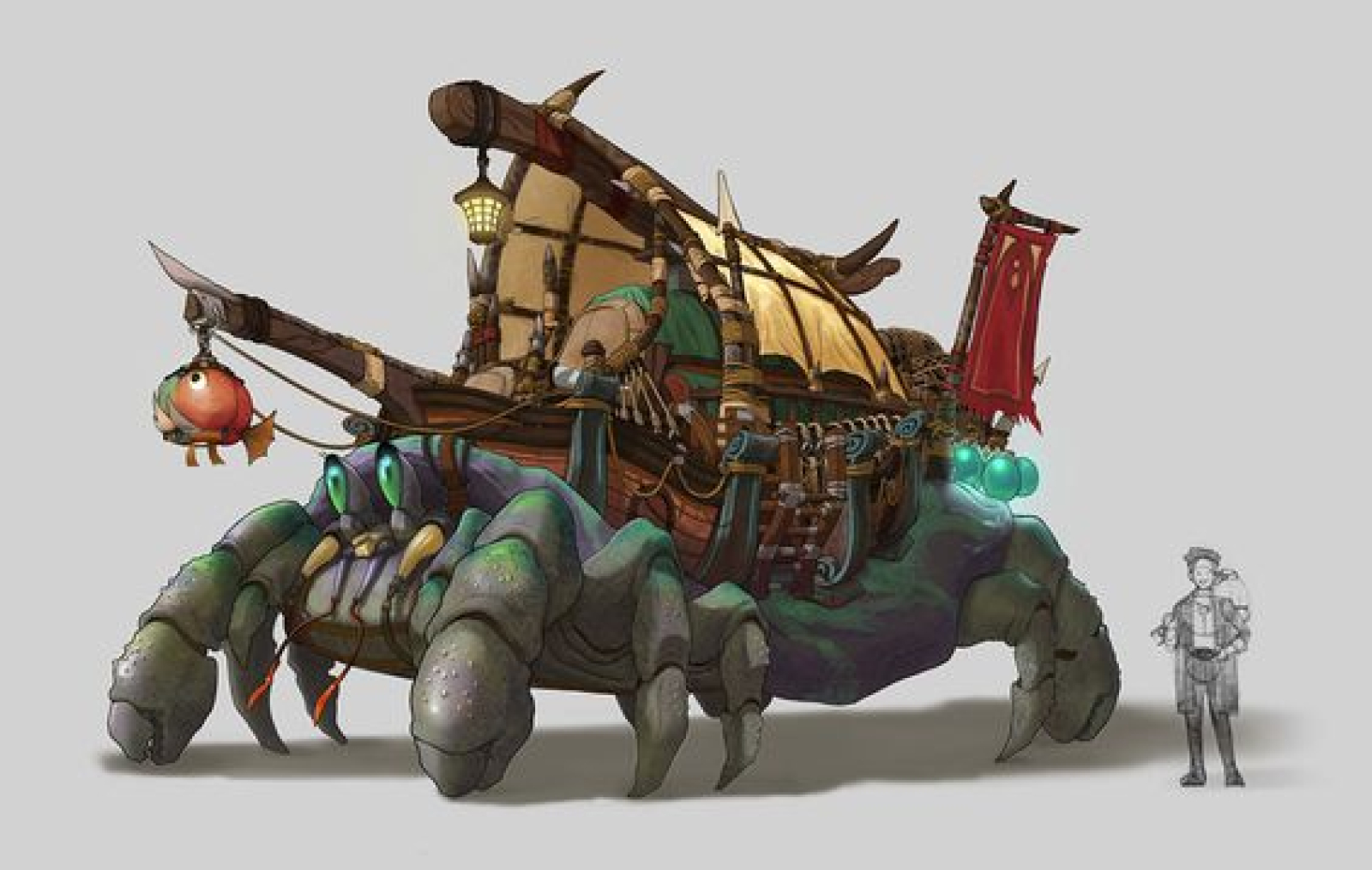 Big, dumb and adorable. Just don't leave anything you're not willing to lose within reach of 'em. They'll eat anything.
— Yeseult, Merchant Extraordinarie

Khtam are amphibious crustacean of great size, often used for hauling and carrying cargo by those who can afford them. The docile beasts have been domesticated for centuries and are one of the most common types of animals used by merchant trains or industry. While not fast, their great strength, even temperament and simple diet make them ideal for their traditional tasks.

The Khtam are six-legged crustaceans, with a heavy exoskeleton and massive front claws that the Khtam use to shear apart food, then use their smaller front arms to shovel into their mouth. Once something is caught in the claw of a Khtam, it rarely gets loose. Despite their mass, Khtam can use their claws to climb slopes and drag themselves over edges. The eyes are set on stalks that shorten as the Khtam grow older and their shell thicker.

One of the most common ailments to bother Khtam are parasites, usually ingested by the careless beasts. Even their shells can become ladened with barnacle-like growth and burrowing parasites. Particularly afflicted Khtam can become hollow-out husks or carry shells covered in opportunistic infections.

The exoskeleton of a Khtam vary on color depending on the temperature of the waters they developed in. Cold waters tinge their shells blue, while warmer waters make them more green. The claws are always either red or blue, with female Khtam having red claws and males having blue. Female Khtam usually have less developed shells, needing to regularly shed theirs for mating.

Khtam mate annually, migrating back towards the water where the females molt out of their exoskeleton. After mating, the female will carry the eggs on her abdomen in a yellow-ish growth for about four months before they hatch. Males will carry and protect the shell-less females for that duration, but couples rarely stay together once the female's shell has regenerated. They have been observed to have favorites, with couples that have mated before returning to each other at each new spawning season.   Once hatched, the juvenile Khtam resemble scavenging-shrimp and do not develop legs, claws or a strong exoskeleton until another four months. 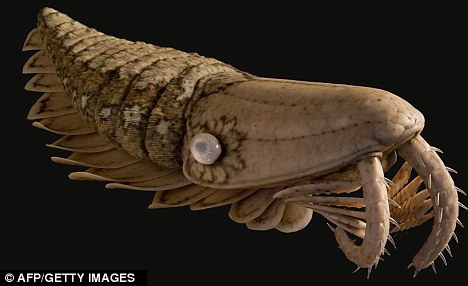 by Getty Images
The young Khtam recieve little care from their parents once they have hatched and many are devoured by hungry predators or human hunters. They scavenge corpses and feed on any vegetable matter in the water. As they grow into maturity, they will begin to molt out of their early soft shells and develop into their full amphibian form.   Old Khtam return to the water again and cease hunting. They scavenge for food until age, disease or injury claim them, at which point their exoskeletons slowly fossilize and become home (or food) to other scavengers.

Khtam are scavengers and notorious for eating nearly anything they come across, from dead fish to old leather boots. They spend most of their time dredging the waters were they live for scraps of food and will frequently venture out onto land if none should present itself. Beyond scavenging, the Khtam will eat anything it can catch such as fish, snail, isopods and starfish, in addition to any and all plant matter. In times of famine, Khtam females have even been known to devour their own eggsacks.

Khtam do not react well to Blight and any lengthy exposure will force the creature into hibernation. This does little to protect them from the ravages of radiation, and the Khtam will slowly waste away. Merchants who bring their Khtam to the Outer Shell take care with which tunnels they pass, while unsavory types have learnt that feeding the gluttonous beasts blight-tainted meals is an effective but risky way of disabling them.

Like any crustacean, the Khtam will molt out of their exoskeleton as they grow into adulthood. Faced with danger, Khtam will usually curl up into a near impenetrable ball and wait it out. For this reason, a Khtam without its shell will be skittish and shy.   While not exactly friendly, Khtam are docile beasts and are not easily provoked. They rarely attack and are easily lead, which have earned them a reputation as dim-witted. The Khtam have few predators in the Inner Shell and have an underdeveloped sense of urgency as a result.

Easy to feed and easy to lead. Unlike people.
— Yeseult, Merchant Extraordinarie

Khtam are one of the most common methods of hauling goods in the caves, usually carrying it on their back or by dragging sleds. On paths that allow their passage, Khtam-trains can span for miles with a couple of beast every hundred yards. While they can traverse some slopes, they are best suited and most widely used on more even terrain, prized more for bulk than versatility. They also see use in industry such as mining or Cave-Capped Hatter yards where they are made to haul away all manner of things too heavy for men. 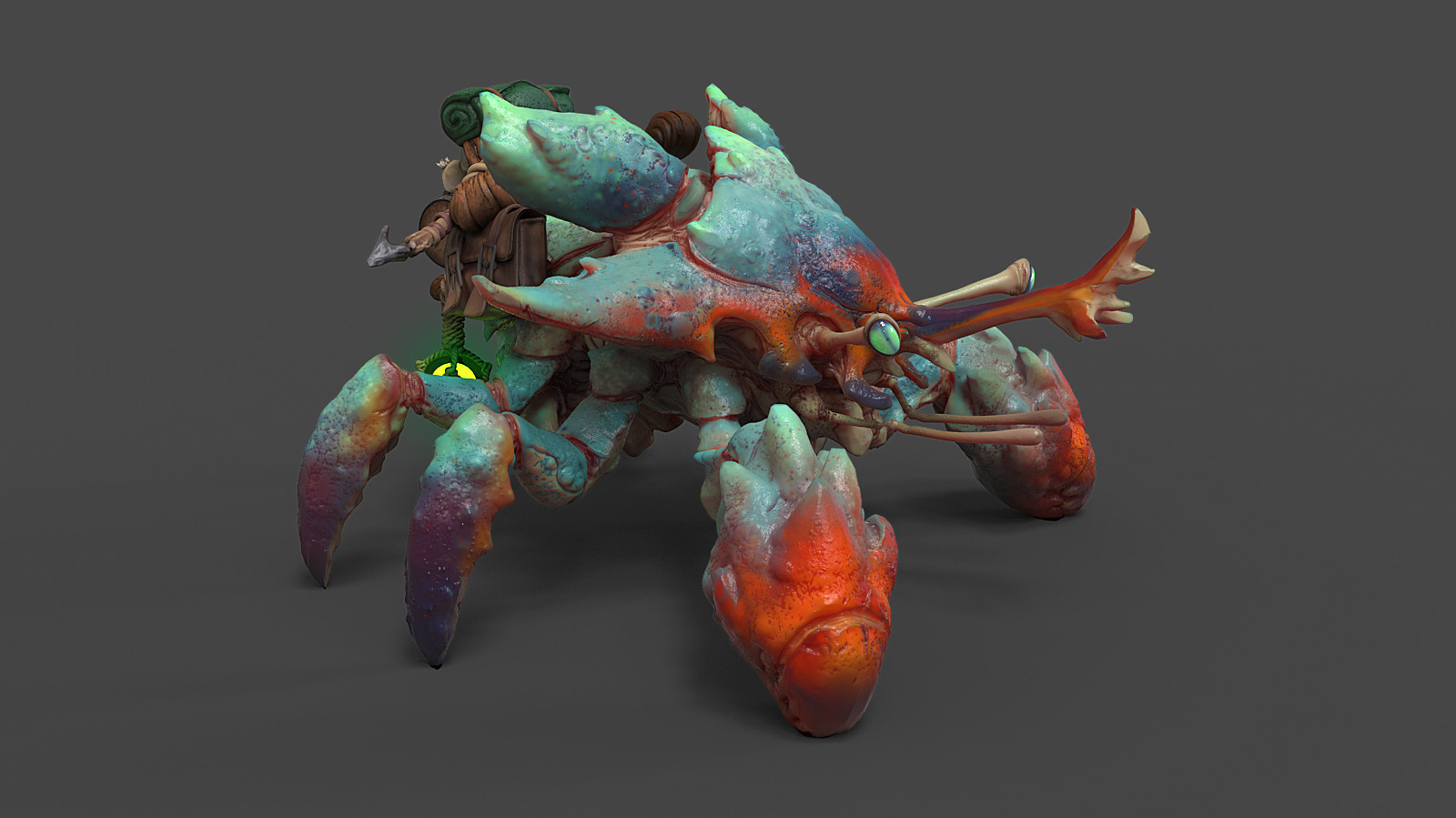 by TwoC
Raising Khtam is an important and profitable business, but one that require considerable space to hold the beasts and the water for their young. New ranches are established only with great investment. Disease and parasites are constant dangers that the ranchers need to inspect their herds for. As such, Khtam are expensive to buy and though the Khtam are not picky eaters, they can go through prodigious amounts. It is rare for the common folk to own one by themselves.   The Khtam can be eaten but for for their cost, it is only done out of desperation or decadence.

The Inner Shell, the Far Deep

Because of their sensitivity to radioactivity and the much smaller tunnels, the Khtam have a limit presence in the Outer Shell. Lesser Khtam live in the more waterlogged caverns and tunnels in the Outer Shell. They are much smaller than their Inner Shell cousins, with long, spindly legs.   They rarely grow any larger than a Chiwara and are considered pests, eating crop and occasionally pets.

The Khtam of the Far Deep roam the vast rivers and lakes. Unlike the Khtam elsewhere, they face predators more than capable of cracking their hard shells. Greater Khtam tower even over the largest Khtam from the Inner Shell, with an aggressive and unpredictable temperament.   With shells nearly impenetrable to any but the heaviest weapons, Kaia avoid them when they can.

War-Khtam?   Every now and then, someone gets the idea to turn the massive armored Khtam into beasts of war. So far, it's been unsuccessful. With the Khtam's natural instinct to curl up and hunker down at the first sign of danger, Araea seem to be safe from having to face battle-crabs in war any time soon.

The most common way for ranches and merchants to mark a Khtam as their property is by branding the shell. As long as the brand does not pierce the shell, the animals are not harmed.   Khtam-russling thieves have perfected the way of sanding off and imitating such brands. Ranchers keep looking for more secure ways of attaching their stamps to the beasts, like hammering marked pieces of metal into the shell.   The exoskeletons of the Khtam are sometimes trimmed and shaved down to make the beasts lighter and able to carry heavier burdens. Not all Khtam respond well to the treatment, with some reacting as if they had just molted out of their shell.

I adore this! Lovely article about some lovely critters.

I'm glad you like them! :D   There's more coming later today or this week, including stuff like Greater Khtam.. :)

I love this article! I was left wondering though. While they are scavengers, are they aggressive in any way or are they more skittish?

While not exactly friendly, Khtam are docile beasts and are not easily provoked. They rarely attack and are easily lead, which have earned them a reputation as dim-witted.

Khtam who have shed their shell are a lot more skittish, as are Lesser Khtam.   Greater Khtam are *very* aggressive, however. :D   Thank you, I am glad you enjoyed it!
Creator of Araea, Megacorpolis, and many others.

Whoops, I missed that. Thanks for the responses though.

I like how you used the beast to explain other aspects of life in Araea. Excellent worldbuilding!