Prized throughout the caverns for their many uses, the Cave-Capped Hatter has become an invaluable part of every day life in the deep. Orchards of the Hatters rest on thick beds of lichen and moss, fed with insects and human waste mixed with soft clay slurry. Shroom-cutters work daily to keep the stalks free from parasites and pests until time comes to fell them, cut them to pieces for a myriad of uses.

Cave-Capped Hatter are tall and thick underground mushrooms, ranging in height from under a meter to well over three depending on where in the underground they grow. They have pale brown flesh with a tough, spongy consistency and are resilient enough that tools of stone or metal are needed to cut them down. The hood is wide and drooping, with a rough, knotted texture. They usually grow on a bed of lichen and moss, with powerful roots that can crack rock and dig deeper into the stone in search of sustenance and water, though in a pinch a pile waste or compost will do.   Once cut open, the interior is moist and stringy. Sponge-like and tasteless, the flesh is inedible by most animals though several species of pests and insects have developed to especially dine on the Hatter. 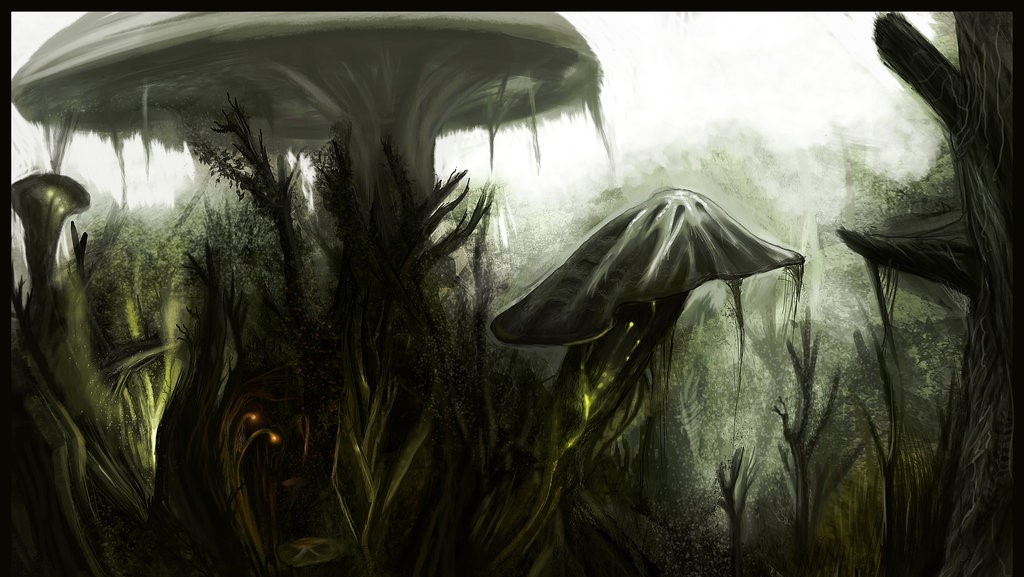 Cave-Capped Hatter are found all the way from the lower half of the Outer Shell and all the way down into the Far Deep in one form or another. Those closer to the surface grow smaller and once processed makes for inferior products, while the Hatters in the Far Deep grow longer and stronger than those found anywhere else. Cave-Capped Hatters can survive in both heat and cold environments, as long as the area is relatively damp. They prefer the open caverns, where there is more space to grow and more fungi, lichen and insects to feed their roots but can sometimes be found in smaller clusters along tunnels and passage-ways.

Cave-Capped Hatters can be found in some shape or form throughout the underworld, though not all kinds are suitable for cultivation or use. At least one kind respond to the blow of a cleaver by expelling a cloud of poisonous spores.

Treated Hatter flesh (or Hattick) is one of the most common building materials in the caverns other than stone, being both lighter and easier to work with. It is commonly cut into planks and used to build everything from homes or doors to bridges and scaffolds. Smaller parts can be whittled and formed into everything from cutlery to weapon shafts. The two most common forms of Hattick is the plank and the shaft. Raw fibers can be parted and pulled away in strings before being spun together, then treated in a different solution to produce rope. The same fibers can be woven into sheets of extremely rough fabric, though that tends to be less common outside industrial use.   The hood of the Hatter can be cooked into a thick gruel with the consistency of paste and an unpleasant, vaguely mold-like taste, a meal usually reserved for those who can afford no better. The hood of a Cave-Capped Hatter that has absorbed industrial pollutants, radiation or heavy metals, however, are poisonous to eat. It can also be dried, then used as fuel to provide both light and heat.

Before it can be useful, the flesh of the Hatter must be treated in a process similar to tanning. It is cut into pieces or planks and left to dry, then treated with a compound of waste matter (typically ranching remains urine, and similar unpleasantries) that hardens and solidifies the mushroom matter. Properly treated, it is resistant to decay and mold is a sure way to detect cheaply made material. For this reason, Hatter tanners are unpopular neighbors and often pushed to the same quarters as tanners and spider-ranchers.   Once treated in this manner, the resulting matter is referred to as Hattick and used in everything from weapons of war as shafts or the frames of war-machines, to whittled down to toys, wheels and minor tools. 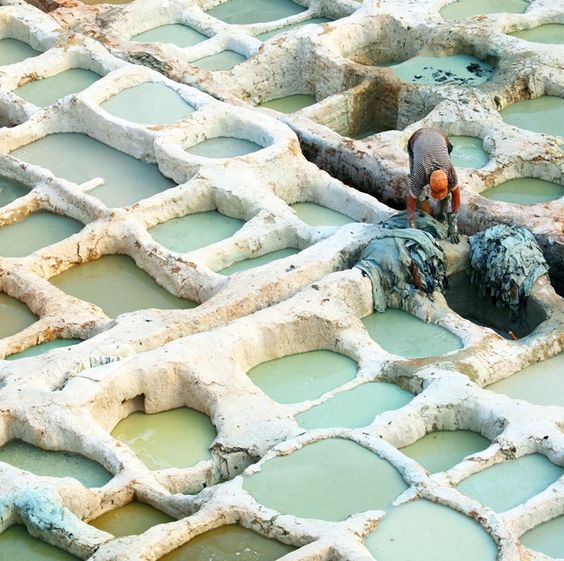 Hattick Fiber Rope uses a similar process, but the raw fiber is first pulled apart into individual strands before being dried and treated. Creating lengthy rope is difficult, tedious work usually done by children or slaves. From spreading the spore, treating the flesh and hacking the finished hattick into usable shapes, the Hatter employs countless.

Some skilled artisans specialize in using the malleable sponge-like state of raw Hatter flesh to sculpt it before they treat it to create pleasing, organic shapes and curves. Others use wire and rope to shape the growth of the Cave-Capped Hatter to better create the works of art they sell. 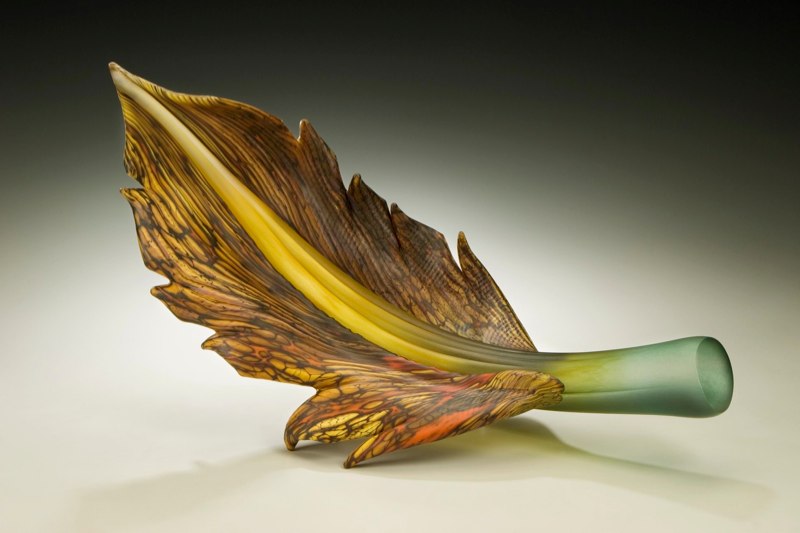 Shroomomancer   Many variants of the Hatter are made by magic and focus on crafting ever more use useful (or deadly) mushrooms. These strange occultists are sometimes called Shroomomancer, but rarely to their face. 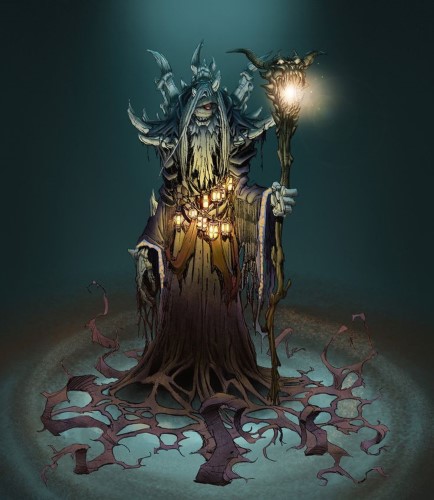 by Tom McWeeney
Read about Shroomomancers 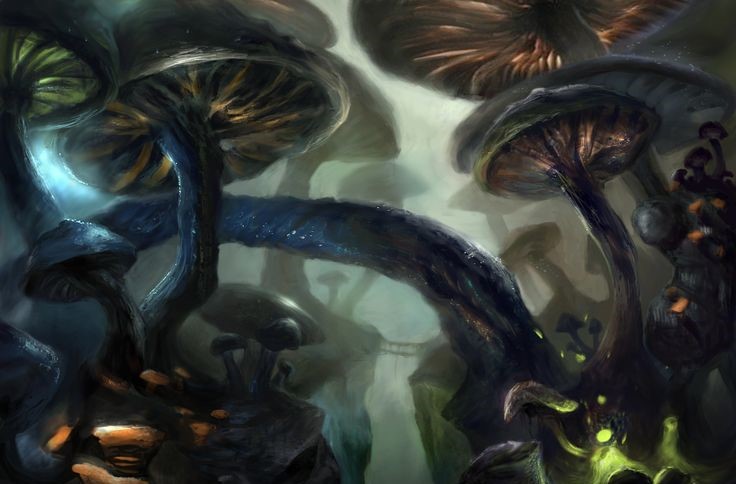 The most common and tenacious pest that trouble Hatter harvesting operations. Fist-sized, six-legged, spherical things with chitinous carapace and ravenous hunger, the Hatter Gnat will use its shovel-hook like front claws to burrow into the Hatter's exterior and then begin to eat it from the inside.   Shroom-cutters hate the gnats more then any other pest or problem as the vicious little bugs are more then happy to snack on them too, given the opportunity. 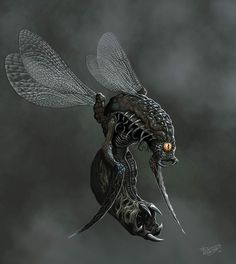 Through the centuries, Far Deep exploration and laborious experimentation revealed an array of variants of the common Cave-Capped Hatter, from luxurious and beautiful to dangerous.   More common variants change things like color or appearance, while the rare few can become as hard as iron or made into inherently poisonous weapons.   Common variants:   Rock-Capper - The hardest of all the Hatter variants, the Rock-Capper is also the most difficult to work with. Hattick made from it has a pleasing greyish tone with white and black veins, and is favored in the construction for heavy furniture or support structures.   Agara-Cap Hatter - A small, feeble looking variant of the Hatter that is deliberately fed a soil mixture that includes waste and run-off. The end result is a hard Hattick that is venomous, through the reduced size of the mushroom means it is mostly used for daggers, bolt heads and similarly sized weaponry. 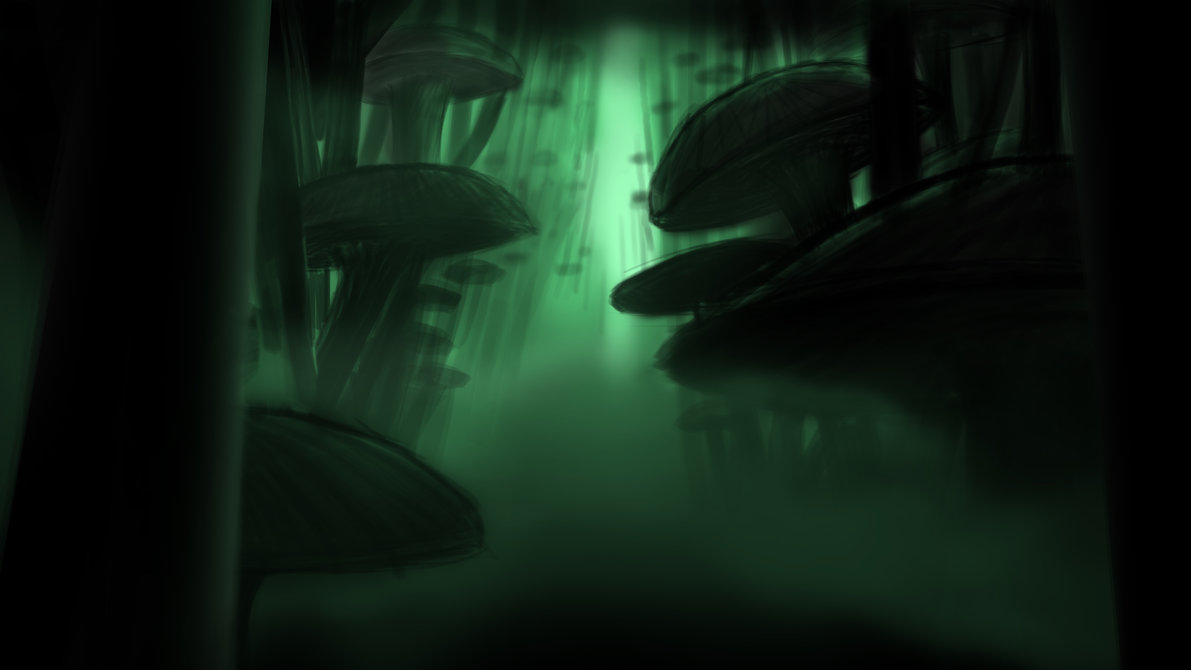 The refinement aspect of this was the most interesting part, the fact you've thought the process through is fantastic.

Thank you :)   I wanted to try to go for a deep dive into something common but defining for the setting. And I do love details, hehe

I really like how there are so many uses, makes it feel more grounded and realistic. Nicely done.

Thanks!   In a world where trees aren't really a thing, I wanted to figure out... How do they manage without wood? The answer turned out to be "treated mushroom flesh". Mahogany and such might have equivalents in rarer hatter variants. :)

Is it more used that wood ? If yes that's kind of cool to build houses with mushrooms. Again, a very good inspiration, well done !

It is used instead of wood. Trees doesn't really exist in this world. So, they had to figure something else out.   Thank you! :)