Tilor O Irath'Miesdys or simply the Order, is a renowned military organisation who's sole purpose is to defeat the creatures of Rathias. The Organisation is an independent organisation who takes no part in any country squabbels, except if it concerns the defeat of Rathias' creatures, in which they are mostly briefed or asked in these matters, and they themselves handle any situation should it be required.   Their nickname, Frontieers, comes from them being on the northernmost part of Aistana, which borders the only landmass that connects the North to the Western and Middle continent, though a channel has been built in order to help ships sail though. The Tilor have built a wall and their fortress there to protect the Western part of Agia against Rathias creatures, who seems to always travel by land. While they are known to be at their fortress, the Tilor have other smaller fortifications in other countries as well.   The Tilor is one of the oldest military organisations discovered in Agia. Not only does the Lasfydd recognise this as the first one, but also evidence of a more complex military organisation before this one have not yet been found. Whether it was the first or not is only guesses and beliefs until further proof is found.
Be a new recruit

The Hand is the leader of Tilor, and is automatically made Hailan after his or hers death. Immediately after being titled with the Hand, the Hand chooses his Glove, this can happen several times during his leadership, but mostly loyalty and experience is what is chosen from. While the Tilor does not want to engage in political squabbles, there have been some within the Tilor several times, but their doctrine tells them never to raise a weapon against their brethren. The hand decides which strategy to use and which formation, thus it is vital the Hand knows everything about any foe the Tilor has fought before and be prepared for other threats they may yet not know.

The Glove is the one who assist the Hand with the Tilor. He is chosen amongst the senior warriors of the Tilor by the Hand, and needs to be tested to see if he truly knows how to help the Hand. The Glove helps to plan and manage the day-to-day tasks within the Tilor.

The Quill is the scribe of the Tilor, he is also a senior member of the Tilor and he usually teaches the younger members of the Tilor about Tilor's doctrine, history, and teaches them how to read and write, should the day come where regiments are too spread out on the battlefield and messages is needed to be passed around or passed to each other by bird.

The Chest is the one who manage the organisation's treasury and together with the Quill makes accountance, since they have to pay taxes for the land they lend in different countries. The Chest must be a Senior member as well.

The Seniors are the ones with most experience and knowledge. They usually guide the Hand in decision-making and in war strategies, there are not much difference of powers between the Seniors, not even the titled Seniors and non-titled Seniors are considered to be of much differences either. On battlefield, they act as captains of a regiment (about 120 men), which is divided into four, with the leader named a Quatermaster, and each quarter consist of three to four columns, each contains about 9 men, which is commanded by colonel.   Although all members of the Tilor trains in the usage of different weapons while training, they are chosen during their training which weapon shall become their designated weapon. There are three kinds of regiments: The cavalry, the infantry, and the artillery.

The Cavalry is considered to be the finest of the regiments, simply because they get to train with both spear and sword on horse. They borrow the Tilor's horses, who are well trained for combat. It is up to the cavalier to control his or hers horse's level of fear. If the cavalier is not able to control it, they will get demoted to infantry. Only warriors who are able to controle their fears will get promoted to the Cavalry. The Cavalry accepts neither previous rank nor bribes, since it will only cost the Tilor heavily on the battlefield should a horse panic.

The Infantry consist of the footsoldiers, who are either specially trained in pike or sword.

Pikemen are often those who maintain a strict formation where they could harm at a greater distance. Once the formation is broken the pikemen throws their pikes to the ground and use either swords or daggers in close combat. Most of them carries only a small shield to use in close combat, while others simply preferes not to carry a shield.
The pikemen are trained to face front and use the pike in an aggressive attack, where each rank presents four or five layers of spearheads to the front of the formation. Those in the front can either charge, while those behind hold their pikes above the head of the front row in order not to harm the rank in front of them.
Another formation is the front line take a defensive posture and the second rank charges. The front row points their pike upwards while slightly bending foreward. The second row holds their pikes straight, the third row hold their pikes above the head of the second row in order not to harm them.
The swordsmen are those who will both protect the pikemen's flanks and flank the enemy. Whilst the pikemen are good at greater distance, the close combat is the swordsmen's speciality. They carry both shield and sword in combat. Almost every members either dreams to be a cavalry or a swordsman, simply because of the romanitised version of the founding father of the Tilor, Leiran. 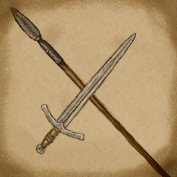 Those regiments who focus on artillery will mostly train to shoot with bow and arrow and, they do train in swordsmanship as well, in case they should end up in close combat. Every artillery regiments can bring trebuchet to the fight, but carrying it to the battlefield can prove to be more challenging than what is worth. Especially since most fights demand them to travel fast to the creatures of Rathias. The Artillery is not a rank that is highly sought after, because most people believe the romantisised glory of close combat. Luckily it is not the members who decide their place, but their skills.

The Tilor were previously considered to be a very noble organisation with a lot of people wanting to join. The glory and romantinisation of Tilor made it very attractive, and every boy dreamt of defeating Rathias' creatures in a shiny armour and their gold encrusted sword.
Now the Tilor is suffering from lesser enemies, and they have dug out an old enemy to be the ones they should fight now. They tell that Rathias sent out Illirfrains before her death, and every fallen soldier on a battlefield can become a victim for the Blackenbirds of the North that will become the Illirfrain. This has created a lot of fear and hatred towards this organisation in several countries. But since the Tilor is not being controlled by neither the church nor any other country organisations, they tend to run freely. After all both the church and the countries are scared what would happen should there be no defense line against the creatures of Rathias.
Another thing that is frowned upon, is that the Tilor accepts both men and women to fight. In the Tilor's eyes a woman can become just as good fodder as men for the creatures.

Inside the Tilor, infighting can happen, though never with weapons, at least not knowingly. Since the creatures of Rathias has dwindled marginally in size, there are some Seniors who disaggree which direction the Tilor should take. Some wishes to dissolve the organisation, while other feels the need to keep it running at all cost. Those who want the organisation to continue, tend to argue that it is for the common good, and if they are gone, the creatures can suddenly invade the Irathians. Some of the field leaders such as colonels and quatermasters tend to accept briberies for people not being labled as an Illirfrain.
And most members of the organisation tend to think they can do nothing wrong, since the organisation was formed by the Goddess of Light, Irath's, wish.

Every member of the Tilor is Irathian, and follows the Book of Irath. While the members are religious, their agenda is not to convert people to the Irathian faith, nor is it a organisation belonging to the church. Their only agenda is to slay every creature of Rathias, since that has always been their purpose since the founding of this organisation. Their second agenda which alignes with the first agenda, is to protect the rest of the world from Rathias. The "rest of the world" means mostly the Western part of Agia, not the South since it's another religion, and no one knows what is happening in the Middle part of Agia.
Their third agenda is to never raise a weapon against a fellow Irathian or Lesfyddian. If they do, they would be severely punished not only by this organisation, but also by other organisations such as countries.

I shall grant your wish to take revenge upon the beast. I will make you equipt and give you powers to defeat it. In return you must form an organisation that will act as my sword against Rathias' creations and followers, should they act against me. Said Irath.

I agree to your suggestion. I will kill the beast and become your sword. Said Leiran. Irath took his sword and with her light, made it newer and better than it had ever been, and had it ingraved with the symbol of the Glux.

- A passage from the Book of Irath

According to the Book of Irath, this organisation was founded by Leiran after his fight with the Oxenbeast. He founded this organisation afterwards and became the first Hand. Several decades later he died in the first Dymórleshran war, in which the organisation was first introduced to the almost invincible creatures. His dead led to the discovery of water being the only thing that could defeat the creatures.
Since then there have been three Dymórleshran wars. Other wars have been fought as well, such as the war against Isith, when she tried to conquor the Western part of Agia.

Over time the creatures dwindled and so did volunteers. The Tilor felt it necessary to conscript people to their cause, otherwise Agia would be without protection. They conscripted people who they thought would either fit in the Tilor, or young people over seventeen summers they thought they could shape.

I love the fact that the Tilor seems like an organization by which thousands of stories could be written following the stories of any of its members. It has a rich history but also the potential for an amazing future depending on what may come. Not only that but the stories and experiences would be quite different depending on the time period.   I do have a question though. Considering that there has been conscription of young adults into the group, have there ever been any uprisings or attempts to reform some of the structure. Or is there an indoctrination process that largely keeps this from happening?