Irra, Mother of the Cursed Ones

Irra was an orphaned aarakocra best known for aiding in the release of the goblins, hobgoblins, and orcs from their curse. And initially leading them to a more peaceful society.

During the Rampage of the Narcissist in the Lofty Peaks and Southern Grasslands, Irra’s parents died - leaving her an orphaned hawkling. Amongst the rubble, a crystal dragon named Kazaomi found the forgotten bird child and adopted her. Kazaomi took Irra to the highest peak, away from the war, to raise her. But as Irra grew older she became more curious about the outside world. At fourteen, she flew away from home. Eventually joining the Aarakocra Air Force.   Distraught, Kazaomi searched for her child. By the time she found her, Irra was leading a strike unit. Although Kazaomi wanted to take Irra away from the war, back to peace on the mountain top, she could not convince the young hawk to leave.

Irra was obsessed with battle. For the first time in her life, she felt as if she was contributing to something meaningful in life. She was avenging her family and helping to protect the innocents at the same time. It was only after one of her bomb strikes on Narcissist's Insurgents that her thoughts turned inward. It was only when she saw an infant orc within the rubble that she realized the cost of war.   Pain begets more pain. War begets more war. Whether aarakocra or orc. Hobgoblin or Dragonborn. All folk were meant to find peace.   Irra decided to fight for peace. Without word to anybody, she surrendered, entering an Insurgent camp to attempt making peace with her enemies. It was only within the camp that she realized that something was wrong with her enemies. Their souls were sick. Something Narcissist had done had irreversibly harmed them.   Irra only survived because her adopted mother, Kazaomi, had watched her battles from afar. Not ready to let her child go alone. In the Insurgent camp, Kazaomi was ready to burn the world to the grown. Irra pleaded with her to sever the psychic bond with the Narcissist. Kazaomi destroyed the bond of every hobgoblins goblins and orcs in the lofty peaks and valley. The sheer amount of power this took was too much for Kazaomi to channel. As the bonds severed, Kazaomi burned away. Leaving behind only thirteen gemstones.

Leading the Cursed to Light

With no time for mourning, Irra set on a way to end the war. After the Insurgents joined forces with the Aarakocra Air Force, they were able to defeat the Narcissist with the thirteen crystal gemstones Kazaomi left behind. From there, Irra acted as the first guide to the Insurgents, leading them to form their own communities and worked towards peace between one another and finding peace within themselves. Irra raised the orphaned orc and encouraged others to adopt children left behind as a way of remembrance. They followed her until her death and many still look towards. her as a saint. 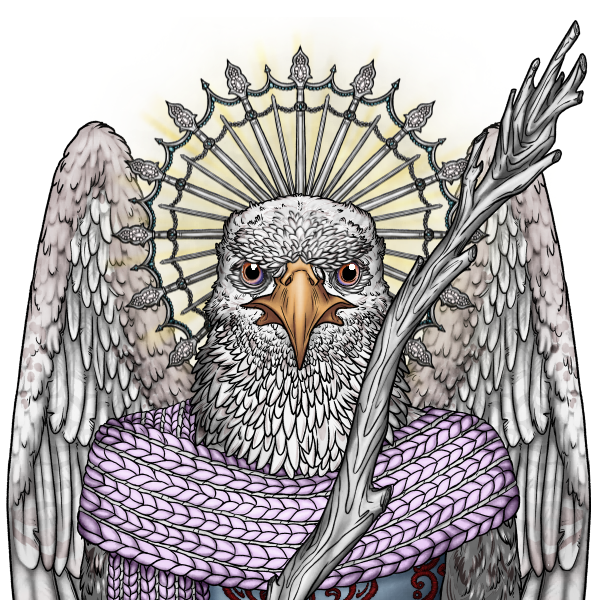 Irra was a confident an outspoken person. She was curious about everything she encountered and had a love for exploration until her death. Those in the Air Force would speak to her unconventional thinking and her strategic mind. They would often say she doesn't think like a hawk, she has the mind and flight of a dragon. The legacy she is most noteworthy of leaving behind, however, is her compassion for the lost.
Children

Answering: "a great leader of their people"
Visit CassandraSojourn's Competition Page Check all other answers to this prompt Competition Homepage

Hi there. I reached out on Discord a week or two ago and didn't receive a response, so I will post the message here as well:   Hi there! You may not know me, but I am the sponsor of the Great Leader of Their People Summer Camp Prompt this year! Since you wrote this article, I would like to know, would you mind me reading it aloud on my Twitch channel this week? I have a lot to get through so it helps to do it live while people watch. I've been going live at 8am and 8pm Eastern Time every weekday. If you join and comment, I can go over your article right then and there! If you'd like to coordinate a specific date, let me know. If you aren't able to make it (or don't want to be present live), you can also always watch streams after the fact on my YouTube channel   BUT, if the answer is NO because you'd rather I not, it's okay! Not agreeing to be streamed definitely does not put you at any disadvantage for winning in my eyes. Please respond swiftly by replying here (make sure to click REPLY under my comment or I won't be notified), message me on my World Anvil profile page, Discord, or anywhere else you find me online.   Thanks again! Whatever you choose, God bless and much success! <3