World / Character Creation / Folks / Human
Humans are bipedal folk native to Melior. Their ancestors originally hailed from the Jolundrian continent and since then they have slowly come to populate all regions of the world. They're very dexterous with their limbs which has lead them to great discoveries and inventions.   Human folk have only got to grips with magic in the last 50 years - it was introduced to Melior during The Rupture that opened rifts across the world to the mysterious Ol'Mire plane. 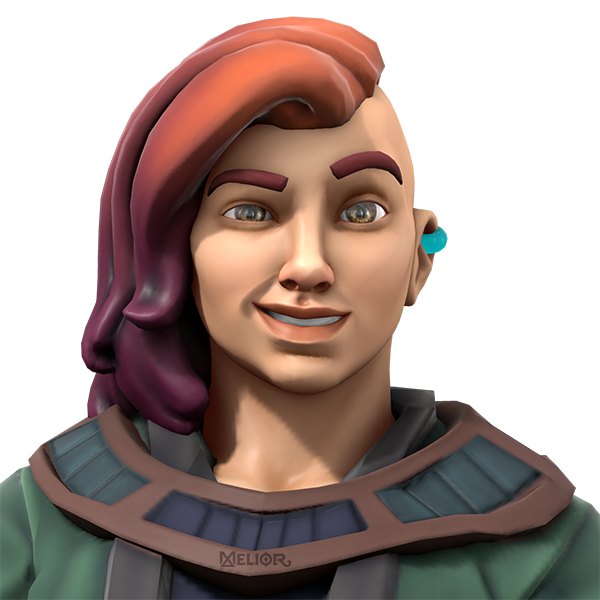 A Human with a glowtech piercing by 3D Model via HeroForge, created by TJ Trewin
Humans have sensitive skin that becomes toad-like in the atmosphere of Ol'Mire - they can't safely traverse the plane without the condition affecting the exposed parts of their body. Prolonged exposure to the Ol'Mire air will change their skin permanently, so heavily wrapping up is recommended for short trips.   Some Human folk have accepted the change and have emigrated to the Ol'Mire to embrace vibrant new magic-fuelled cultures of the plane. The vast majority of Human folk have a long standing tradition about being scared or hateful of the unknown and have decided to remain in Melior.

Human folk have skin tones that can range from deep ebonies and warm umbers through to almond sands and pale petals. Human folks of Jolundrian descent typically have paler skin tones, while folks descending from warmer continents tend to have darker skin tones.

Some Human folk are born with birth marks, moles, or freckles that are usually a darker tone than their natural skin colour.
Other markings come later in life by natural causes (like age spots and stretch-marks) or by external factors like tattoos or scars.

Human hair colours are from a warm spectrum (with the exception of jet black, or the silver white hair of old age). Their hair texture varies massively in thickness and natural shape allowing them to experiment with imaginative and highly expressive hair styles.

Human folk have circular pupils and their eye colours range from muted greens mixed with grey, through to steel blues, warm hazels, and deep browns. Some folk have heterochromia where one eye is a different colour than the other, but this is a rare occurance.

Human folk conceive as most mammalian beings do, but they can increase their fertility and chances of a successful pregnancy by eating a healthy diet or by using fertility elixirs. Some folks swear by the use of enchantments and obscure rituals rumoured to appease ancient fertility gods, but such practises have unreliable results.

Human pregnancy lasts 9 months and childbirth is painful and potentially fatal if not aided with nurses and healers trained in biomagic.   Human child-bearers (and breast feeders) are advised to go on a magic-fast where they abstain from consuming any maisha produce during pregnancy. It is believed that this reduces the risk of harm to the infant as it enters the world, and protects the child-bearer from within.

Human childhood lasts until they reach thirteen years of age and is a time of physical, mental, and magical development.   Depending on their social class, some human folk may be better developed in certain skillsets than others. This can lead to a challenging life full of hurdles but there's always time for learning and catching up with skill development later in life (if you survive that long).

Human adolescence lasts unil they reach twenty years of age and is considered to be the time of sexual development during puberty. Laws vary within different societies about what age an adolescent Human is allowed to partake in different responsible activities.

Human folk reach adult maturity after thier twentieth birthday (though many still have the mental maturity of a twelve year old). Their bodies stop developing but, oddly enough, their ears and noses will continue to grow at a barely noticeable pace throughout their lives.

Humans can live to a ripe old age of somewhere between 80 and 100 years old (if they're lucky). The upbringing of their social classes, their profession, and their general lifestyle will have a huge impact on this number!

The eyes of the old tell many tales of regret, so make sure your life story is one they won't forget.
— An old Xendrian saying

I JUST LAUNCHED MY NEW SHOP! 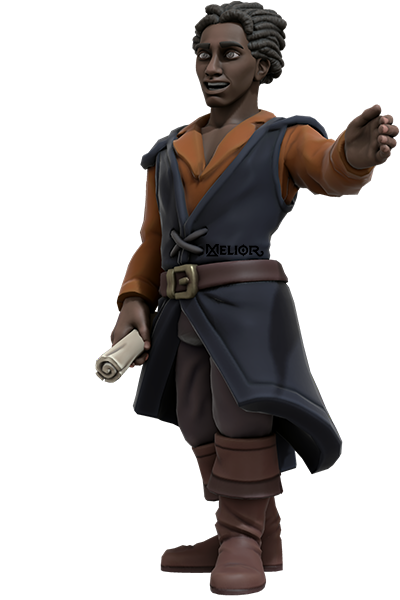 A human academic from the University of Bradstowe by 3D Model via HeroForge, created by TJ Trewin
Humans are a playable folk in Melior character creation using the Ethnis Lite RPG setting!

Human folk love to express themselves with different hairstyles, hair dyes and nail paints. Some folks enjoy permanent body modifications such as piercings, scarification, or tattoos (or even glowing ones, if infused with Glow-Jelly).

Taboos vary from culture to culture across Melior among Human folk, but generally speaking it's a big no-no to mock someone based on their appearance or ability. Many Humans feel that talking about or exploring sexual intimacy is a taboo.

Humans collaborate well with other folks but many are still very wary and untrusting of the strange new visitors from the Ol'Mire plane, as they've only been acquainted for just over 50 years.   Humans share the same ancient ancestors as Fauns and are able to interbreed. Their offspring are a hybrid folk called Capran which have different physicalities depending on dominant genes.   Humans are unable to produce offspring with egg laying folk due to the incompatibility of their biology.
Folks Playable

I love that this is the first thing that I've stumbled upon on World Anvil after the start of WorldEmber. I'm planning on writing a "human" article for my own world, so this is super-inspiring. Love the art most all. Really inspires me to add more visual interest to my articles.

Starting off WE strong! Great work here TJ, and also I absolutely love that blurred text effect you're using, it's excellent!

I see you fell into the new Hero Forge update trap as well :')

WOW! I want to say you've outdone yourself, but TJ ... you *always* outdo yourself! I love the color guides for skin, markings, eye color and so on. That's just brilliant.

I love all the pretty little details in this article like the colour blocks and the little icons. Also, the nsfw paragraphs made me choke on my tea - I hope you're happy! :D

I BLURRED THEM FOR A REASON OKAY? xD   (sorry for your loss of tea) 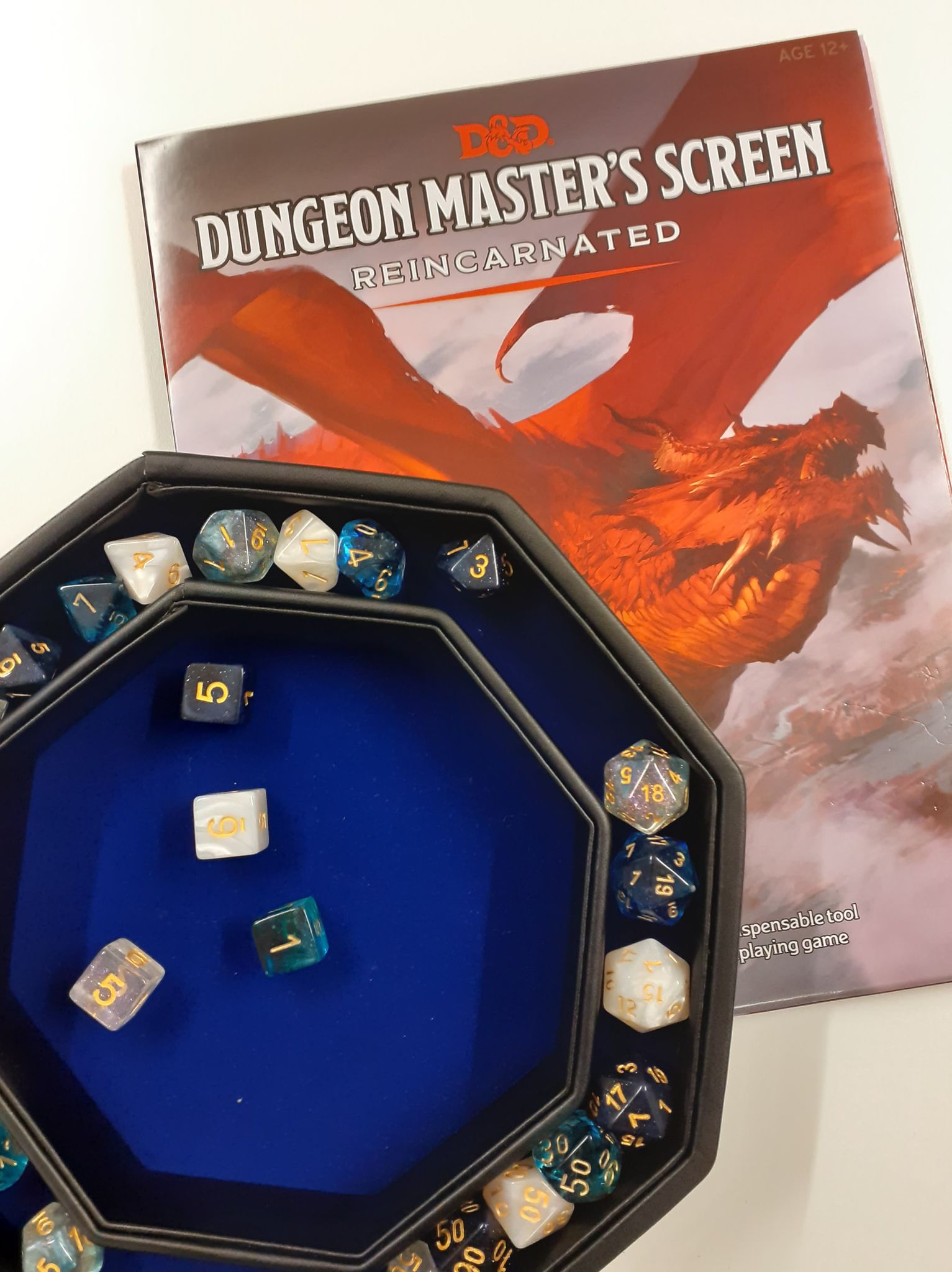