World / Character Creation / Folks / Ardean
This article is still a work in progress!
Ardeans are tall winged folk from the Ol'Mire plane. They have a broad wingspan and are capable of flying great distances. They stand much taller than Humans, and a Faun would come up to an Ardean’s stomach.   They are an egg-laying species and typically raise 1-3 children depending on their cultural background and society. Contrary to ignorant stereotypes, Ardeans do not live in nests made of sticks. They dwell in a variety of residences and architectural styles - some are at ground level but thanks to their dexterity they are able to build homes in otherwise inaccessible locations like tree tops and mountain sides. 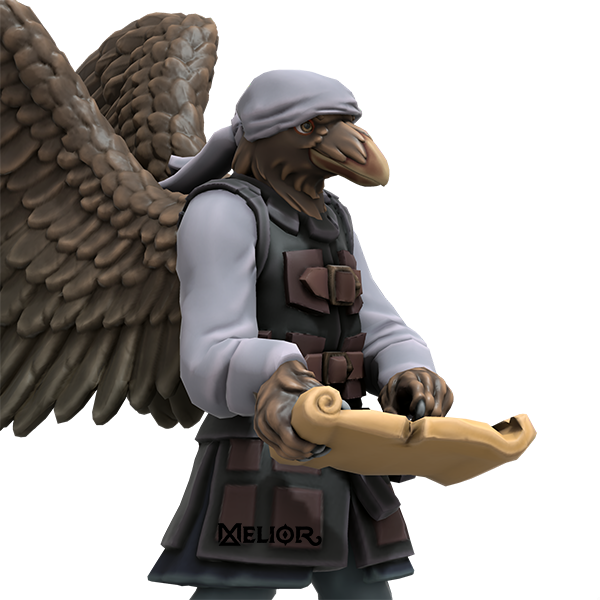 Ardeans have broad wings protruding from their shoulder blades, their forelimbs are free to maneuver and carry things the same as other folks, but carrying weighted objects makes flying much harder. Only the strongest of Ardeans would be able to carry another pesron for any length of time.   Some species of Ardeans have a sail, a mohawk-like crest of feather spines webbed with leathery skin that helps them to fine-tune their flight by tilting their head. Their eyes have a milky inner eyelid which covers the eyeball when flying (particularly when diving) to protect the eyes from the wind.
Ardeans can fly very fast, but depending on their weight, muscularity, ability, and age, they can range anywhere from peregrine falcon speed to not being able to fly at all if they are too frail or too heavy. It takes a great deal of energy to fly, and Ardeans typically need to rest after every hour of flight before they become fatigued and fall from the sky. Harsher weather conditions and coastal flight is incredibly draining and ill-advised as there’s nowhere to land and rest up.   Beak length varies in individuals, the shape varies slightly depending on where their species originated from in the Ol’Mire plane.
Ardeans can partake in aerial combat, either directly by using spears and lances with diving and spinning motions, or with aerial archery and death from above (but it requires a lot of precision and knowledge of the winds affecting the arrow or bolt trajectory).

The majority of Ardeans have grey coloured feathers, some have more of a blueish slate tint and others are more of an iridescent black.

Eye colours are a broad spectrum of colours. They can be vibrant yellows and oranges, pale ghostly whites or even pitch black.

Fertilization occurs during successful copulation and when the Ardean is impregnated they are then able to develop a single egg (multiple eggs can occur, but are rare and are often layed smaller. Hatchlings can often have deformities). The egg will develop and grow inside the Ardean for 4 months, by which time it will be heavy enough to cause the Ardean to lay it. The layed egg takes 3 months to hatch, and does not need incubation (though many Ardeans like to keep this bonding tradition and take turns to cradle the egg in their arms, or cuddle up with it during sleep).

The eggs are highly guarded, as they are saught after by predators of the Ol'Mire, curious poachers, and also egg thieves who cannot raise children of their own. The black market Ardean egg trade is akin to Human trafficking. History tells of Ardeans who were forced into laying egg after egg in captivity only for each one to be sold to the nobility. The hatched would be born into a life of slavery and servitude to the owner.

Ardean eggs take three months to hatch and their infants take 2 years to reach a stage of being able to stand on their feet and waddle around.   The hatching process can take anywhere from a few hours to a couple of days as the hatchling pecks and pushes its way out of the egg.   The egg is about the size of an ostrich egg, and can come in a variety of colours or complexions based on hereditary. Some are brown, others pale, some sky blue, some spotty. The colour of the egg does not determine the feathers of the Ardean hatchling.

Ardeans have a similar lifespan to Humans, though some would argue that they don’t live as long due to the hazards of aerial maneuvours - a fall from a great height is fatal if an Ardean cannot recover in time.
Log in to World Anvil to view
bonus content and secrets! 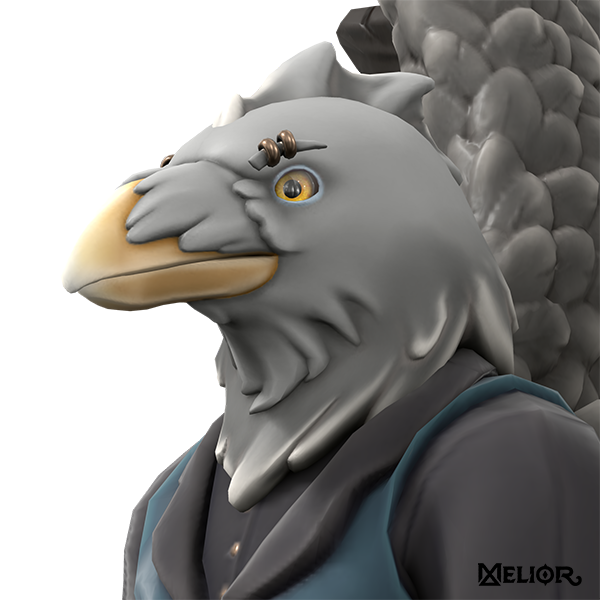 Ardean ancestors were adept fisherfolk, and modern Ardean diets still reflect this with a need for oily fatty fish in their diet to remain healthy. Ardeans aren’t exclusively pescatarians though, and will gladly chow down on a hearty meat pie and flagon of ale.
Folks

I was definitely not picturing these totally-not-furry folk SO BIG. Nice article! The part about egg trafficking and poaching is very sad, but also interesting.   (I think you accidentally a word after "hereditary")

"Still not a furry tho." xD

Oh the egg poaching and trafficking is so sad. Kind of reminds me of puppy mills. :(   These sound like a really interesting species. I like that they have a similar lifespan to humans, and their infants are comparable to ours.

I just love your species articles, and especially the use of the word "folk." That word just seems just right for the world you're conjuring (and of course I've also been growing to love it over the past years since first hearing "folx" or "folks" as a non-gendered word to swap in place of "guys").   Anyway, you rule!

There's egg thieves, but what about nest parasites who ditch their eggs for some other sucker to raise? I always thought that was low-key hilarious. :D