Run by IsaNite
The Animancer Campaign Page
Played by
Silencer201

Remove all the adverts and help us grow World Anvil!

Get a FULL YEAR of EPIC membership 50% OFF

or check out the full Guild Memberships

Cassia / Cass / Casi was a Magus of the Merchant house Dereda, based in the Hooper Chain. The Dereda family had gained much of their influence with their strong connections to the Hank & Jordan’s cooper and shipwright company, as well as their connection to the shadow society, which had used the merchant family to gain a firm foothold in the region.With the Deredas network of contacts and debtors the Society covertly moved their assets where they needed. Born into this web of collusion, Cassia was of great use to her family at a young age, for the Deredas had one more secret to tell: An angelscript scroll stolen away from the island of Svalbrynd by Cassia's grandfather, and Cassia was just what the family had been waiting for, as she had the talent and soul power to learn the secrets of this artifact.

An agent of the shadow society by the name of Amora noticed Cassia’s strong affinity for clockwork magic and took her on as an apprentice. Once her training was complete, the Shadow Society began her work on crafting Onyx Lanterns, the crux of the Societies magic. Over the years Cassia progressed steadily in her work as did the symptoms of her emerging spell blight.

One day she and her family was set upon by a creature of darkness and water, and Cassia was stolen away while her family fled. The creature, which referred to itself as Absethoshelkah, had powerful strength of the mind, which it used to bind Cassia to its will.

The creature fed upon her soul as its only sustenance until if found a new use for her: Claiming her as a tool, taking everything from her, even her last name. Cassia was used to lure others to the water and to bring new slaves and food to her abhorrent master. This went on for some time, and Cassia’s magic began to change, as her very blood was tainted by her proximity to Absethoshelkah. Her mind twisted, her incantations and power began to show the signs of this corruption by a sickly green light that shone from her cobalt eyes.
One day when she was luring a group of merchants to the surface the waters, one caught on to her ruse and did battle with her and her master. Her master fled into the depths, as the merchants had hired a monk of great skill to defend them by the name of Waazir Mandelik. Absethoshelkah left Cassia to die, but the Monk that had been traveling with the merchants used his magic and was able to free her of her mental bindings.
Cassia being so far from her home, and having little to no desire to return, attached herself to these Pathfinders. It was not long thereafter that her maladies began to manifest. Without the constant mental control and presence of Absethoshelkah she developed a debilitating stutter and severe anxiety. Being of little to no help to her saviors, they did what they could to rehabilitate her, but they did not have the means, ability, or time to help one such as her self.

Once their work was done, she was left with a friend to assist at a shop called The Little Thimble, run by a good man named Kevack Welsh. Her magic was not good for much, at this humble carpenters abode, but she could at least clean and cook. This went on for a short while, as she began to understand her place in the world. Due to the distorted nature of her magic, and her spell blighted appearance, she set it upon herself to conceal abhorred white hair and cobalt eyes, as to not bring any more trouble to her kind caretaker. She began to dye her hair black, and wearing a deep cowl, in combination with remaining out of sight for most of the day, it seemed to work well.

Her lingering anxiety and trauma turned into a severe compulsion to keep things clean and looking appropriate, for her new master. And for a time all was well. but Kevdack Welsh was old, and, after a decade, left to his home land to another island down the Hooper Chain to retire. He could not take Cassia with him and left the inn to his Grandson Grindel Welsh.

Grindel was a clever merchant and had gained quite a bit of coin over his years, and his cleverness saw through Cassias disguise. This marked the beginning of an abusive relationship carried on for two years after which he cast her out into the streets.

With little to her name besides her few belongings and a bitter sensation of loss,clings to one thought: No more masters. And in her darkest moment she remembered her saviors, the ones that gave her freedom, and the man that gave her a home. Cassia, with what little she had left began looking for a new path, one that she could call her own. But her weakness and crippled mind still plague her and the terror of uncertainty claws at her every waking hour. In the deep black waters of her mind, a terrible yet homely sensation calls to her, to serve once more, to find a new master, to be safe. This darkness has not yet made itself known, and wages a fight for her soul, the evil that was so carefully tended may yet quietly grow to maturity. Will she gain the strength to become her own person for the first time, or will that strength ultimately lie at the feet of a new master, one that will offer safety and care, in exchange for her freedom and complete subservience.

Slight of frame, tall, walks about in a hunched skulk

Final stages of spellblight, if one is paying attention they might notice her hair is dyed,

Walked hunched and in spurts of looking around timidly then followed by quick movement.

A spider brooch made out of Jade, dark robes, a deep cowl, If one were to see her uncovered most would consider her beautiful.

She believes in self reliance, and has a poor self image of herself. She believes the ends justify the means, but good should be done whenever possible.

To be a good person in charge of her own destiny, capable of standing on her own two feet.

You must survive on your own, because you might be dragged down into the dark where no one will find you to help.

Music, art, and the night sky, and clean environments, dislikes swimming, social situations, being in the spotlight, liars

Can endure many hardships, does not hold many prejudices, seeks to help others

Can break down and lash out, has the capacity for extreme cruelty, repressed anger, self harm.

Enjoys jokes, no matter how bad, has a fascinations and borderline obsession with butter and cheese

Keeps things immaculately clean, cleans her clothes ever day if able, cannot stand to be around filth.

Connection with the Shadow Society

She has a little bit of money saved, and a decent amount of clothes and cooking equipment.

Little to no social ability.

She would love a pet, and has a affinity towards other peoples animals.

she tries to speak in a quiet stutter and uses none confrontational language. 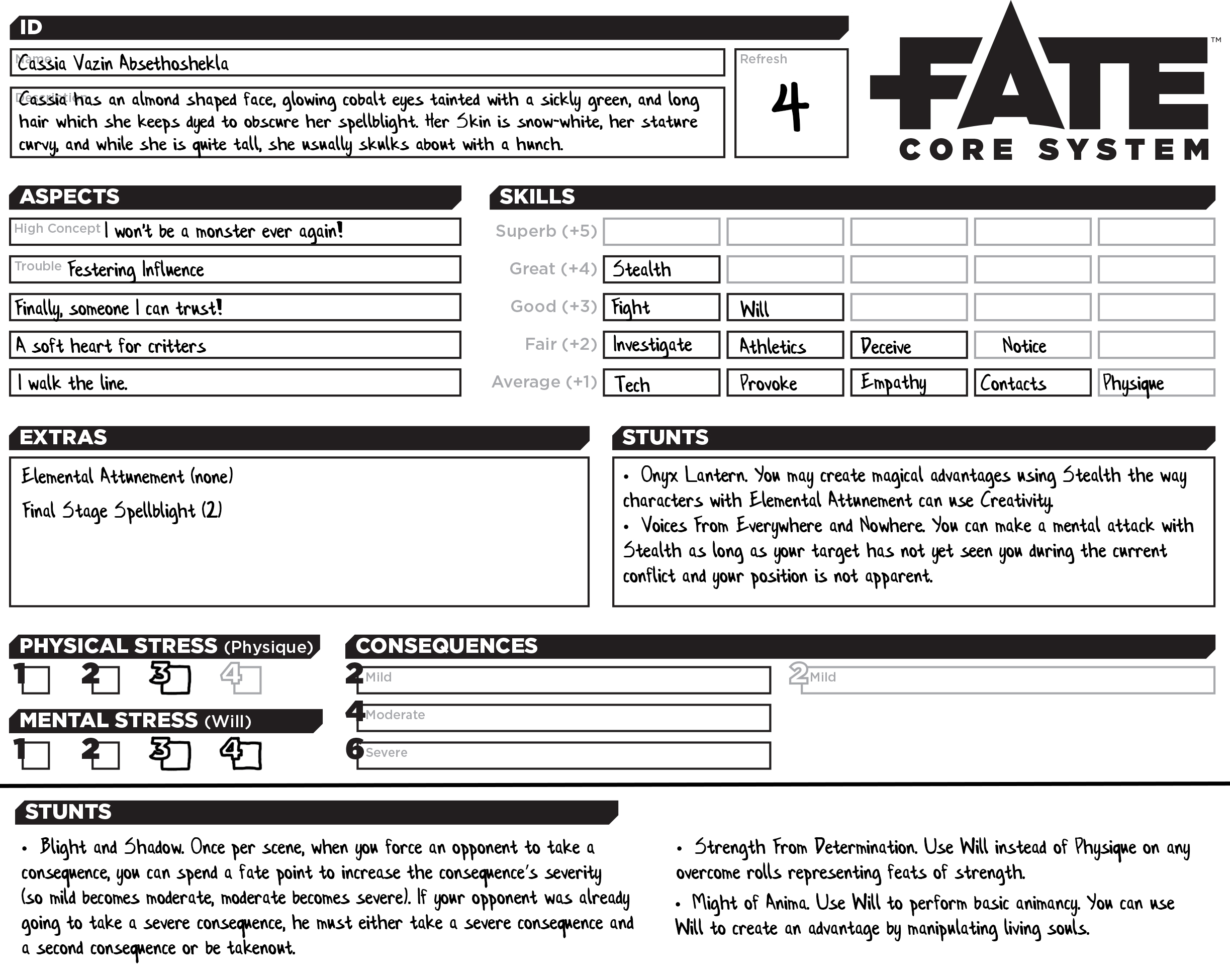 The major events and journals in Cassia Vazin Absethoshekla's history, from the beginning to today.

The list of amazing people following the adventures of Cassia Vazin Absethoshekla.