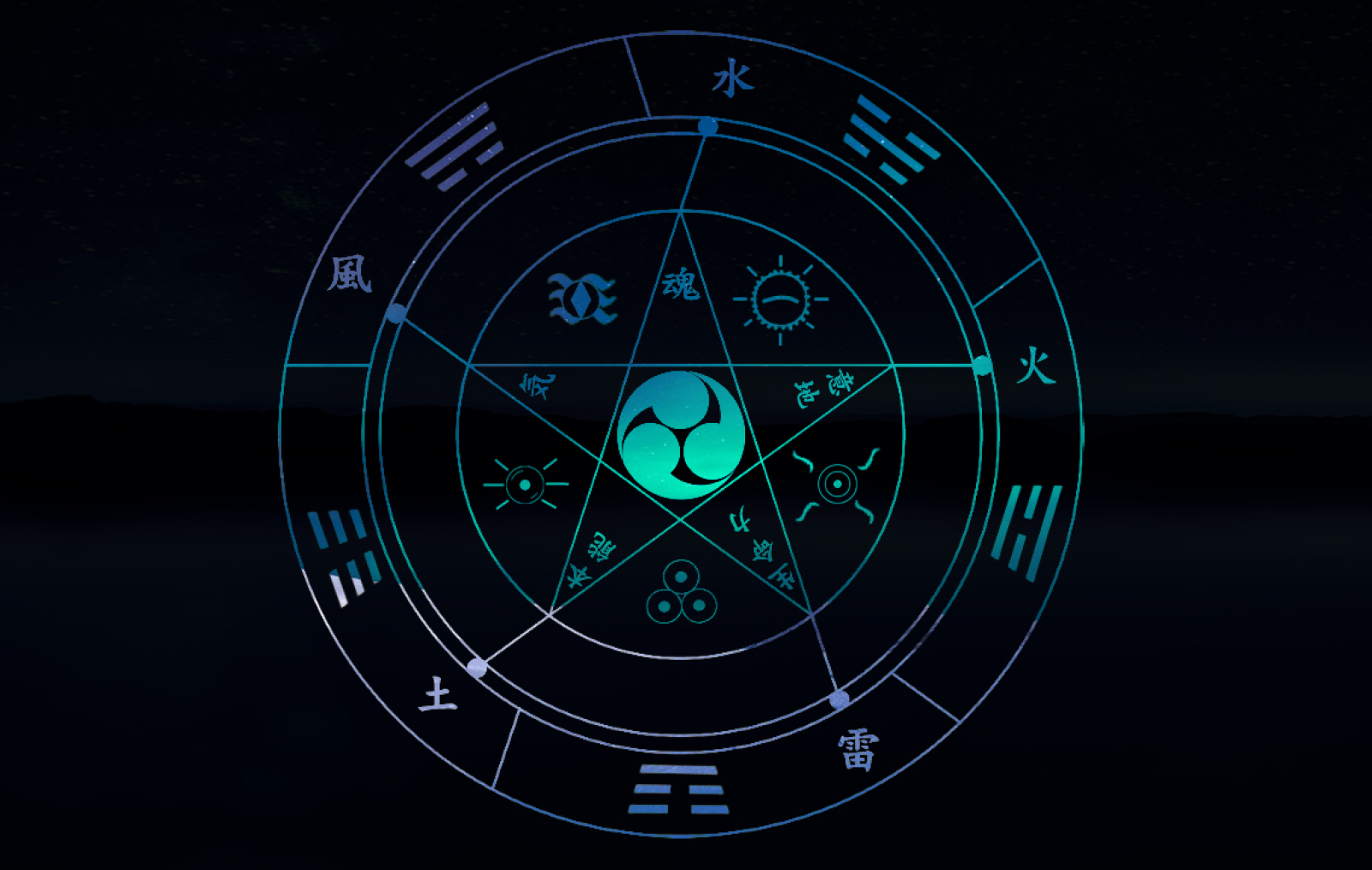 This you should know: the three basic truths of the universe are reality, existence, and origin. Existence itself is comprised of five parts: Soul, willpower, natural power, instinct, and spirit. Existence is the counter-force to reality and reality is represented by all the laws that make the universe and this world work. When we extend the reach of our soul into the real world we create an environment of existence in which our control over what is and is not supercedes the ironclad hold of reality. By influencing the shape of that environment we change reality and that is called magic.
— Plâton Rai'enjoh

Magic on Aqualon is thought to be generated by the Great Clockwork. While humans perform feats of magic, they do so by opening gates inside of their soulscape, which connect to that place.   Borealian scientists have linked the phenomenon of magic to the so-called De Vries Field, which collapses the wave-functions of uncertain particles, controlling probabilities. While humans generate powerful De Vries Fields themselves, presumably by what is called "the Soul", extending them beyond their physical form without DVF bursts from the Great Clockwork becomes exponentially more difficult due to the inverse square law.   There are three generally recognized and one obscure type of magic: Elemental, null-, and clockwork magic as well as legacy magic respectively.

Soul theory is the empirical study of the human soul. (860 Words)

Even when the world was still split into nine asteroid realms, long before the War of the Reshaping, which created the planet, people wondered about the nature of their souls and magic. Magic, of course, had to be discovered by the ancient Aqualonians, but they quickly began developing their cosmology, even in those early days, dreaming of a great forge in the sky where souls were smelted to be cast into the wombs of mothers to be.   It was the prophet Yilik, who dared to unlock the gates within himself fully and face the avatar of the metaphysical machinery beyond the veil of reality, learning many of the truths that are, even today, held as absolute by the people of Aqualon. On that day, the Soul Forge became known as the Great Clockwork, and countless people since have tried to understand its relation to the universe and the human soul.

Of the various types of magic on Aqualon, elemental magic is the easiest to attain and the most prolific kind across the globe. There are five sub-types of elemental magic: Water, Fire, Lightning, Earth, and Wind, each with its own schools. (721 Words)

Elemental magic is the first thing that comes to the mind of the common folk when magic is mentioned. There are five ur-souls that permeate the world in a sort of ether, each latching itself loosely to the elements of water, fire, lightning, earth, and wind. Elemental mages resonate with one of these ur-souls to manipulate the corresponding element, for example moving bodies of water, causing tempests, or raising the ground.

Because elemental magic is extremely useful for both landscaping and military applications, mages usually have a lot of influence in their respective societies. The great Magus Academies of the Middle Lands, for example, wield immense political power within their cities and surrounding lands.   Beyond the Middle Lands, elemental magic is also taught in various locations on the Corsic Ocean, at Ainan's Ka Hale Akamai and Nyingma's Monastery of the Five Paths, but also at HJT Corporation Ferry training camps.

Though technically elemental magic, Keeper magic varies from the regular kind in that Keepers can never blight from its use. They do not attune their souls to their element, then act as a conduit for magic from the Great Clockwork, but rather their souls are linked with the souls of their Keeper weapons and their corresponding elemental ur-soul. Their control over the element is much like a request or a prayer which is then answered with however much force they require.

Mightier than mages, only five Keepers ever exist at a time, each exerting total dominion over one of the five magical elements.

Spell ink is currently the most advanced application of elemental magic. Invented in the Middle Lands Magocracy by the The Middle Lands Magic Research Consortium, the substance utilizes magic of all five elements and can be applied to surfaces to create mandalas, soul imprints that enable the magically inept to channel their own soul energy into a predetermined magical effect.

During the Age of Awakening, when the mad magus Hestia laid to waste the city of Estwerde, carbonizing every man, woman, and child in a great plume of flame, many mages were appalled by the very real repercussions of magic misused, and some of them went into seclusion at the Walls of Weltenend. When they reintroduced themselves to the Great Land, they were clad in black and had discovered a new type of magic. They had become the first of the Brotherhood of the Null.
— Zorden Ahl, "The History of the Magus"

Null magic creates a certain field or aura, which forces souls to revert back into their containers, effectively canceling most types of magic and making elemental magic impossible. However, It can not usually affect the 'magic' of the Five Keepers.   There are also instances of null magic outside of the Brotherhood. The second most well-known group of null mages are the Black Priests of the Church of Pure Souls, who many centuries ago stole null magic from the Brotherhood of the Null to fight magic wherever they would find it.

The Brotherhood of the Null

"What Comes to Be Will Come to Naught." - A black wave washes over the land and all magic ends. (5033 Words)

"[...] these boots had powerful angel script inscribed on them and were imbued with a tiny piece of the smith’s soul. They allowed the wearer to ‘step out of the world’, a powerful trick of clockwork magic that allowed one to ignore the distance between two points by seemingly shifting one’s perspective and bending space in a way that melded origin and destination into one for a moment.   Generally, those who learn this trick will walk through lower reaches of the Great Clockwork instead of the real world, and the boots did just that."
— From "The Smelting of a Soul" by Plâton Rai’enjoh

This type of magic encompasses all other kinds that are neither elemental nor Null, save for the most elusive kind: Legacy Magic. It can have more general effects but often relates to transportation through the Region of the Clockwork. The Shadow Society for example uses a type of clockwork magic tied to their lanterns, which allows them to travel at right angles to reality. The Technamagix of Miyako Fluxum are also often based on a kind of clockwork magic.

The fundamental laws and procedures of magic are stored in a so-called "library" inside the Great Clockwork. The inner gates of people's soulscape can connect with this library and access some of these procedures, while simultaneously providing a conduit for magic, id est the powerful De Vries Field of the Great Clockwork.   Legacy magic is the rarest form as it can only be performed by connecting to old magic libraries from previous incarnations of the planet. Every time the reshaping function of the Great Clockwork is started and a new planet made from the ashes of the previous one, a new magic library with new laws and procedures of magic is created. Deprecated magic requires real-time conversion by the Great Clockwork, which uses up a lot of resources. When people employ this kind of magic, it can manifest in a myriad of ways and generally hit anyone at the receiving end utterly by surprise as reality changes around them in previously unthought-of ways.

Elemental magic sometimes manifests as a light blue glow if a lot of soul energy is released during its use; Null magic has no visual or auditory effect that can be perceived when used, and clockwork magic has varied perceptible effects and is more flashy than the other two types due to its often more aggressive bending of reality.

The blue glow of magic is best observed in victims of spellblight, who develop glowing eyes of cobalt blue in addition to their other symptoms. This glow is caused by damage to their inner gates, which cannot close properly anymore and begin to leak magic from the Great Clockwork into their soulscapes. The more unstable their gates become, the more likely their contraction of nullsickness, the final stage of spellblight, becomes. At that point they become utterly incapable of performing magic.

Huh. Really neat and complex. How long have you been working on Aqualon? It seems like it's been quite a while.

Oh, many years, though it has gone through several metamorphoses since. I wrote the first novel at 14, though I wrote that one in German and it had its weaknesses. When I started my second take, it was on a different Aqualon with more defined characters, and I scrapped that one part-way through and wrote version 3(.5), which is the current novel I am publishing weekly (ignoring the two-three weeks of slacking due to the Summer Camp...). While certain core concepts and character souls (and archetypes) have existed and continue to exist since version 1, others have gone away and new ones have joined the fold. Everything has always been quite fluid and ephemeral to me, with details coming to me as I needed them. I have never had trouble with my creative juices, when I want to write something I just do. However, I do enjoy worldbuilding and crafting of complex lore, so World Anvil has been a godsend and since I started fleshing out much of the current Aqualon here since January, it has very positively impacted the editing process of my book, with me adding more depth and detail to the world as my characters traverse it ^-^   Plus, it has furbished me with the tools I need to create rpg tabletop adventures like the Margrave's Favor and short stories like the Black Priest of Rastrowel, both things I enjoyed immensely creating and will make more off in the future ^-^

That's awesome. Super cool to see how it's all progressed and changed over time then! And yeah, WA is really helpful for keeping everything organized and structured in a way that makes sense. Those tools definitely help!