The Connection Between Mind and Great Clockwork

For the first step towards enlightenment and to unlock magic on any significant scale, an inward journey is required. This journey can be started through meditation, magical guidance, near-death experiences, or really good drug trips. It leads to a place within the so-called mindscape called "the void", which can take different shapes but is generally dark and featureless as a whole. Within this place lies one great gate of changeable appearance. Once one manages to open and pass through this gate, they enter the so-called soulscape, where the five aspects of human existence can meet face to face. These aspects are Soul, Willpower, Natural Power, Instinct, and Spirit, the last one usually being the aspect that actually arrived through the Great Gate. Commonly standing in a pentagram, two neighboring aspects hold one special inner gate, which connects directly to the Great Clockwork, forged out of different energies that arise from the synergy of these aspects.   The five inner gates are made from these energies: Enlightenment, Madness, Foresight, Wisdom, and Shadow. Opening one or more of these gates even a crack will enable the use of magic, but opening them properly can lead to superior magic and magical powers that go beyond the regular elemental magic most mages manage to manifest. 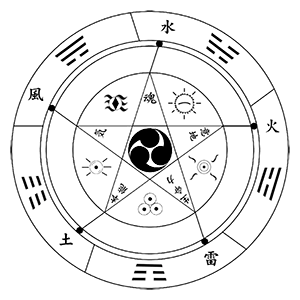 ''Taishôgeki'' is the name of a philosophy and corresponding book, written by a powerful historical figure of Aqualon. He had spent time in the realm of the Aesir and bested them in combat, traveling through the Great Land afterwards to seek wisdom in many places, speaking to many philosophers and mages of his time. Before writing the book, he fought one of the Valkyries on top of the tallest peak of the Yamato Mountain Range and bested her, and as the legend goes, he ripped her soul out of her shattered body, and forged it into a great, metal gate that connected the physical world and the Great Clockwork on top of that mountain, where he had a monastery built to uphold his teachings.

The symbol of Taishôgeki is a chart of the inner world and the Great Clockwork. In its cores lie 3 truths: Reality, Origin, and Existence, and from there on stretch five paths. It shows the five aspects of human existence to each point of the star, and between the points the energy associated with the inner gates. Beyond that, within the rings, lie the five elements, representing their corresponding ur-souls.
Natural Laws and Phenomena