Ilidari, one of the cuttest and powerful of the magical creatures that inhabit Yeia. It is "indigenous", if that can be said from a magical animal, to the region of the Sun Elves, but today can be founded in multiple other realms across the world.   Their name comes from two elvish words, Ilis which means "friendly" and Dar which means "lion". So their name can be translated as "friendly lion". But they are also known by other names such as Ruradari "flying lions" or as elven Lions in most of the human realms.

According to mythology, the first Ilidari was a gift on the god of the Sun to Prince Allyrion as a reward for the piety of his father, the mighty king Larevynn. The God said to him that no one would ever harm the young prince, and gave him an spell so that every generation of elves should have its own protecting lion .   As centuries passed by, more and more Ilidari were created or were born they became widespread among the sun elf population. Other elves from another places, specially those in today Southern Seria became fascinated by these creatures and quickly imported Ilidari from the Kingdom of the Sun Elves. Once the elven territories were conquered by the Seris, they too became fascinated by these creatures but contrary to the elves, only the imperial family was allowed to have Ilidari.

The main task of the Ilidari and the main reason of their existance is to become guardians of children. They're invoked by casting an spell, usually in the temple of the Sun God. When it appears it is presented to his/her owner. Then it is given a name, and a necklace with a gemstone is given to both the creature and its owner, symbolizing they are now connected from the rest of their life. 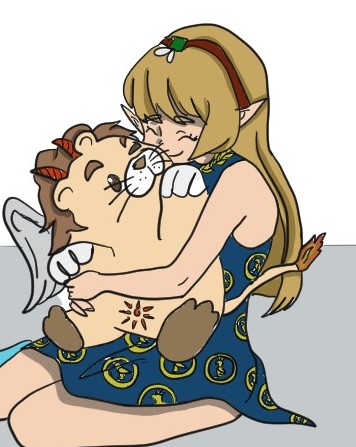 Sun elf girl with her Ilidari by Callyxtus
In the elven realms, specially in the Kingdom of the Sun Elves, the Ilidari usually acompany their owners to every place they go, to the market, to school, protecting them from danger, such as thieves, bullies etc..., and also entertaining them. During night they usually sleep over their owner's bed.   Ilidari are essencial members of every Sun elf family and during weekends families expend their freetime on the desert, camping in tents and playing with their Ilidari.

The average morphology and anatomy of ilidari is similar to a normal lion, they have four legs , a lot of hair around the head and and ,a long tail and at the top of it, instead of hair, they have a little flame. Also Ilidari display a pair of wings located at their back in the middle part of their bodies, that allows them to fly.

Usually ilidari are born by reciting and spell, but they can reproduce naturally, and their cubs being given to other members of the family.

Ilidari don't grow a lot , they tend to be the same size from the time they are given to their owners to the moment they go to the residence of the gods along with their deceased owners.

Ilidari can live in various climates because they have a great adaptability. But they seem to not enjoy living on very cold places. Usually they live "comfortably" in temperate climates as well as sabanas and deserts oasis.   Inside this enviroments their main habitat are of course human and elven settlements as being protector of children (and adults once they grew up)

The Ilidari are carnivorous , their main diet consists usually of meat, either given by their owners or obtained by hunting on the streets or houses. But also as they are magical creatures they can fed from other "unnatural" food. For example Ilidari can eat flames, as they give them extra energy and fire power. So be careful if you don't have very well educated and you're in a dungeon or cave with a torch lighted, because your ilidari might eat the flame if they're hungry!!.

The main difference with baby lions is that baby ilidari already have hair as they are a mini version of an adult lion. One of the main trait that gets affected by age is that the feathers of the wing got more colourful as time passes by.   Ilidari don't hibern but it appears his magical energy is at it fullest during spring and summer.

Ilidari usually have big oval eyes that can be either brown or black. Usually two fangs stick out of his mouth. Their nose is small but their smell senses are very good. The upper and lower parts of the head display a lot of hair.

Ilidari are mainly found in the territories of the Sun elves and in some regions in Southern Seria. But sadly or happily, depending on the point of view, Ilidari are also imported to other regions like the Blatian Empire, the Republic of Valia or the Kingdom of the Green elves. But there are very rare animals, and they're very expensive
.

Ilidavi are one of the smartest animals on Yeia. Some consider ilidavi to be the smartest magical animals in existance.   They don't talk but already can communicate with their owners with different roars. They also display human fealings, something that set them appart from normal lions and other magical creatures. They can experience happiness, anger, sadness, they can be jealous... .   Ilidari are also capable of understanding everything their owners said, and they also can learn multiple languages. As they can understand everything that it is said, they can advice their owners  in certain situations, of course, because they can't talk they can only express  through roars if they agree or not with a plan, or if an idea is good or bad, or if someone is lying or telling the truth.

Hearing is improved in Ilidari, compared to normal lions, for hearing his owner's called for help if something bad is happening. Also Smell is also improved for searching for their owners, and to search for little pray like mouses or rats.   Also sight is very good, as its common among lions, they can see their pray, and their owners from miles. But the most famous features of the Ilidari are their ability to fly and of exhale fire to defending either themselves or their owners.
Scientific Name
Leo volucer protector
Lifespan
As far as the owner 's life
Average Height
half a meter-1 meter
Average Weight
5-15 kgs
Average Length
0.5 meters

Answering: "a species of working animal"
Visit Callyxtus's Competition Page Check all other answers to this prompt Competition Homepage

I'll also add artwork for this article that will depict the Ilidari and it "cutness". Meanwhile hope you like the article