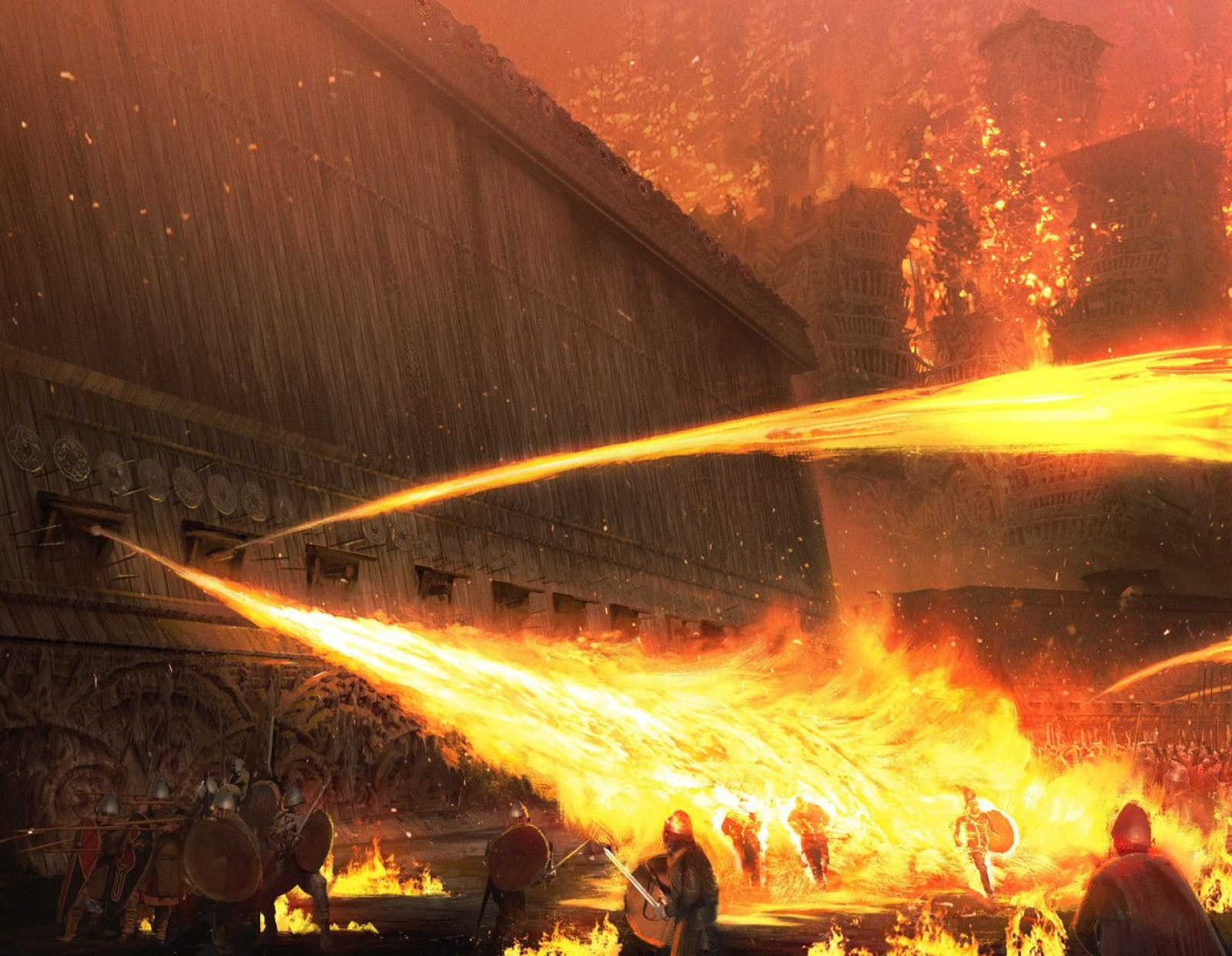 Gunpowder, also known across Yeia as "Fire of the Blatians" or "Thunderous fire", and its known to the Blatians as Zerah's fire is one of the most feared and mysterious weapons in the world. It was invented by the Ikarians around 390 AP by a monk called Orestes. The monk said the recepee for creating gunpowder was revealed to him by the goddess Zerah herself, who also ordered him to reveal the formula to the Ikarian Emperor and to use it against his enemies.    Gunpowder and specially firearms like arquebuses and muskets but most importantly canons played an important role in the latter years of the Ikarian Empire. Ships equiped with cannons, specially galleys and galleons began to appear in the Imperial Navy. The formula was only known to a few officials at the Empire's most important ports, like Blati, Valia and Vecus. When the Ikarian Empire fell only Blati and Valia had the formula of gunpowder ( in Vecus it was lost due to the political turmoil and civil wars). This secret weapon allow the Valians for example to score a crushing and humiliating defeat to the Seris in 561 AP who secured the Republic's independence.  The Blatians also used it to devastating effects in the two sieges of Blati, both in 512 and 650 AP, both at the wall towers and at sea on board their ships.  The Valians would also use it to defeat the dark elf fleet in 711 AP when they formed the so called Combined fleet with the Seris Imperial Navy to protect trade from Seria to the Nari kingdoms.    Its noise and its lethality have made it the most feared weapon across Yeia. And its secrecy and mystery outside the Blatian realms also helped to spread this fear.

Gunpowder is used mostly in warfare, either used for firearms or for cannons. Blatian armies are famous for besieging the strongest fortifications with this type of artillery. Specially renown are its musketeer core. They are elite units recruited from the best range units of each of the Blatian legions and they usually form a screen in front of the first lines of the legions wreaking havoc upon the charging enemy units.  No one is safe of their deadly bullets made of iron, not even the heavily knights of Western Teria and North- East Karia, who had experienced their power first hand. 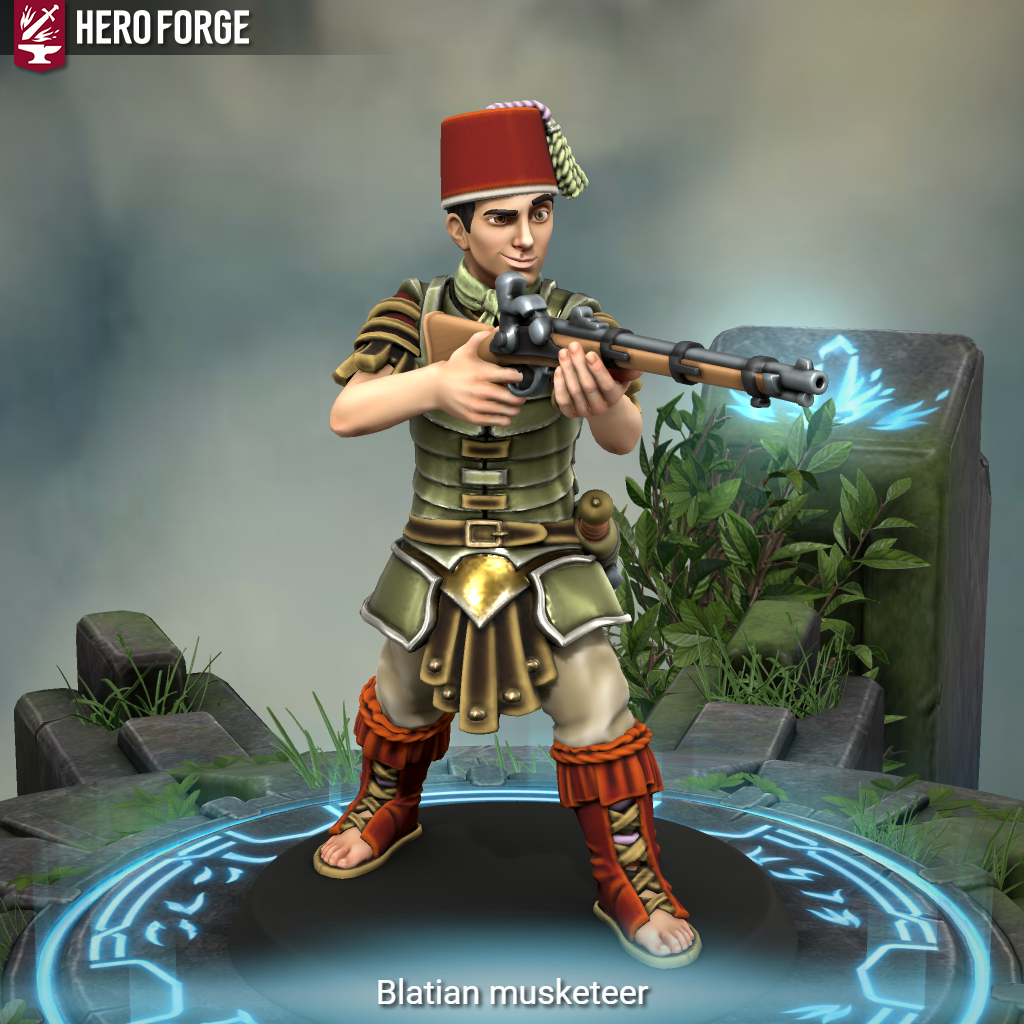 by Heroforge
In both the Republic of Valia's navy and the Blatian Imperial Navy, each trirreme, quatrirreme, quinquerreme and galleon is armed with cannons and also with a regiment of musketeers that provide fire from the ships in support of the marines.  These crews are highly specialized units, specially those managing the cannons.    Also in Valia a new use has been found to gunpowder in the form of fireworks. Each year during the festivals dedicated to the god Abina and the goddesses Pyra and Zerah fireworks can be seen from the capital's harbour and they have become a very popular touristic attraction!.
Access & Availability
The secret of elaboration of gunpowder is only known to a select group of people both in the Blatian Empire and the Republic of Valia, usually high ranking officials or trusted members of the imperial court (in case of  The Blatian Empire ). Both gunpowder and firearms are elaborated in secret arsenals at Blati  and Valia, heavily guarded by the Imperial Guard or the Marine Corps and then distributed among the legions and fleets of these two Blatian states.  The text of the recepee of the formula is also encripted following a complex code that prevents anyone but the guardians of the formula to understand how the Blatians most secret weapon is elaborated.

Remove these ads. Join the Worldbuilders Guild
technologies and vehicles

Answering: "A technology lost, forgotten or shrouded in mystery."
Visit Callyxtus's Competition Page Check all other answers to this prompt Competition Homepage