The Elf-King of the Kingdom of Amredhel is the son of Thirion Elf-King. His father presided over the worst defeat that elf-kind had ever suffered.

The Crown Prince of Amredhel and all of Cabron's older siblings were killed in the tragedy of the First Armada and the War Against the Far Realm. Thirion's last remaining child, Cabron, was an infant, unsuitable to take over as monarch. Cabron went with the first Entulesse to Faerie where he would grow to adulthood at an accelerated pace. As a few years passed on Erathia, Cabron aged 100 years in the Feywild. Upon his return 10 mortal years later, the old elf-king gave up the throne and departed for the Lands Beyond.

Cabron was the unexpected child of Old King Thirion's dotage, born to his seventh and last wife. He was already ancient when his other children, along with the million elves of the First Armada, perished. In desperation the ambassadors of Amredhel made a bargain with the Archfey to create a colony of elves, called the Entulesse, in the Feywild. Cabron and his generation of elves were the first to grow up in the Quicktime and return to Erathia to help repopulate the elven nations.

Sometime during his fostering Cabron acquired a pair of antlers growing out of his head and the ability to change his shape. The wizard's of Hartshome Forest suspected that a changeling had been returned to them, but their divination magic confirmed that the antlered elf with a crooked smile was indeed the Crown Prince of Amredhel.

As soon as Cabron completed his Cabed Maitulie (Return to the World Ritual), Thirion retreated to the Lands Beyond, making Cabron the new elf-king.

The older elves do not understand and his strange ways. He came back more fairy than elf, but he also loves modernity. At his direction, Eladriel is becoming a modern nation. He allows trains to come to the edge of Hartshome Forest and he loves airships and hex crystal magitech.

Despite his love of the new, Cabron Elf-King takes his duties seriously. Like an Archfey Lord, he holds the laws of Hospitality, Reciprocity, and Gift-Giving in high regard and the elves have followed suit. He personally attends to the old Feasts and Rituals, taking his role as Elf-King and Patriarch of Church of the Moon seriously.

Cabron has fathered many children, sending them into the Feywild to return as Entulesse. They form the vanguard of his armies and he is very proud of them. However, he has yet to marry. He has not yet chosen to legitimize any of his offspring and no new Crown Prince or Princess has been chosen.

His great great grandmother Queen Mother Aphedril watches over the rule of her descendant with consternation and concern. She knows that the elven people need a strong and vigorous ruler to lead them into this new age. She is unsure that this strange fey elf is up to the task. She begs him daily to name an heir, but he continues to delay.

Sometime during his childhood in the Feywild, Cabron grew silver antlers. 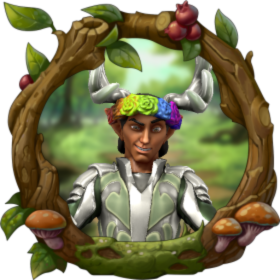