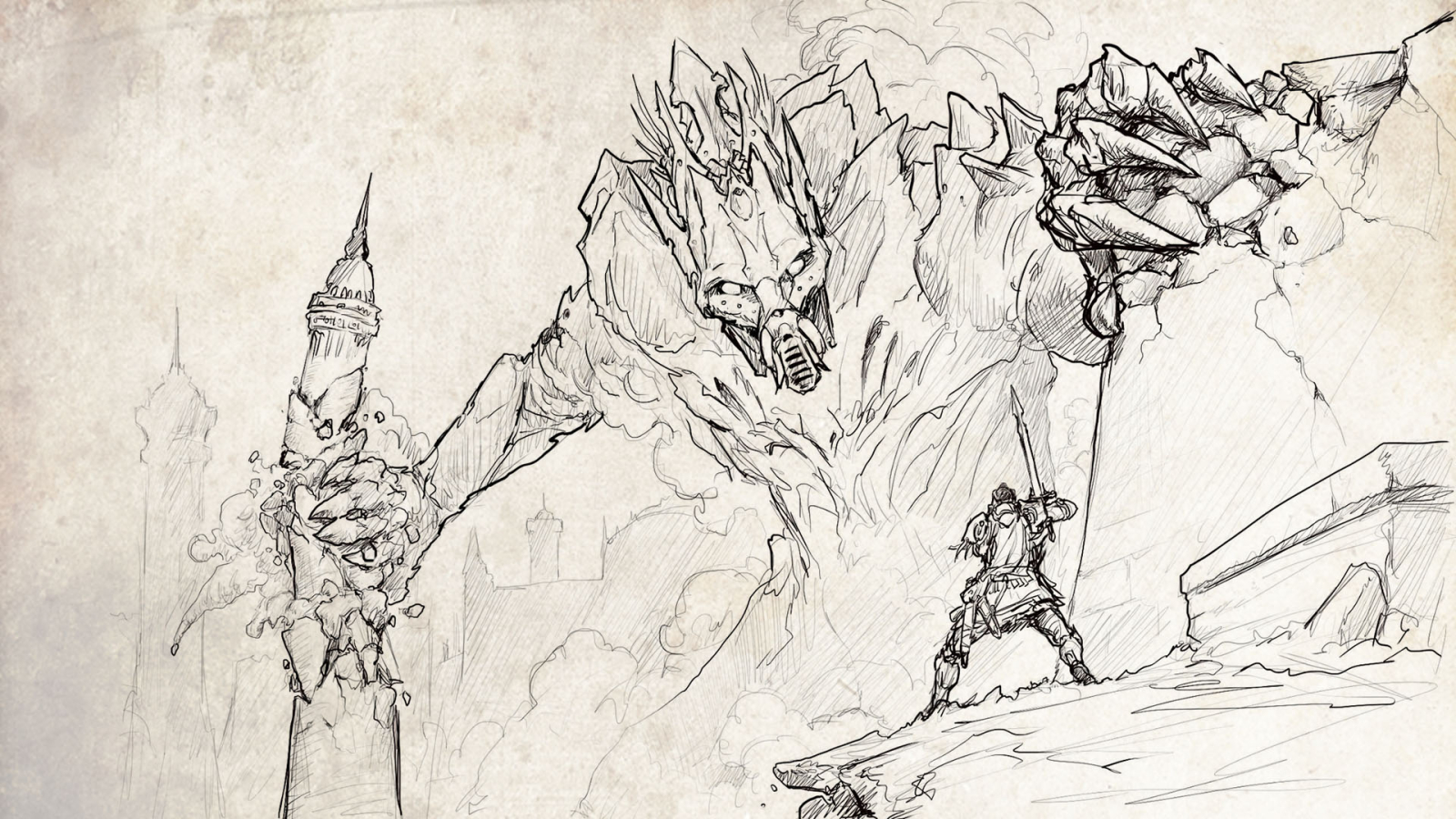 More and more Gods arrived in Vitallia. The Sentinel tried to fight them all off, as they kept going after the power of the meteor that was rooted deep into the core of the earth. Races of people had been created by the Sentinel and were now spread in various continents and most of them were fighting too. The Sentinel had created the races but their free will had led them into different sides, and as a result, some were fighting for their creator while others sided with the Gods and some even fought each other. The heat of the battle peaked and during these years, due to strong forces of magic, the shape of Vitallia changed. Huge pieces of land drifted apart, forming new islands while mountains rose or shrank and rivers dried out. Humans were divided into two fragments, half of them headed west, to the lands now called Caran and Orkandus, and the other half stayed in central Vitallia, around the settlements built by the banks of the Fork River. The Elves followed an Amar named Laira who led them towards the safe lands of Exotia and trough the power of her people, she became the First Phoenix, binding her life and that of the elves together, in order to protect them.

Seven young mortal wizards grouped together and they were rumoured to be the most powerful wizards of mankind. Together, they composed the books of First Magic that contained the most powerful spells ever recorded in Vitallia, after they had observed and absorbed the power of the Gods. Four of them were brothers. Taarum, Sokar, Akreyn and Misandria Thiaspis, who excelled in Necromancy and its secrets. The other three were Orgon Arum who decided to follow Laira to the east, Sildofar, a Gargoyle who followed the Humans to the western lands, and Laraskul the Oracle, who could see visions of the future.

The four necromancers that remained to the west, decided to act against the great conflict that was slowly destroying the planet and its people. Since they did not possess enough power to counter the Sentinel or the Gods directly, they decided to open a Gate to another dimension and summon the most powerful entity possible in order to end the dispute. The summoning would only be temporary and the entity would be bound to the gate, giving the advantage to the wizards in case of error. The wizards performed the ritual and the gate remained open for three whole days and nights without result. After the third night, four powerful entities came into Vitallia through the gate and landed in different places. The most powerful one, landed in front of the wizards who approached to greet it.

The form they witnessed was not different from that of a regular warrior in heavy armor. A black caped knight by the name of Nedel was now standing before them, and the aura they sensed was far more powerful than anything they had sensed before. When the wizards approached and briefed him, they realized that Nedel did not intend to submit to their will. They threatened him with exile but he destroyed the bond that held him to the gate, freeing himself from the wizards with ease.


Meanwhile in Central Vitallia, three new forces had just arrived, one was Justar, the other Solisis and the third one was Arkallis, three knights that were traveling alongside Nedel and entered Vitallia through the same Gate. They gathered the humans of Lothen and some of the Gods that were present and informed them of Nedel’s terrible power and the importance of his immediate demise. Gods and mortals agreed to form an alliance against him, waging a Great War. Maldagar offered to communicate with the Sentinel and offer a truce between them, in an attempt to unite against the common enemy. When they reached the Crater, the Titan listened to them and agreed to fight together.

And so the great battle began. The power of Nedel "The Hunter' could not be matched. Every strike he landed, inflicted a wound upon flesh or land that would never heal. The damage he had caused was irreversible. Gods and mortals came close to him, and they died by the dozens, just by sensing his aura and their souls got trapped in his giant cloak, feeding him with even more power. Nedel was attacking the Sentinel and each time, along with a wound, a river would dry out and a piece of fertile land would turn barren, causing the planet to suffer. Nedel then opened a gate and from within it, he called forth creatures that he held bound to him, to fight along his side. Souls from the desert of Atram, the dimension he crossed before he entered Vitallia. The souls arrived through the gate and fought against the mortals and the Gods of Vitallia in the lands around the Crater. The battle lasted for years and Vitallia grew weaker and weaker. Thousands of mortals died and many of the Gods suffered defeat, death or fled from the planet.

When everyone realized that the power of Nedel could not be dealt with, the Sentinel made a terrible decision. In order to save the largest part of the planet, it sacrificed a huge piece of land. It drained energy from the western continent, removing all of its life force and with this energy, it started to form a wall made of Amber, and the Gods pushed Nedel behind it. The Cell grew tall, covering all of the continent, and locked the God inside it. When the prison was formed however, a terrible reaction was triggered, that inflicted a mutation upon Nedel, and all of the creatures that happened to be locked inside along with him. Their life force was drained, leaving behind only fragments of their being. Nedel was imprisoned, but inside his Cell, he was an absolute monarch, second to none.

Towards the end of the battle, the Sentinel was so weak that it had to return to the earth and rest for years. The Gods agreed to remain in Vitallia, not to hunt for power, but to help restore the damage that had been dealt upon the land, and protect its races, as well as the planet.

Four wizards call forth an entity to intervene in the conflict between the Gods and the Sentinel. Not one, but four deities answer the call and Vitallia's fate changes forever.
Date of Setting
200-1 BC
Related Species
Related Locations
Related People
Short Stories