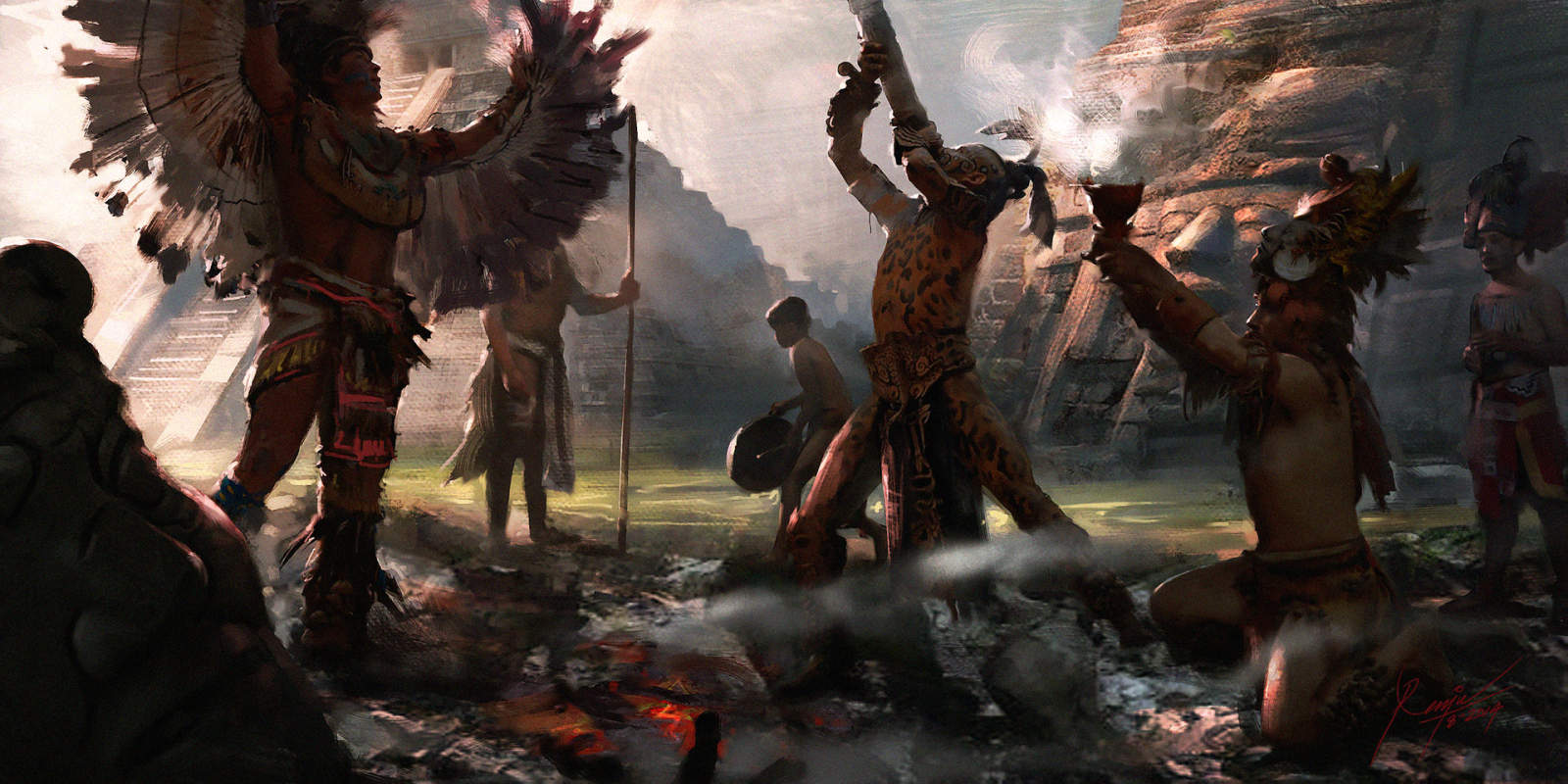 In centuries past, toik villages ensured that their seed spread to only the most worthy by holding contests of strength and skill.   Every three years, there was a three day wrestling competition organized by the leaders of several clans whereby male participants declare for a suitable female from any family and wrestle their rivals in a series of rounds from dawn to midday.

Ethnicity | Jun 1, 2020
Achtoqueztli adopts the toik tradition and adds knifes as the only allowable point of contact.

The only body parts that are supposed to be hit are the legs. Nothing else.   If a clear cut has been made towards the arms, torso or head is an immediate disqualification for the person who inflicted it.

Like with the yaotl style, intentionally killing the opponent is not allowed.   Regardless, people do die when an import vessel is severed.

No other tools, beside the knife blade, can be used to strike at each other. That includes the combatants' fists.

The original intent of the wrestling contest was to impress a family for marriage prospects. That has carried over in the achtoqueztli, though somewhat informally.   There is no cultural obligation to even consider a winning combatant for marriage, but there is certainly greater clout or prestige in marrying the final champions.

A consequence of losing a fight is willing thralldom to their conqueror for a period of 2-3 years. Their labour contributes to that winners' families' output in their farms, crafts, domestic chores or other work needed.   This is often an opportunity for young men to learn technical or more specialized skills while living with the other family. It is also an opportunity for new romantic connections to form in their adoptive community.

Any knife type is allowed in the achtoqueztli. Many artisans and amateur craftsmen can design a spectrum of small bladed weapons. One feature that has come to distinguish a obsidian contest knife is blading on just one side of the wooden holder. The other side is left blunt to block the rival's attacks without risk of chipping the blades meant for slicing. 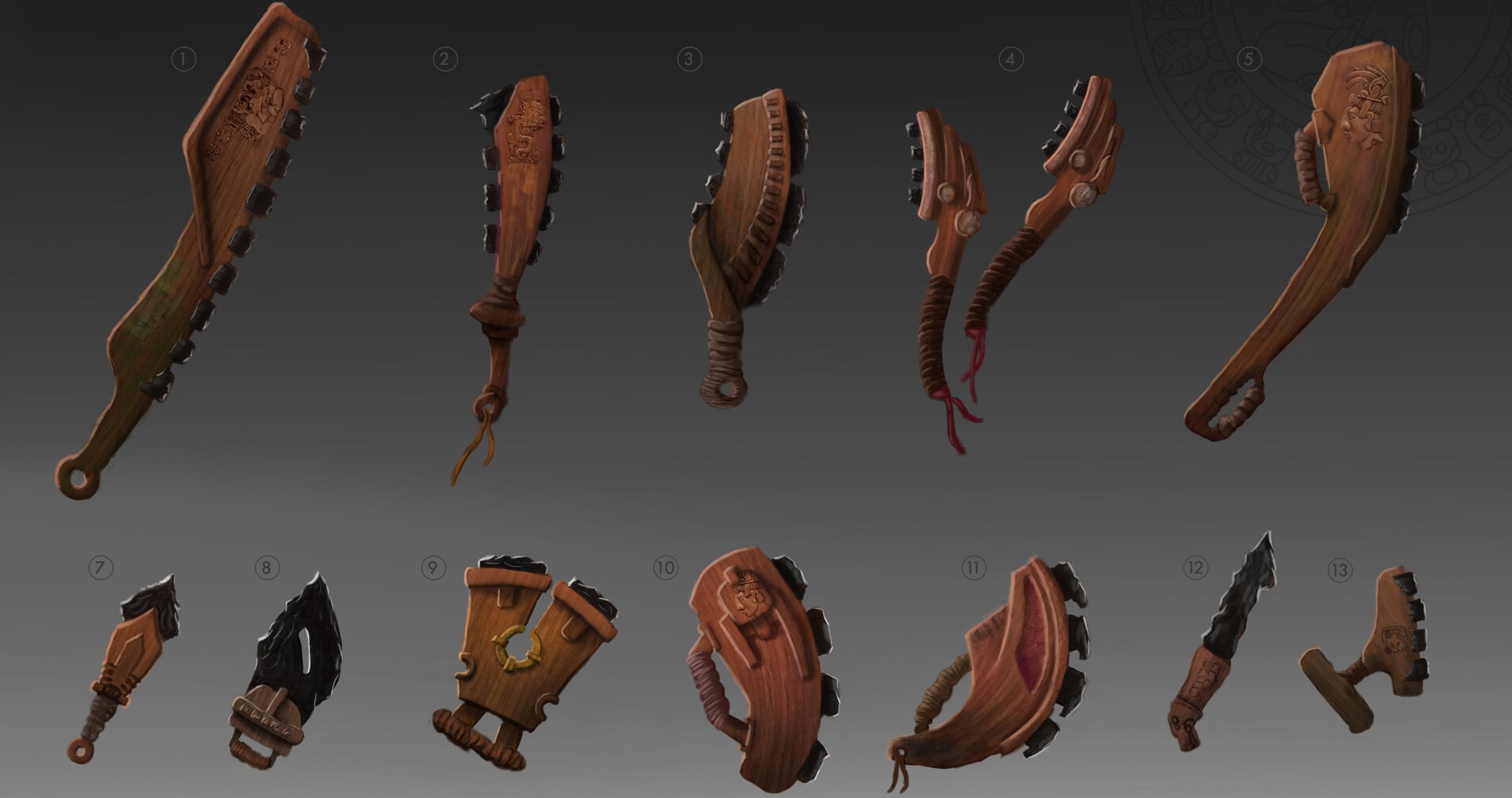 Mayan Weapons by Wilfredo Delgado
A classical and common choice preferred by most cultures as being the easiest to sharpen
An expensive and respectable choice that may not serve better obsidian but marks the users as rich
A cheap and disposable alternative that marks the user as poor.

As the colhuacans' bitterest enemies', they have used the opportunity to bleed their rivals from across the waters. In turn, alot of their defeated opporntents stayed in Coyoacan when their labour period was over.

The colhuacans are the driving force of the competition. Their home plays host every year and are seen as the inheritors of toik tradition.

Where the range merges with the valley floor.

Step folk travel the furthest to participate as a means to encourage growth and immigration towards their own homes by winning converts.

The triennial event is now judged by professional referee seasoned in the sport. Fathers of marriageable girls used to fulfil this role, but are now spectators looking for particular qualities in any future son-in-law. So being one of the champions does not mean that the father would approve.

The afternoons are spent in social festivities where the women being fought over are invited to interact with their suitors and potential suitors, if they do not already know them. Only the woman's champion of the day was not allowed to talk to his intended without the expressed consent of the girl's father, which he is not like to give until the last day.   It was not that the final champion for the wife-to-be was guaranteed to wed a family's daughter. He still had to impress the family patriarch with their wealth, reputation, entourage, prospects or general performance in the contest. The girls' feeling are also put into consideration through the mother's influence on the father.
Alternate Names
First Blood

Final champions are combatants who won every fight they fought during the three day period.

Day champions are combatants who won every fight they fought in a given day.

Round victors are combatants who just won a bout with one other opponent.

Competition Homepage
In response to the prompt I want to woo the person of my dreams. In your world, how do I go about this?