Item type
Clothing / Accessory
Formal attire of the Ardenian imperial court follows very strict rules, because the ruling class aims to distinguish themselves from the other minorities in the empire and to fully establish the Kosaris' noble status as a priviledged nation, especially following the turbulent events of the Restoration period.

"If you want to make it far in politics, women are your best friends."

Women fashion is not just a pretty thing to look at, it is most importantly a careful way to display influence, wealth and status of one's family. One well versed in the court fashions might be able to discern subtleties between different factions and alliances simply through gazing onto one's bracelet. While the cut of the dress follows the same pattern all thorough the empire, the fabrics, materials and accessories used carefuly sort the entire society in their proper boxes, where they belong. Wearing the wrong kind of dress is seen as an attempt to deceive the empire and such can be punished as any other criminal offense. The higher in society you try to climb, the stricter is the guarding of these rules.   Fabrics are often bright, rich, and embroidered, with bizarre silk being the most popular. These silks are characterized by large-scale, asymmetrical patterns featuring geometrical shapes and stylized leaves and flowers, influenced by the recent boom of overseas exploration and many imported artifacts from new and distant lands. They feature bold colours, use gold and silver threads frequently and most often feature distorted botanical motifs.

Parts of the dress

First important part is the chemise, a white loose fitting undergarment with voluminous poofy sleeves. While they were mostly plain and served more as a protective layer between the expensive fabric and human skin, when it comes to the imperial court, they often featured intricate lace inserts or silver embroideries.   Next came the first layer of petticoats or very loose harem pants that are more popular in certain famous military noble families or women who like to partake in hunting or horseriding. After that followed a tightly laced pair of stays used to achieve the coveted long and lean silhouette. Then followed a bodice heavily decorated with pearls and ribbons. Shoulders are nowadays left uncovered and bared to give emphasis to the jewelry of the wearer. Then a bum-roll was tied around the waist to support the following skirts of which there were at least two. Sometimes the top overskirt was drawn back and pinned up to display heavily decorated or lacy petticoats or underskirts, again, depending on the rank of the wearer and their current agenda.   For less formal occassions and in private quarters, wearing a mantua is becoming increasingly popular. Mantua is a loose long gown, with long, flowing lines and few seams, cut from a single piece of fabric. It was worn over a contrasting stays, stomacher and a co-ordinating petticoat. Sometimes these long gowns were belted with ornate bands of embroidered cloth or a string of pearls for a more closed look. While not exactly suitable for attending any formal event of the court, these types of gowns are most often depicted on the paintings of the noble ladies and their families.   As for the hairstyles, hair is most often worn in a bun at the back of the head with a cluster of tight curls framing the face, with one or two long curls hanging gracefully on the shoulder. Sometimes those were replaced with braids. Some hairstyles include a frilly cap of lace or small turbans lined with pearls or flowers, depending on the family the woman belongs to. 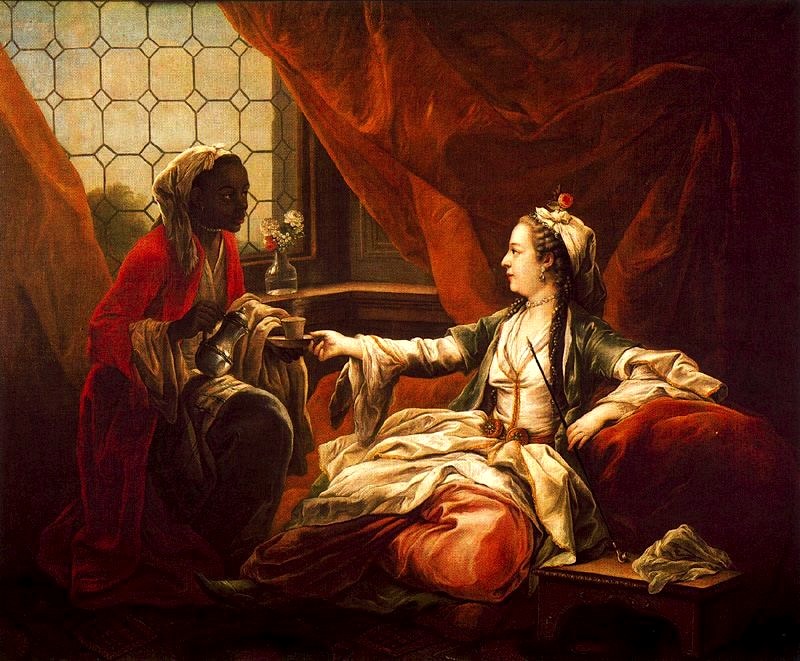 This is a concept article for the imperial fashion of Windrule, a 7th Sea campaign I am playing in! I am picturing this as a mix of mannerism, baroque and turquerie and I aim to develop it further with time.

Nice article! I love the historical influence and the emphasize on the importance of dress in society and politics :D You could maybe add an example of that, a bit of narration with someone looking at another person and deducing stuff about them based on their look.   I have one remark regarding the tense you're using to write the article: you're shifting between present and past, and I think you want to stay in present since this style of clothes is still worn in your world and it's not something that people used to do and don't anymore :p (it's a mistake I've made and I've seen several people make in this challenge, defaulting to writing in the past tense because it's what is used in the historical sources we look at for inspiration)

Nice article! It is quite interesting how important it is to wear the correct clothes and that for some of the higher ranks you can actually be punished.

Really nice work. I was especially struck by the line "One well versed in the court fashions might be able to discern subtleties between different factions and alliances simply through gazing onto one's bracelet."